(Mighty) congratulations all round 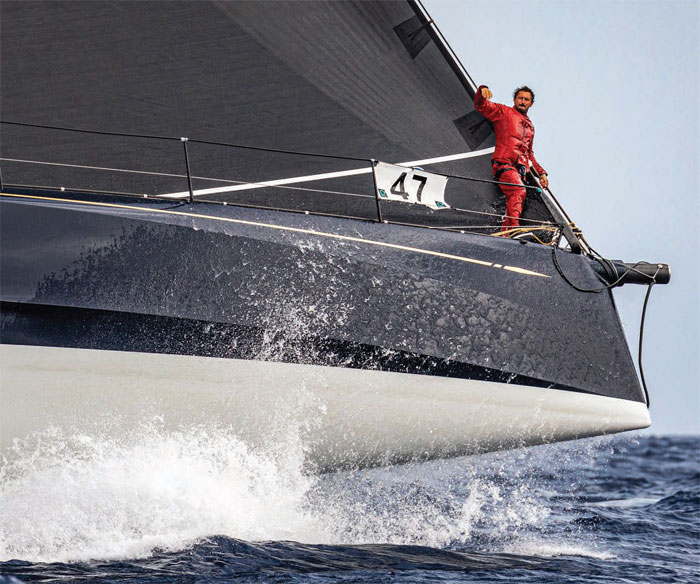 When the first ClubSwan 80 made its racing debut at Porto Cervo in September more than a few of those most closely involved were collectively holding their breath. They need not have worried...

When Nautor Swan announced their new ClubSwan 80 at the Düsseldorf Boat Show in 2020 they knew they had set themselves an ambitious goal. But what they and indeed everyone else hadn’t predicted was the arrival of a global pandemic that would turn the world on its head. Almost two years later and with the ClubSwan 80 afloat and with early results from the racecourse now declared, the project is still raising eyebrows and the reasons are clear.

This is a stunningly good looking, high-performance carbon racer, but one that has also been created to be a strict owner-driven one-design. These are factors that place her in a category of her own from the start, but there’s more. This is a carbon composite rocket ship that can be reconfigured in hours to be a performance cruiser, capable of being sailed shorthanded. And even then, with all this in mind, the final key objective is arguably the boldest, to ensure that she can fight it out with the best in a handicap fleet.

It’s difficult to imagine a tougher design brief, but as one of the longest running and best-known luxury boatbuilding companies in the world with a reputation for delivering, Swan’s size and experience is frequently their trump card. Having said that, they also knew that one of the biggest challenges they would face was not something that they could necessarily control, the owners themselves. 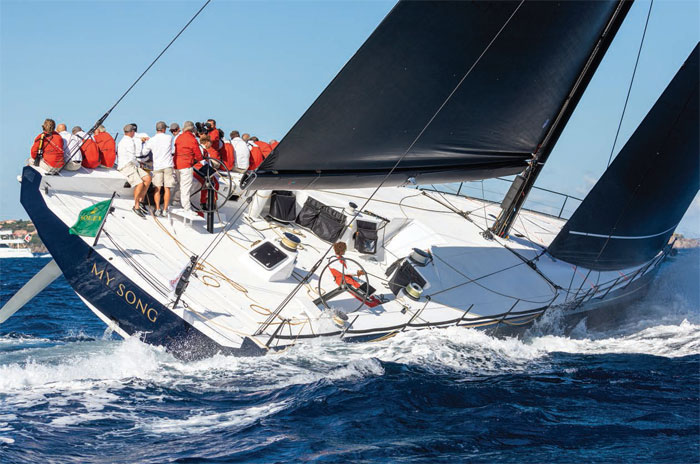 The cockpit is notably clean thanks to the absence of grinder pedestals. The winches are all powered instead

In the maxi world, creating customised racing machines for campaigns that start with the building of an impressive technical and sailing team staffed by some of the most experienced people in the professional sailing world, is often the preferred route for owners. Here, success begins on the drawing board and follows through step-by-step to the racecourse. As a result, a project that is based on an identical platform and strict class rules that forbid any performance changes is less likely to appeal.

So, what made Nautor think that their project could buck the trend and what is so special about this new 80-footer?

The answer stems from experience. Easy to say, difficult to substantiate for many, but Nautor have some compelling evidence to support their claims.

From the original Swan 45 through to the latest and radically styled ClubSwan 36, the ClubSwan circuit has been extremely successful. At the recent ClubSwan Worlds in Valencia this class was the biggest with 16 entries enjoying some consistently close racing day after day. Like the others in the range, this is an owner-driven boat and not only has no other company manged to build such a successful fleet of one-design 50 footers, but when they launched this radicallystyled boat many doubted whether it would work and questioned whether owners would be prepared to buy into a one-design class when there were so many alternative routes. But today the ClubSwan 50 fleet has been a clear winner.

A maxi-size gap to fill
In addition, with the ClubSwan 36 at one end of the scale and the super-maxi ClubSwan 125 at the other, there was a gap in the range as well. And while they were keen to fill it, Nautor’s ongoing success delivered a challenge when it came it building the 80, namely their own yards were already full. Instead, they engaged in a strategic partnership with Persico Marine. This alliance not only ensured that the standard of build would be synonymous with Swan’s, but in conjunction with Persico’s reputation for precision the partnership was likely to deliver more than the sum of its parts. And with boat number one, My Song now afloat and having taken part in her first regatta, the Maxi Yacht Rolex Cup, the evidence is already there. 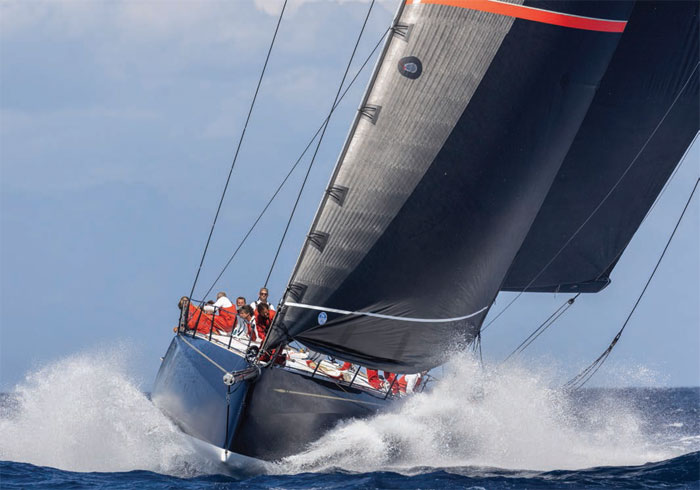 Overall, it’s easy to see some of the influences in this design. She was drawn by Juan Kouyoumdjian, who also created the 50 and the 36, two models that deliver the first clues as to where the 80 gets her distinctive, minimalist, low windage appearance from. But while Juan K has a reputation for pushing boundaries and exploiting extremes, the 80 is a design that is surprisingly modest and instead combines the best of the best to achieve a powerful and manageable beast while also satisfying the original brief. 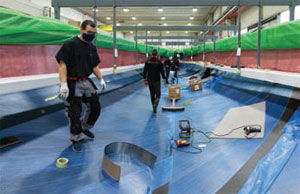 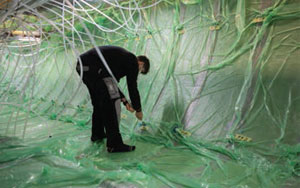 Above and below: Built by Persico Marine, which has produced many of the world’s most advanced and innovative grand prix racing yachts in recent years from America’s Cup challengers to Imocas, the full carbon construction of the ClubSwan 80 is truly world class 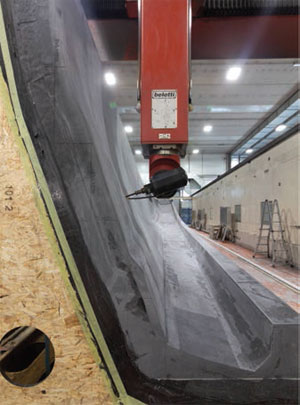 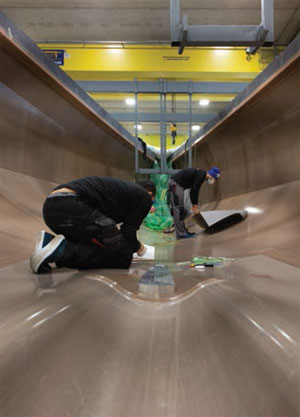 ‘The ClubSwan 80 is a new chapter in an ongoing story,’ says Giovanni Pomati, Nautor Group's CEO. ‘As part of the ClubSwan range she is a Maxi designed as a pure racer with high-performance built in as standard. At the same time the ClubSwan 80 offers the possibility of adding comfort, so owners can opt for racing or cruising to meet the needs of the moment. It is a bold and innovative solution which offers a diversity of choice. Evolution has always been part of Nautor Swan DNA.’

On board, the simplicity of the wide open, shallow cockpit is striking. Aside from the single mainsheet winch slap bang in the middle of the cockpit just next to the navigator’s access hatch, the area is notable for its clutter-free space thanks to the absence of winch grinding pedestals. Instead, the 80 has powered winches. So, whether trimming the jib or mainsheet, this is a design that has swapped biceps and brawn aboard a boat that is controlled largely by fingers and toes.

The ingenuity beneath details such as the push-button controls at the steering pedestals for the canting keel and lifting/ tacking canard belie the sophistication of what lies deeper within and the innovative thinking around the concept as a whole.

‘At just over 19 tonnes this is a very light boat for its size,’ explained Juan K. ‘We have achieved this in part thanks to the canting keel which allows us to generate the same righting moment with about 25 per cent less displacement. This also meant that we could go with a shallower draught.

‘It’s also interesting that when you compare the hydraulics for a canting system with those for a lifting keel, the canting system is lighter and less complex. Because the keel fin is being used to hold the bulb it is not driving the boat upwind so in this case we have gone for a canard that is sitting in front of the keel that can be rotated plus or minus eight degrees in order to reduce the leeway and optimise the performance of the boat.’

Meanwhile, elsewhere on deck there are other examples of simple, clean styling that conceal refined thinking within. The pit area is one such example, clean and tidy thanks to control lines that run under the deck which also makes the foredeck more secure to move about on. As you’d expect of a boat of this type, the chainplates run to the full width of the boat and when you look up at the three-spreader carbon rig the large squareheaded mainsail says a great deal about the power that this boat can generate while the narrow sheeting angles on her jibs, thanks to the two transverse sheet tracks, illustrate her pointing ability. 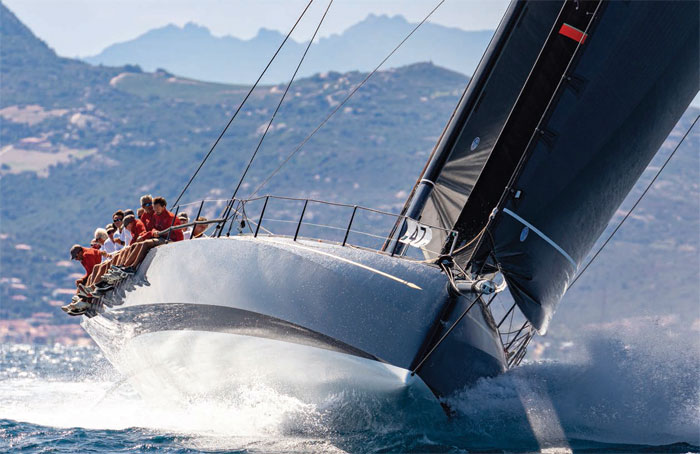 Beyond this, the foredeck is completely clear apart from the foredeck hatch that doubles as a gennaker chute complete with a sock that runs all the way to the back of the boat.

‘Clearly having a long bowsprit is an efficient way to fly the gennaker and code sails but it also allows the jib to remain as the staysail of the boat in medium and strong breezes,’ continues Kouyoumdjian. ‘Not having to drop the jib helps with the handling of the boat while the retractable bowsprit makes the boat easier to manoeuvre during pre-starts and at close quarters, reducing windage as well as keeping the weight back upwind meaning reduced pitching in waves’.

Dual purpose boat
What isn’t so apparent when looking at the deck is that this is a boat that has also been designed with fast cruising in mind. Perhaps not quite the style of cruising where the spray dodger goes up and a tender gets slung beneath davits, but the kind of casual coastal sprint where the focus is shorthanded fast, exhilarating sailing purely for the fun of it. Within just a few weeks of taking delivery of his ClubSwan 80, the owner of My Song had already done just that.

Below: The silhouette and styling of the Juan Kouyoumdjian-designed ClubSwan 80 bear more than a slight resemblance to its smaller sister, the ClubSwan 36 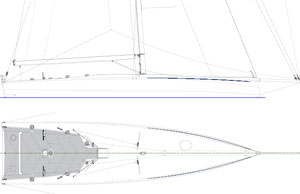 There has been a great deal of effort put into the cruising aspect of the boat, especially below decks where the Milanese studio Nauta Design have created an impressive looking interior using a variety of modules that can be slotted into place.

‘The brief was that this boat has to be transformed from a pure racer to cruising mode in a couple of days by just two people,’ says Martino Majno of Nauta Design. ‘So there's a module that goes in the galley that is on top of the canting keel box and there are two modules which form the bed in the master cabin. It is a queen-sized bed that can be split in two and can be remounted on the sides of the boat to become two single beds so the configuration is quite versatile.’

But for all her many attributes in either racing or cruising mode, the success of the ClubSwan 80 looks likely to rely on whether she can convince potential owners that the benefits that this one-design, owner-driver package claims to offer can be delivered in a boat that performs in handicap racing as well. In that respect, the first signs at the Maxi Yacht Rolex Cup in Sardinia were extremely encouraging.

From a third place in her first race in an intensely competitive fleet to a win on the final day, the message was clear: the ClubSwan 80 may have been a bold and ambitious project that was faced with many additional challenges, but it is one that has been delivered by a company that has a habit of making good on its promises.