This will be good 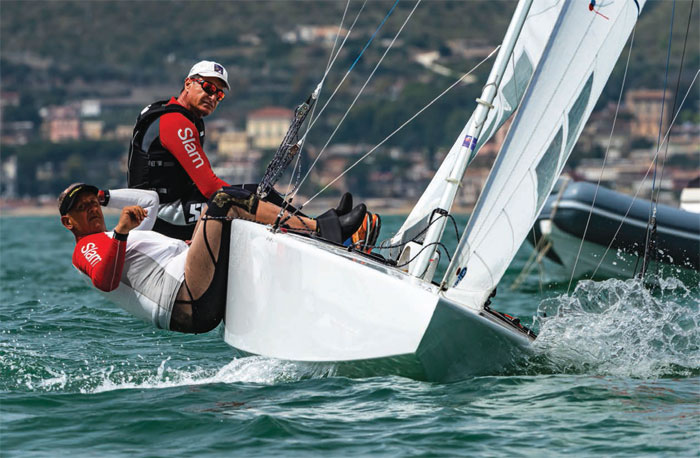 To succeed in the clothing world means accepting that the environment will be fiercely competitive. The pace of change at the high-performance end of the sport has triggered a new wave of technical clothing which has seen the competition increase even further. Which is one reason why SLAM’s new CEO Enrico Chieffi is not only well-suited to the job, but is fired up about the task ahead.

Many will know Chieffi as the highly accomplished Italian Olympic sailor, a multiple world champion, America’s Cup tactician and lifelong devotee to sailing. Others know him for his pivotal role at Nautor’s Swan as vice president where he spent well over two decades shaping a new future for the shipyard, most notably in the performance world. Chieffi likes nothing more than a big challenge and fierce competition, which makes him perfect for SLAM.

Appointed as CEO in the late summer last year, the last 12 months have been full-on for Chieffi and his team as they took a fundamental look at every aspect of the company’s business from its product lines to the way in which clothing was designed, built and supplied.

‘Being a competitive sailor, you learn to judge the immediate issues but also to look well ahead for opportunities. Being successful also means being prepared to make big changes. This kind of thinking comes naturally to racing sailors and are aspects that are important in any business,’ he says.

Applying that foresight and making the bold changes resulted in SLAM launching a new a significantly different catalogue in Milan in May this year at an event that surprised even Chieffi. ‘We were expecting 120 people to attend but we actually had 260 from all over Europe,’ he says. ‘This was an impressive indication of the interest that we had created in a short space of time.’

Knowing how much had changed perhaps he shouldn’t have been surprised. ‘When I joined, the company had over 600 different items and garments or SKUs [Stock Keeping Units] as they are known in manufacturing. And that was before colours and sizes were taken into account. So, we started by taking a blank sheet of paper and going right back to basics to establish what our objectives were and how we would develop a strategy to match.

Main picture and below: just as competitive on the water as he is in business, Enrico Chieffi is the current European champion in the Star class as well as a past world champion in both the Star and the 470. He also created the ClubSwan division of Nautor and played a major role in two AC campaigns 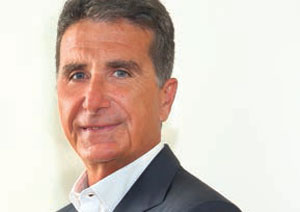 ‘We knew we wanted to be a technical company and to produce high-quality clothing for sailors. This led us to take a close look at the collection and assess each item on the basis of why it was required and how it would fit with other items in the collection. The result was a reduction from 600 to 125 items.’

‘From this smaller collection we were then able to create a structure of more than a thousand clothing systems and combinations to cover the wide range of activities within the sport and the variety of conditions in which they would be used. In basic terms, combinations such as cold/dry, cold/wet, hot/wet, hot/dry etc.

‘The next stage was to validate our designs and establish credibility with the best sailors in our sport so we decided to sponsor the Italian Sailing Federation. By doing this we have taken our products to the very top of the league from Optimist sailing through to Olympic classes where we can reassert SLAM as being technical clothing that has been designed specifically for sailors.’

But there is more to their strategy than straightforward endorsements.

‘We have created two lines, one is the Custom Collection with clothing that is made specifically for the athletes from Olympic to America’s Cup sailors. We believe this is an important fundamental starting point. Take the example of a wetsuit. If you’re sailing a NACRA 17 or an ILCA, what you need in a wetsuit will be different not least because in the ILCA you are sitting down and in the NACRA you’re trapezing. ‘To help us achieve this we will take the specific measurements of sailors to create the perfect fit. We know that in the real world this is a tiny market, but we believe it is crucially important to create the very best items possible.

‘And then the second is the Pro Line which is a range of technical sailing clothing that is aimed at two key areas, inshore and coastal racing from say J70 racing to the Giraglia Race where you are at sea for one or two nights. In both cases we’re looking at sailors that need to be physically active all the time.

‘The second key area here is the offshore cruising line, garments that are more protective, a bit heavier and suited to bigger offshore boats on longer passages. All of these products are constructed in Italy and Europe, we are not producing them in China. Because we will not be producing big quantities and because they need to be high-quality items we wanted to make sure that there was no compromise whatsoever. It is very important to us that the new collection is seen as being high-quality alongside the Italian style that SLAM is already well-known for.’

That reputation also extends to sizing, which Chieffi freely accepts has sometimes been out of step with that of other countries. ‘Sizing has been a very important part of the restructuring of our catalogue,’ he says. ‘We have completely changed the proportions between trousers and jackets which often saw one person wearing two different sizes. But the biggest change is that we’ve moved the scale by about two sizes, more towards American sizing.’

Like some of their competitors, the female range of clothing has seen a good deal of work to create better fitting garments rather than scaled versions of items designed around the male frame.

‘There is no question that there is more demand for better clothing for ladies, but it is not solely about fit. We have spent a great deal of time looking at the practical aspects of foul weather gear for instance, with zips in trousers that make them easier and more comfortable to use.’ 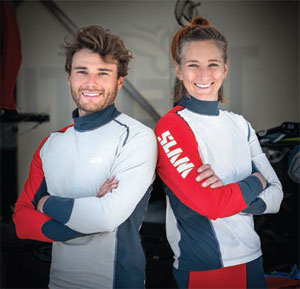 Above: SLAM’s Pro Line, worn by Ruggero Tita and Caterina Banti, the Tokyo 2020 Nacra 17 class Olympic gold medalists, is aimed specifically at inshore and coastal racing sailors.
Below: The Offshore Cruising Line is worn by Nicolò Renna, windsurfing world champion. All SLAM clothing is designed separately for men and women rather than being the same designs scaled up and down. The result is a much better fit 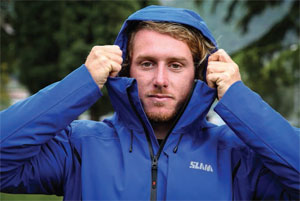 Common to both genders, layers have also been key for the new catalogue. ‘This has been a fundamental part of the re-design. We start with the lightweight, primary layer that is also the layer for high temperatures through to heavier ones for winter along with fleeces. But we have also brought back some items that had disappeared such as the mid layer long johns or salopettes. Here we have taken a number of ideas from mountaineering and off-piste skiing where there is plenty to learn from their highly technical clothing.’

Sustainability is a hot topic for all clothing manufacturers and this is another area that Chieffi and his team have looked into closely. ‘We believe that some of the biggest potential gains in this area come from reducing pollution and improving efficiency,’ he says. ‘Our work in this area started with the big reduction in the SKUs. This was a key starting point. Maintaining a collection and not changing every six months also helps in this area. We are also trying to produce as much in Europe as we can which offers additional gains when it comes to reducing the carbon footprint associated with transportation.

‘But we are also working hard on using recyclable materials and use them wherever we can. Plus, we have taken a very close look at the chemicals and treatments that may come out of a garment when you wash them which is also part of a study into a sustainable and certified production process.’

It is clear that creating a new catalogue from the bottom up has been an intense and detailed process in a market that is already highly competitive, yet Chieffi also knows full well that setting their sights on achieving a reputation for the best quality requires potential customer to see and feel the new products. At a time when many of SLAM’s competitors are reducing their physical presence, Chieffi believes in a different approach.

‘This is another area that we have looked at carefully because it is so closely tied in with our new approach,’ he says. ‘We believe it is very important to have physical presence and we want our stores and distributors to be experts in this field so we have shrunk the number of partners while raising the level of the partnership with each of them. This means we can give them more territory which not only serves the customers better with real expertise, but also helps to build a long-term relationship with SLAM.’