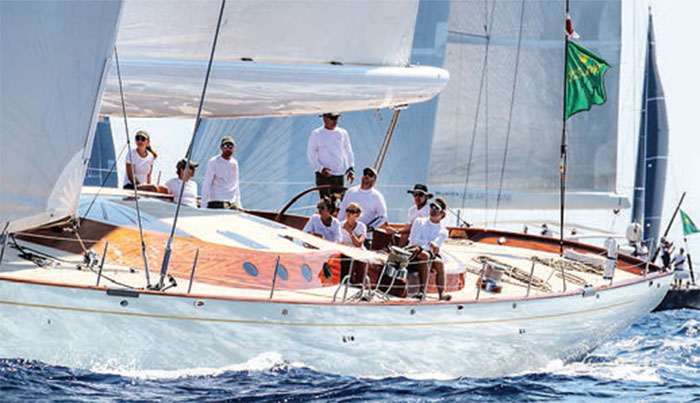 Almost as if a cork had been removed from a very expensive bottle of champagne – or perhaps prosecco – the Maxi world burst back into life with the first really large inshore event for nearly two years. What better event than what has always been effectively the world championship of Maxi sailing, the Maxi Yacht Rolex Cup.

Earlier in the year we, as co-organisers with the Yacht Club Costa Smeralda, were expecting a lowish turnout for this event, in view of the ongoing Covid pandemic. There was apprehension verging on trepidation after the last-minute cancellation of the 2020 edition. Much careful preparation had been done covering all the potential restrictions, including national and local public health rules. The atmosphere in the days leading up to the event was electric. Many crews had come early for training having been so long away from the action; plus there were the new crew made necessary with travel from the isolated Antipodes having been made almost impossible.

With 44 boats the Maxi class was suddenly the largest we have ever had, having absorbed the larger Wallys who for the first time did not have the numbers for a separate class. This caused some anxiety before the event where some believed there could never be fair racing within the larger group. Initially we too were worried how it would turn out but were very keen to try it.

Special provision was made for a very generous-length startline to keep things safe, while from the spectators’ angle, for the media and sponsors, the larger starts are unquestionably more attractive.

The unusual aspect of the week was the generally light conditions… interspersed with very ‘un-Porto Cervo’ thunderstorms and heavy rain. Only Mini Maxi race class 1 had a day of windward-leewards, all other classes racing coastal courses around the beautiful Maddalena Archipelago. With no long reaches and light winds the famous offshorereaching machines Comanche and Rambler 88 were never able to stretch their legs, helping the two Wallycentos Magic Carpet and Galateia to easily beat them on corrected time… as could Highland Fling who but for a broken forestay on the last race would have easily won the series; sadly a truly Herculean effort to replace the forestay (involving the owner’s private jet to collect the parts and then all-night assembly) all came to nought as on the last day the wind never developed sufficient strength for racing. In the end Magic Carpet won the week with the now almost vintage Y3K closely following.

Main picture: The magnificent modern classic Geist, designed and built by Spirit Yachts, may not have lit up the racecourse in Porto Cervo – but she was one of the stars of the dockside. This beautiful creation is notable for, among other things, a contemporary wood interior entirely made up of curves with no straight lines seen anywhere

The superyacht division was dominated by the two J-class yachts Velsheda and Topaz enjoying a week of match racing with Velsheda coming out ahead… despite nearly always being behind at the start!

The Mini Maxis in the high-performance category were almost all former Maxi72s. It is a tragedy for these boats to no longer wish to remain within a box rule and therefore no longer a separate class. It also means that the other smaller boats in their class have little chance against such maximally optimised craft – but these boats on the cusp of the division of classes would also upset the balance of the class below were they moved down.

It was a closely fought battle to the end with Italian Cannonball, former Maxi72 world champion, finally holding onto the win and a further Rolex timepiece for her owner. In a further anomaly of the system the vintage racer Capricorno ended up in the Mini Maxi 2 sub-class… and then won it. As winner of the Mini Maxis overall she was also awarded a new trophy in honour of the late Paolo Massarini, a much missed member of the IMA technical office.

The IMA AGM is always held during this regatta and somehow the same issues appear year after year as contentious. First is our owner-driver rule which on the face of it appears simple and sensible and is very popular with most of the owners. Over time there have been modifications such that other amateur helms can substitute as long as a 2% elapsed time penalty is accepted. The regular boat captain can also step on with a 1% penalty.

World Sailing classification is used to define amateur status but added to this are restrictions applying to Olympic, America’s Cup and Volvo Race helms. Every year the rule is challenged but IMA members guard it fiercely. Our latest change was to increase the periods of rest/relief allowed off the helm for those over either 70 or 75, the choice to be made according to the regatta. We do not apply the rule to the over-100ft superyacht division.

The next argument, which seemed to have gone away until this year, was the perennial battle for dominance between IRC and ORC.

The IMA and the Wally class adopted IRC over 10 years ago and this greatly reduced on-the-dock complaints about ratings. More recently ORC have taken on a more aggressive stance, attempting to convert Maxis to ORC… This year that included turning up at the event with no prior discussion, offering to rerate all the Mini Maxi division and rescore the regatta under ORC. And then award a trophy!

In the end their trophy was awarded but it was decided using IRC scoring only, as that was the system used by the regatta.

This did not stop the ORC then privately accessing enough data to rescore the regatta and then circulate their ‘results’ to the competitors after the event. Among the Maxi owners this was generally considered counterproductive at best, disruptive, de-stabilising and provocative at worst. ORC also declared their strong wish to become involved in a European Maxi Championships in 2022 – but only if all boats were rerated to ORC…

It seems a pity that an era of relative peaceful co-existence appears to have come to an abrupt and unexpected end; there is now little hope of rapprochement and future collaboration after such aggressive attempts to upset the status quo while Maxi owners were enjoying their first proper racing in nearly two years.

This move by ORC offers little or no benefit for owners, just further increased expense, as they know that they would need to remeasure and re-optimise for a different rating system to the current IRC – which is the de facto norm at virtually every Maxi regatta and major offshore race. Nice words are cheap, but the facts remain that it is impossible to have a completely dual-optimised yacht.

This is just another power game in the sailing world, again of little interest to owners who are mostly happy with what they have got. There will always be a few who feel they may do better under a different system, as has been the case going back 200 years, but for most it is not worth the change. Longterm stability is more important.

Political bickering aside, the IMA has a more important dilemma to solve in that we have ‘the’ World Sailing-authorised right to hold world and continental championships for Maxi yachts. These have been held initially for the whole Mini Maxi fleet and most recently for the Maxi72s. But these highly optimised boats had so dominated the Mini Maxi class that no one else wished to race them. If an overall world championship was reintroduced it is likely they would again dominate, so that rather than encouraging greater participation a ‘World Championship’ designation would frighten many away.

With the current formula for the Maxi Yacht Rolex Cup being such a success this would be a pity. The subject is to be discussed further after a questionnaire has been sent to all potential participants, the results of which I will share here once they are available.
Andrew McIrvine, Secretary General IMA