When the best begat the best 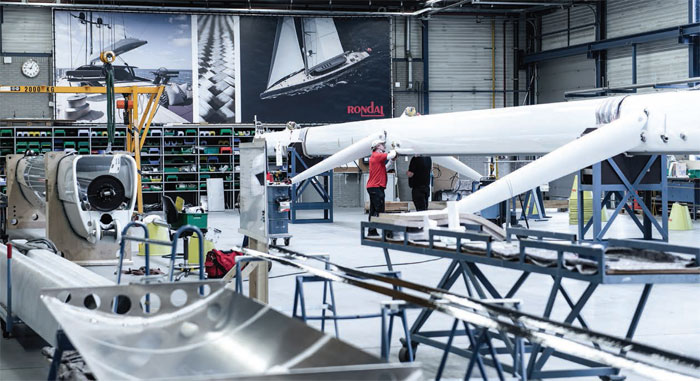 Forty-five years ago Royal Huisman went looking for a new spar building partner, ideally one also able to supply the latest superyacht sail handling and hydraulic systems... In the end they did not have to travel very far

How do you source the rig and sailhandling systems optimised for that paricular superyacht? It boils down to a binary choice between two very different approaches. You can commission it piecemeal from a dozen suppliers or more and then knit it all together as a full custom rigging project. Or, if you want the convenience, performance and reliability of a high-end sophisticated, fully integrated, sail-handling package with the interface to the yacht, you can give the whole job to Rondal.

Until quite recently, most of the top sailing superyacht shipyards made their own masts and built their own winches. Over the last 15 years or so, the speed of innovation has led to leading experts in spar making, rigging, deck hardware, hydraulics and various other specialisms migrating from major shipyards, where they used to work in house, to specialist suppliers that serve the whole industry.

New build projects now tend to involve a whirlwind of design loops with many external suppliers chipping in. It’s a challenge to manage and massively increases the inherent risk of delays, cost overruns and reliability issues caused by incompatible components and various forms of human error. The root of the problem is that no supplier takes full responsibility for the whole sailing system and the integration of all the different bits becomes a major job in itself. But there is an alternative.

Main picture: Rondalʼs huge spar production shed builds carbon fibre masts and booms for many of the largest sailing superyachts in the world. Rondalʼs Out Of Autoclave construction method is unique within the marine industry – Rondal is the only company that can build a 60-metre mast in one single piece

While most of its rivals were shedding their in-house expertise in peripheral fields such as rig and winch production to focus on their core business, the leading Dutch shipyard Royal Huisman made a strategic decision to go a different way. A sister company was formed to design, engineer, manufacture, integrate, project-manage, install and service all-inclusive rigs and sail-handling systems for superyachts. More than 45 years on, and Rondal now has extensive long term experience in supplying all types of hardware. For the last three years, uniquely in the marine industry, they have started to take full responsibility for the entire sail-handling package – everything from the deck up, all the under-deck control systems and the programming logic that drives them, resulting in a more high end and seamlessly integrated system. They don’t make everything in house, but they do make sure it all works seamlessly as a comprehensive, semi-custom package – the Rondal Integrated Sailing System.

Royal Huisman’s shrewd decision back then has created a powerhouse of a business that leads the industry today, working not just for its parent shipyard but with other builders too including Baltic Yachts, Vitters, Perini Navi, and more.

For a typical new build, Rondal is directly involved in design loops from the beginning of the design process, working collaboratively with the naval architect, the shipyard’s in-house team and the client’s chosen sailmaker, all the way through to the end of the engineering phase and beyond. The starting point for rig design is to turn the sailplan and deck plan geometry into a full rig model, factoring in the mechanical properties of all the components involved. This is done in Sailpack/ Aravanti, which is the same fluid structure interaction (FSI) software that’s used by sail designers at most of the world’s leading sail lofts for CFD analysis. After modelling a full spectrum of load cases and optimising the rig package holistically, the results are translated into specifications for spars, rigging and sail-handling systems.

A less obvious advantage of this holistic approach is neatly explained by Rondal’s Bart van der Meer: ‘When a superyacht owner asks his racing team what they need to win more races, they will often say they need more winch power and faster line speeds, so they can be quicker in manoeuvres. But if you consider the sailing system as a whole, you might find that the weight gain of faster, more powerful winch systems reduces the advantage you are likely to get from them. So we are able to guide our clients and help them decide whether to either invest in faster line speeds or better accept being five seconds slower in only the most power-demanding manoeuvres.’

Rondal has its own way of building carbon masts, using the “out of autoclave” (OOA) method, and specially designed air permeability prepregs, for low void composites and low temperature curing resins such as the direction the aerospace industry is going, it’s the only sparmaker in the world capable of producing a 60m-plus superyacht mast effectively in one piece. First, a thin structural mould is made from prepreg carbon to create the shape of the mast. This mould will remain inside the finished mast, making up about 20 per cent of the total laminate thickness and contributing to its strength. Next, the internal patching, compression tubes and conduits are inserted. Then the other 80 per cent of the laminate is applied with continuous seamless and unidirectional fibres running all the way along the full length of the mast, maximising material properties and resulting in a precisely optimised structure with perfect bend characteristics and no joins at all.

By contrast, sparmakers who use autoclaves to cure their masts have to build very large ones in sections and then bolt, or glue them together. The difference in void content between an OOA-manufactured mast and one that’s been autoclaved is negligible – less than one per cent – and the build quality of Rondal masts is equivalent to aerospace technology specification.

Rondal’s furling booms also have a stand-out feature where a hydraulic outhaul cylinder is fitted. This enables it to handle higher loads and gives more precise control of mainsail foot tension. Weight on the end of the boom and its torque load are reduced. A high-performance clutch ensures smooth, safe operation even when reefed.

The company’s other tour de force is its range of deck winches, captive reel winches and powered line feeders, with various electric and hydraulic options in the semi-custom range plus full-custom designs when required. The deck winches are remarkably quiet, need very little maintenance and have earned a great reputation for reliability. The carbon electric captive winches combine massive power with extremely light weight, and they use peak shaving technology to feed power back into the yacht’s batteries, boosting efficiency.

For many of its recent high-profile projects such as the mighty 81-metre schooner Sea Eagle II, the cutting-edge 43-metre DSS foiling sloop Canova, the 56-metre modern-classic ketch Aquarius and the 58-metre sloop Ngoni, Rondal not only supplied the masts, booms, winches, sailing hydraulics and much or all of the deck equipment, but also built their rudders. Sea Eagle II’s rudder is the largest one that’s ever been produced for a yacht. It’s 1,750kg lighter than an equivalent rudder built in stainless steel, with loadsensing capabilities built in by integrating optic fibres into the layers of the carbon composite rudder blade. Ngoni, Aquarius and Sea Eagle II also have custom carbon decks, superstructure and interior components built by Rondal, and for two undisclosed superyacht projects a composite deck and a carbon superstructure were recently built.

Even at the high-performance, race-optimised end of the market, Rondal is increasingly the go-to supplier. One rather exciting project they currently have on the go is the rig and integrated sailing system for a 151ft Reichel/Pugh-Nauta world cruising sloop with race-winning potential, which is in build at the Royal Huisman shipyard at the time of writing and due for delivery in 2022.

The experienced owners of Project 405, as the yacht is currently known, are serious about winning superyacht regattas and have already engaged a professional racing team headed by Bouwe Bekking, who is personally involved with the design and build of the yacht. The design brief calls for the lightest and stiffest possible hull but interestingly, rather than going full carbon composite the hull will be a carefully optimised hybrid. 'The hull construction of this superyacht is an optimal mix of aluminum and carbon composite, and will be ”‘featherlight" – far lighter than the existing aluminium fleet,’ Bekking says. ‘Our result will be formidable competition to existing carbon composite superyachts during regattas.’