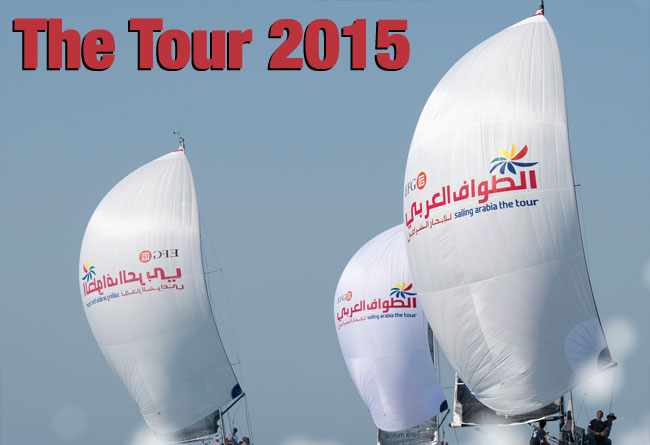 After four successful years, EFG Sailing Arabia – The Tour, has matured into an event that offers golden opportunities for teams looking for a unique challenge, maximum brand exposure and big returns during the European winter season, writes Sue Pelling.

Teams looking for winter training and a unique and challenging event that promises maximum exposure in a friendly, receptive and affluent environment, could do worse than sign up for the fifth edition of EFG Sailing Arabia – The Tour (SATT) scheduled for 15-28 February 2015.

With high level sailors including the likes of leading French sailors/SATT 2014 winners, Sidney Gavignet, Damien Iehl and Cedric Pouligny, plus Bertrand Pacé, and Britain’s Dee Caffari rating SATT as one of the best events of its type on the circuit, it is not surprising this annual event is fast gaining a reputation as the ultimate test of all round sailing skill.

On similar lines to the Tour de France à la Voile, this event naturally appeals to commercially driven teams seeking maximum brand exposure and big returns. However, the focus is also on club/corporate teams, or teams from the armed forces that may wish to not only exploit their sailing talent on the international circuit, but also to use SATT as a team building exercise, and as a platform in which to help build international relations.

Since its inception in 2011, EFG Sailing Arabia – The Tour (SATT) has grown in popularity and prestige both locally and internationally and has become a media success story. In its first year, the event yielded US$3.8m of PR media return, in the following years that value doubled to more than US$9m and in 2014 it achieved more than US$13.5m of coverage.

At the fourth edition of the event in February 2014, a highly competitive mixed fleet of professionals, students and local teams, including an all-girls team led by American Katie Pettibone (former America’s Cup and VOR sailor), and the Royal Navy of Oman, enjoyed two weeks of intense one-design racing. The seven-leg, 760-mile course from Bahrain to Muscat (Oman) via the Arabian Peninsula gave teams the opportunity to enjoy close, tactical racing in some of the best summer sailing conditions imaginable.

With EFG’s continued support, the 2015 edition of this Oman Sail-organised event is expected to be even better with new race course and format designed to improve the overall experience and offer locals, amateurs and professionals from Europe, North America and beyond a chance to experience the Middle East as a prime international sailing location. The timing in February provides those in the northern hemisphere a perfect opportunity to escape winter and enjoy top-class racing in sparkling sunshine and crystal clear waters.

Dee Caffari plans to compete again in the future once she fulfils her commitments with the Volvo Ocean Race 2014/15. Commenting on the benefits of taking part in the event, Caffari said: “The exposure for commercial partners involved in the EFG Sailing Arabia – The Tour is second to none. Also for those looking for winter training in an interesting location in the depths of a European winter, this event is ideal. The warmth of the sunshine, the brilliant blue waters, and the intense pace of the event with the mix of offshore and in-port races, in identical boats where only seconds separate first and last, is a fantastic way to improve sailing skill and teamwork.”

With arrangements for the 2015 event well underway, interest is gaining momentum with seven teams already confirmed. The plan is to run a four-day practice and warm-up session at Oman’s luxury oceanfront development – The Wave, Muscat – before the fleet embarks on a two-week, 676-nautical mile race west bound towards Saudi Arabia.

The first 105-nautical mile leg is to Sohar (Oman), followed by the longest leg (172 nautical miles) round the spectacular Musandam Peninsula to Ras Al Khaimah (UAE). Leg 3 is to Dubai (UAE), followed by Abu Dhabi (UAE), Doha (Qatar), and Al Khobar (Saudi Arabia) where the event will conclude with a final in-port race and closing ceremony.

The Farr 30, the choice of boat for this fast-paced event that combines in-port competition with multi-stage long-distance offshore endurance races couldn’t be better because it delivers on speed, performance and versatility.

The huge course area, which spans over four countries, provides a variety of sailing conditions, with backdrops ranging from remote desserts, to the huge high-rise metropolises of Dubai and Abu Dhabi. While most of the areas around the coast are charted some areas have limited data, which makes navigation and tactical skills paramount. Navigating through an oil field at night and passing from the Arabian Gulf to the Gulf of Oman through the Strait of Hormuz, round the Musandam Peninsula where mountains rise up 2,000 metres above sea level are just some of the course highlights which make this event so unique, exciting and unforgettable. 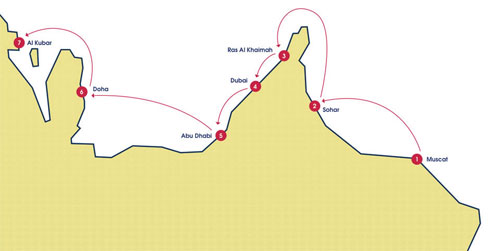 The seven stopover venues are carefully chosen to ensure competitors experience a real taste of the rich cultural traditions and sumptuous hospitality of the Middle East. Formula 1-style prizegiving ceremonies and special VIP events after each stage of the Tour – often in the presence of Royalty – provide plenty of opportunity for the local community to showcase its heritage.

Given the nature of the Tour, which involves sailing from one side of the Arabian Peninsula to the other, the logistics of transferring kit, and the associated paperwork involved are potentially complex. Thankfully, Oman Sail the organisers are able to offer support and it does pay off to be well prepared.

Among those hoping to take part again in 2015 are Team Messe Frankfurt – the young student team from Plymouth – headed by Marcel Herrera who finished second overall to Sidney Gavignet and team on EFG Bank (Monaco), and Team Delft Challenge – TU Delft led by Kay Heemskerk who took third. Although amateur, these young teams of students demonstrated how it is possible to use the event as a platform not only to improve teamwork, but also to perfect professional skills on and of the water to ensure sponsors gain maximum exposure.

Herrera commenting on the event and how it provides the perfect starting point for teams looking to make the transition into the professional sailing world, said: “This event is ideal for teams looking at making a name for themselves to emerge into the professional yacht racing world. It is a great foundation to find and introduce sponsors to the sport of sailing. Their expectations will be surpassed allowing teams to obtain a gradual commitment from commercial sponsors to support them on other campaigns and races. It is also a great winter racing venue with consistent and Grand Prix level conditions.”

David Graham, Oman Sail CEO believes that SATT has put the Middle East on the map as a prime international yachting location: He concluded: “The vision by Oman Sail to develop the region’s sailing talent and reignite the rich maritime heritage has become a reality. EFG Sailing Arabia - The Tour offers an unrivalled opportunity to showcase the region as an exceptional international race destination with its splendid sailing conditions, and fascinating mix of ancient traditions and modern sophistication.”