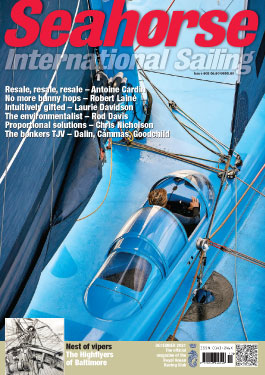 Opportunity knocks?
Getting them onboard and then keeping them there. ROB WEILAND takes an across the board look at the question of access

A nest of vipers
Privateers not pirates. TOM PRICE tips his hat to the ground-breaking Highflyers of Baltimore

Solving the performance and sustainability paradox

Flying higher (than ever)

Update
The New York Yacht Club throws out all its toys, but now appears to want them all back… how being shrewd as much as (fabulously) wealthy can get you into the America’s Cup game and a new Transpac-winning sail configuration. Plus when is a Duckling a Dinky?!? MALCOLM PARKER, TERRY HUTCHINSON, JACK GRIFFIN AND ROBIN BROMLEY-MARTIN

World news
Like the Stones at their peak… Why designers will be up all night (well, the lucky ones) monitoring the myriad new yachts in a bonkers Transat Jacques Vabre. Why no one builds ‘boats’ any more. Why it’s make or break for the Ocean Fiftys. How CHARLIE DALIN was two miles ahead in 10 miles of racing, why FRANCK CAMMAS wishes our other marine friends would stick to the right routes; plus CHRIS NICHOLSON – solid as a rock; and the enormous debt that is owed to the late Luiz Kahl. BLUE ROBINSON, IVOR WILKINS, PATRICE CARPENTIER, DOBBS DAVIS, DICK NEVILLE, SAM GOODCHILD

Straight into it
The Super Series fleet may have felt rusty but it didn’t look that way. ANDI ROBERTSON