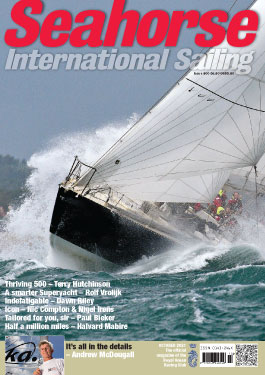 Back in the day
PHIL UHL

Just the nine lives?
Spend long enough on the ocean and eventually you will encounter a rather special NIGEL IRENS-designed catamaran… one that is now well into its 38th ‘season’. NIC COMPTON

The sum of the parts
ANDREW MCDOUGALL gave us the first and since then the majority of competitive production built Moth foilers; now he has a new one. ‘Amac’ has also helped hundreds of more impecunious sailors share the foiling life. BLUE ROBINSON

We’re back!!!
Thanks to incredible perseverance and hard work this winter we are going to have a proper Caribbean racing season. CAROL BAREUTHER

Sailor of the Month
Where did we say that we’d make it easy for you?