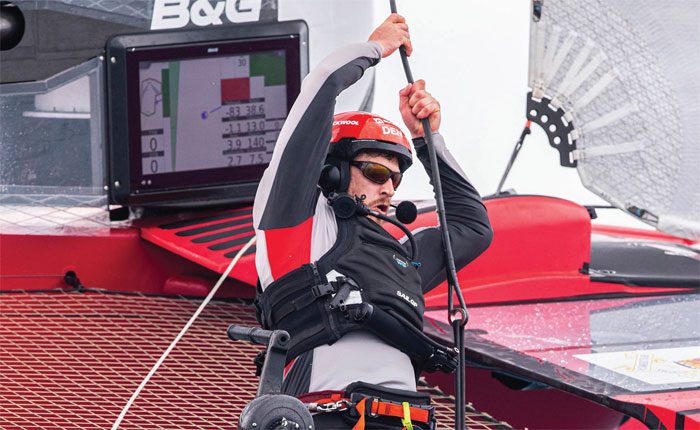 Racing an F50 cat in the SailGP series you will be lucky to get that long...

The ability to judge where the start line is as you approach it at 40kts is not something that troubles most racing sailors. But for SailGP crews the information is crucial. The new B&G Zeus3S Glass Helm displays that are now mounted in the lower sections of each boat’s solid wing sail help the crews to avoid jumping the gun.

The B&G screen technology that that the F50s are now fitted with has seen a big improvement in the display of data that is served up to the crews and it also provides an indication of what might lie in store for more mainstream racing in the future. The 24-inch screens can be configured to display a range of real-time data from performance information such as boatspeed and heading to windspeed and direction as well as more complex functions such as lay lines and speed to burn calculations. This is the crews’ main instrument display aboard the cats.

The fleet has had this arrangement from the off, but the 2021 season saw the boats receive a big upgrade with screens supplied by B&G. ‘The new system that we have supplied is based on our Zeus3S 24-inch Glass Helm displays that you might typically see at a superyacht helm station,’ explains B&G Product Director Matt Eeles.

‘These units use IPS [In Plane Switching] screens which make them ideal for this environment as they are low power, daylight viewable displays that can be seen from a wide range of viewing angles as well as through polarised glasses.’ But these are more than simply displays. ‘They have their own PC processors inside them which means that they can be used to carry out a range of other functions including receiving the course data that is sent out from the race committee,’ Eeles continues. ‘The processors are the new iMX 8 units which means that they can deliver twice the response rate as the previous models which makes them even better at displaying graphics. ‘So, be it charts, lay lines and the wide range of data that you’d expect to see at a modern glass screen helm station, all of it an be represented aboard the F50s if required which makes for a very versatile instrumentation system.’

Main picture: new B&G Zeus 3S Glass Helm displays deliver a big improvement in the display of data that is served up to crews in the SailGP fleet of F50 foiling catamarans. These 24-inch screens can display a wide range of complex functions such as speed to burn calculations and lay lines as well as the usual wind and boatspeed information

As well as providing good information for the crews in the heat of battle, such sophisticated displays also make it much easier for the race organisation, be it the race committee or the umpires and marshals, to communicate with the fleet.

‘All of the course information is transmitted wirelessly to the teams and is displayed on these screens,” Eeles says. ‘It’s a system that has already proved its worth aboard the race management fleet which makes you think about the future for more mainstream regattas where race committees could send out data to the fleet in a similar fashion. Using a wireless connection between a mobile phone and the display, race committees could distribute courses and amendments much more effectively without having to broadcast over VHF.’

Given the connectivity aboard even the simplest and smallest of boats where mobile phones are common, it is certainly food for thought for the future. In addition to the displays, B&G has also supplied the fleet of F50s with a second wind sensor mounted on the top of the wing. ‘Until now the boats have had just one wind sensor mounted under the bowsprit,’ says Eeles. “The trouble is that mounting a wind sensor so low and close to the water’s surface in relation to the height of the wing makes it difficult to get meaningful wind data at times. Now, with a WS700 unit mounted at the top of the wing their wind data is much more accurate.

‘What’s interesting about these units is that originally we were looking into whether we needed to refine the WS series units that have been the backbone of our wind instrumentation system. Having studied the mechanisms in detail we discovered that there was no reason to change the design or construction of the units as their reliability and accuracy remains very high.’

So while most of us won’t be charging into the start line at 40kts in the future and while F50 cats may be a long way from the boats the bulk of the racing world sails, some of the technology within them is heading our way while we continue to share common technology in our anemometers. In that respect at least, the wild 50ft cats are not so different after all.