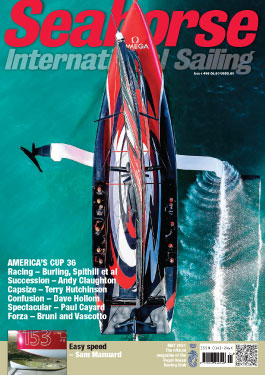 Crunch time
Mediterranean regatta organisers are determined not to be thwarted in their planning for a 100mph restart to a full-on racing season. ROB WEILAND

Old hat
Hoover or vacuum, Highfield or lever? IAIN MCALLISTER explains where some of ‘that stuff’ which today we all take for granted actually came from

Brimmed to overflowing
An absorbing interest indeed. TIM JEFFERY recalls some less known sides to the life of BOB FISHER

Extracting (more) value
We do like to bang on about the many merits of chopping up offshore racers and slotting in new hulls. SAM MANUARD and FRED AUGENDRE have been putting their own thoughts into action

More in the tank
IVOR WILKINS, DAN BERNASCONI, PETE BURLING. Bing bang bosh! It was a wild ride and the Cup has never seen anything like it. The AC75 creators deserve their moment in the sun

Many and varied
We don’t like to brag (really, ed) but our foil-man DAVE HOLLOM did call some of the details of AC75 performance quite well, and we did make him put it into a sealed envelope before the start

Biggest of them all

Designed for the job

Update
AC36 produced closer racing and more match racing than could reasonably be expected with a brand new class, says ANDY CLAUGHTON. But where do we go from here, asks JACK GRIFFIN

Paul Cayard – Welcome surprise
Some of the reasons why AC36 was much better than expected; and how the Kiwis won (again)

IRC – (Today’s) final frontier
Once your yacht has lifted itself out of the water then all bets are off. In every respect. JEAN SANS

SUPERYACHTS
We are excited to be launching a regular new Seahorse section with the remarkable story of a remarkable yacht – the first superyacht from Juan K Design. That should really read their first high performance superyacht… of course. PHILIPPE OULHEN AND JUAN KOUYOUMDJIAN