Biggest in town (actually the world) 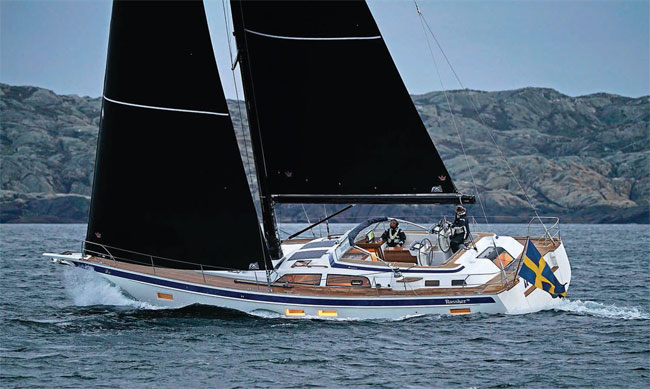 The Selden Mast story began in a small shed – but then again so did Apple and Hewlett Packard. All of them now rather successful mass market suppliers in some of the most technical of technical industries

It’s no coincidence that the world’s biggest mast maker was founded in Gothenburg, Sweden – literally just across the river from Volvo’s vast production headquarters. ‘We’ve taken the automotive ethos into mast building and that’s our biggest technological advantage,’ says Sam Vaughan, Seldén Mast’s head of sales. ‘We’ve always been focused on the mass market, we’ve done plenty of rigs for raceboats but we’re all about multiple builds. Our process is the most repeatable and accurate in the business.’ And that in a nutshell is how a small business founded in a shed in 1960 came to dominate the market for aluminium masts. What’s less well known is that they’re also one of the biggest players in carbon fibre mast manufacturing.

Seldén now has four major factories in addition to its original Swedish HQ. There’s a high-volume operation in western France; one in The Netherlands; one in the United States; and one in Gosport, UK that produces all of the carbon composite spars, all of the dinghy masts, and supplies premium yacht brands such as Swan and Oyster, for whom Seldén recently supplied its biggest in-mast furling spar to date: a 33- metre mast for a new Oyster 745.

One recent innovation by Seldén that highlights a significant change in the way people want to sail is the introduction of carbon in-mast furling masts, as seen on the new Hallberg- Rassy 50. Previously available only from custom spar makers mainly for yachts of 80ft and upwards, Seldén has brought carbon in-mast furling to the mass market and it’s now an option offered by many boatbuilders on their medium-size yachts – not just docile cruisers but cruiser-racers too. A growing number of customers want the weight reduction benefits of a carbon mast but also require the easy handling of in-mast furling, whereas just five years ago most people wanted one or the other – and definitely not both.

Main picture: cruising sailors are now starting to seek the performance advantages of carbon masts but they still require the convenience of in-mast furling. Five years ago, putting an inmast furling gear inside a carbon mast would have been unthinkable. Now itʼs an option that premium cruising yacht builders such as Swan and Hallberg- Rassy (pictured) need to offer

Well over half of the yacht masts made by Seldén are now equipped with in-mast mainsail furling and the company has been the undisputed market leader in these systems for many years. ‘We don’t do in-boom furling,’ Vaughan says. ‘We firmly believe in in-mast furling and have done since day one of the concept.’ More than 30 years of development have gone into the current in-mast furling system, with technology and design features derived from Furlex along the way, and the four key components of the system are still constantly being refined. So, what’s the recipe for success? ‘Lots of bearings, strong parts, stainless steel, good, solid engineering principles,’ Vaughan says. ‘We’re the Volvo of the mast building world. You buy a Volvo because it’s a premium product and you know with complete certainty that it works.’

Reliability is absolutely paramount in yacht rigging and it’s easy to see the appeal, from a boatbuilder’s point of view, of a spar maker with a Volvo-derived ethos. ‘Take Nautor’s Swan as an example,’ Vaughan says. ‘If a customer buys a Swan 48 today, we don’t need to know until well into the build process what section that customer is having, be it conventional aluminium or carbon, in-mast furling carbon or in-mast aluminium. The deck ring is the same so the customer can pick and choose a long way through this process. And it’s exactly the same service we offer to many other boatbuilders of all sizes.’

Like most production boats of a similarly high calibre, the Swan 48 is offered for sale with four different mast options, all with the same section, the same deck ring and the same triangulation of standing rigging. The two carbon options are obviously a lot lighter and also a bit stiffer. ‘With Swan and many other yards, I get an order for pre-build items while the boat’s in build and then later on I get the mast order,’ Vaughan explains. ‘They tick that they want the electric Furlex, the performance running rigging pack, either rod or wire standing rigging, hydraulics or not hydraulics, and it’s all pre-prepared.

‘The person who is installing it or commissioning the boat, literally he’s doing pins and rings, bolts and screws. There’s no “oh, I’ve got to go and get this machined”, or “the bits from these three suppliers don’t fit together”. It’s a complete supply chain solution – one invoice for the whole rig package, one purchase order, one order form. Seldén provides everything from the deck up.’ 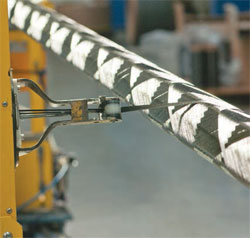 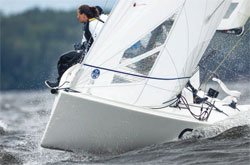 Top: This unique CNC-controlled mandrel filament moulding process gives Seldénʼs spar designers precise control of the tow winding angle and thus the ability to vary the stiffness of different parts of a mast or boom for specific applications.
Above: Seldén has produced more than 1,000 J/70 masts – all absolutely identical.
Below: Seldén now supplies pre-assembled rig packages to most of the worldʼs major boatbuilders and many smaller ones: a complete supply chain solution that includes everything from the deck up. This cuts out a great deal of inefficiency for the builders while delivering reliability and more value for money to the end user 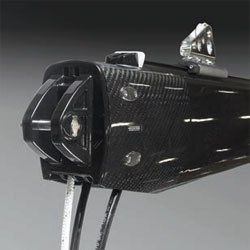 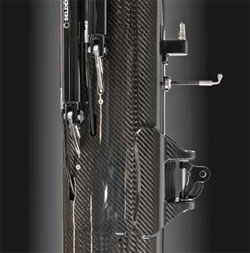 Most boatbuilders have now embraced the automotive way of thinking, he says. ‘You put all the options in packs and you make life simple for yourself. If a customer wants to go full custom and choose everything down to the screw type that the joiner is using to attach the locker hinges, there’s a world for that. But it’s not how it works in semi-production, semi-custom boatbuilding à la Swan, Oyster or Contest.’ The premium builders do offer their customers a wider choice of components than the German and French mass-production brands, but it all boils down to a simple choice between standard or performance packs for standing rigging, running rigging, mast hardware and so on. This approach gives the rig supplier an economy of scale, saves the yacht builder a lot of inefficiency and hassle, and delivers better value for money to the customer. For everyone involved, it just makes sense.

As with its aluminium masts, the strong suits of Seldén’s carbon spars are consistency and reliability, as proven by the huge fleet of J/70s with more than 1,000 of those masts produced in nine years. ‘We only use prepreg carbon and all of our prepregs come from the same supplier,’ Vaughan says. ‘We get the batch numbers and it’s all aerospace grade. We have our own resin system on tow preg to provide improved UV performance and to ensure compatibility with our winding and curing process. We can track back to specific jobs so if a tube were to fail we could go out and check any other spars in that batch. So it’s all about repeatability and equally it’s reducing the element of the human hand. When the machine puts the tow down on the tube, the computer is doing the driving. The machine operator is pressing start and stop, he’s not adjusting or manipulating where the delivery head puts the tow down. It’s all about what the designer has decided with the customer in mind further back in the process.’

This high level of consistency is ideal for strict one-design classes, which is why Seldén is producing spars for four of the Olympic twohanded offshore contenders. The rig package for the Farr X2 was projectmanaged by Seldén’s Andreas Axelsson, a pro sailor formerly with the Artemis America’s Cup team. ‘The X2’s mast is totally customised for the boat,’ he says. ‘Our CNC-based winding of the T800 intermediate modulus carbon filament ensures 100 per cent repeatability and all masts will be identical.’ Vaughan adds: ‘We did a lot of work with our designers and Farr Yacht Design to optimise the tube. We ended up building them a new mandrel.’

The manufacturing process used for Seldén’s composite tubes, mandrel filament moulding, has a number of advantages. It’s much less messy than wet filament winding, where the tow goes through a bath of resin as it’s wound onto the mandrel, and it gives much more precise control over the amount of resin that goes onto the tube. Some spar makers wind carbon sheets onto male mandrels instead of using tow, but Vaughan says Seldén’s process allows a lot more scope for changing the angle of wind. ‘We can go from 0° to 90° in quarter degree increments with the computer to adjust the stiffness along the length of the mast,’ he says. ‘So, if you want a really stiff top mast to support a Code Zero we can start at the bottom with a shallow wind angle for torsional stiffness and then change to a tight angle at the top for longitudinal strength.’ After winding, the tubes are autoclave-cured at 140°C for 8 hours at 4 bar.

Seldén is quite open about some of its technical innovations but the unique paint system that adheres reliably to anodised aluminium is a closely guarded secret. ‘No other spar maker can do that,’ Vaughan says. ‘Only about three people in the company know the product formulation to make the process work, and it’s a stand-out. The paint might get scratched but it never, ever falls off our spars. And that’s another reason why we’re Oyster’s spar maker of choice.’