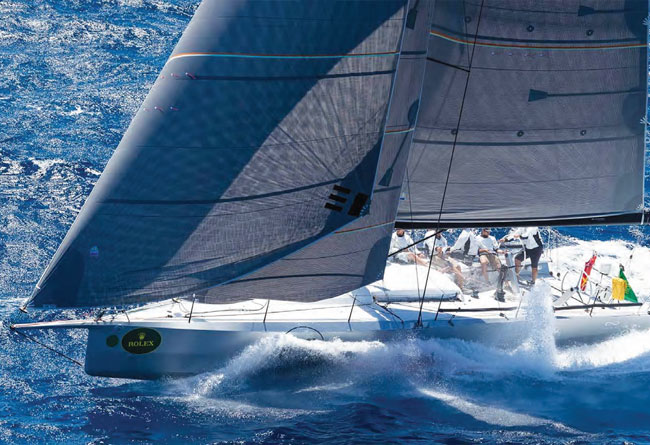 As foils become more powerful and generate more righting moment, rig loads increase – and so do the benefits of Doyle’s sail technology

With three round the world races and dozens of long ocean races on his CV, Doyle Sails’ chief designer Richard Bouzaid has come to regard prolonged periods at sea on high performance race yachts as an occupational necessity, more duty than delight. In that professional capacity, over the course of a decade-long association with British solo ace Alex Thomson, he has added thousands more sea miles to his sailing log, testing and refining sails for Alex Thomson Racing campaigns. As offshore environments go, it doesn’t get much tougher than that.

With the start of the Vendée Globe scheduled for November, Bouzaid says the new generation Imoca 60 foilers are flying faster than ever.

The 2016-17 edition saw a big jump in performance with six entries, all designed by VPLP-Verdier, opting to use foils, four of which took the top four places. Hugo Boss broke three speed records and finished a close 2nd behind Banque Populaire VIII (Armel le Cléac´h), which set a new course record.

In the lead-up to that race and long before a commitment to foiling, Bouzaid joined an investigation by the Alex Thomson Racing team into the concept. The 2013 America’s Cup had demonstrated the huge potential of foiling catamarans but the application on monohulls, particularly for round the world solo racing, remained uncertain.

‘We went off sailing on various different types of foiling boats in Europe, up in Switzerland and Denmark in particular,’ Bouzaid recalled. ‘That was before we really started thinking about the sails, or even the style of boat for the Vendée programme, or we knew how fast these boats would be.’

The 2016-17 fleet introduced a foiling revolution, with a performance jump of more than 40 per cent at times over the previous generation. Bouzaid says the 10 boats with the new larger foils in the 30-boat fleet for 2020 show a similar performance leap, in certain conditions 40 per cent faster than the 2016 generation.

For the sailmakers, a limit of eight sails including a mandatory storm jib means a relatively small inventory has to cover all eventualities. With the mast positioned well aft, the sailplan is configured around a mainsail and a permanent J2-type headsail on a fractional forestay set about two metres back from the stem.

Ahead of this primary headsail are three tack positions along the prod, offering options for fractional or masthead Code Zero and reaching and running sails, varying in area from 200m2 to 400m2. Inside of the primary headsail, provision is made for a staysail. The reduction in sail numbers is mainly cost-related but the speed of these boats also reduces the number of sails required, much like a multihull.

The all-Doyle Hugo Boss inventory is heavily invested in the company’s Structured Luff technology on all the flying sails including the staysails. “They are all lensed sails with luffs projecting forward,’ Bouzaid says. ’They are so effective on Imocas, which have high righting moment and low rig tension (about seven tons on the primary headstay). Anything you can do to reduce headstay sag and make the sails work more efficiently under relatively low loads is always going to be a big gain.’

Even with the larger foils on the 2020 generation yachts producing more righting moment (and thus more rig loading) the safety margins are improved with Structured Luff technology over conventional sails.

The weight reduction achieved by Doyle Sails technology brings additional advantages. ‘Weight saving remains very important, more so than ever with foiling. If you can be 500kg lighter overall, there are gains to be had in foiling earlier. And, any weight you can save high up quickly adds to the advantage.’

One big change is in the construction method of the sails. ‘The sails come off the Stratis floor 50 per cent more finished than they were three years ago,’ Bouzaid says. ‘Virtually everything that was once stitched on afterwards by sailmakers on sewing machines is now built into the laminate. All the batten reinforcements, corner patching, hand patches, luff attachments and so on are now precisely laminated in place.

‘That not only makes them more durable, which is particularly important in a race like the Vendée Globe, it also gives a much smoother surface finish. With the high speeds these boats achieve, the sails take a battering from the force of water and wind trying the rip them apart.

High speeds mean the apparent wind is nearly always well forward of 60° and when true windspeed approaches 20kts, sail reduction comes into play. ‘Those decisions about how far up the range to carry big sails will vary from skipper to skipper,’ says Bouzaid. ‘In the last race, we saw footage of Hugo Boss in the Southern Ocean with reefed main, a jib and a staysail ripping along at maximum heel. In similar conditions, some boats were down to two reefs and a tiny jib.

‘Generally, with singlehanders, the significant sail changes are made in the lower wind ranges, up to about 20kts. It takes a long time to change a sail on your own. A lot of thought and planning goes into it and you can lose a lot of time, particularly if it goes wrong, which it can easily do.

‘The biggest issue is getting caught with too much sail up, so in winds above 20kts the rule of thumb is to get down to small sails reasonably early. Because the boats are fast and generating a lot of apparent windspeed, a few sails on these boats see a huge amount of time while other more conventional sails do not see much time at all.’

Sail design decisions need to take account of hull and foil shapes, so the package is tailored closely to the individual boat and skipper. ‘It is definitely not plug and play. You could not just take a set of Hugo Boss sails and put them on another boat. They would fit, because the rigs are one-design, but they would not necessarily work well because they were not designed for that particular setup or how that skipper wants to sail the boat.’

Below: Alex Thomson’s latest Hugo Boss has an all-Doyle Stratis sail wardrobe with Structured Luff technology on all the flying sails, including staysails. The forward projecting luffs of these sails are especially well suited to Imoca 60s, which have high righting moments but low rig tension. Headsail design is crucial on a boat so fast that the apparent wind is nearly always forward of 60°. The hull and foil shapes of individual Imocas have a direct bearing on sail design decisions. So does the autopilot and the skipper’s style of sailing 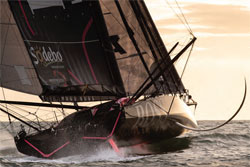 Sail shapes and depths also need to take account of how autopilots handle the conditions. With the apparent wind forward, the tendency might be towards flat sails but they require more accurate steering. ‘With flat sails, the problem is that if the apparent wind moves aft and the autopilot doesn’t correct quickly enough, the boat will slow down very quickly and take a while to recover. Deeper sails are a bit more forgiving. It is a balancing act to find what maintains the highest average speed.

‘It is not like a Volvo 70, say, with a driver and a full crew trimming constantly for every little change. You don’t have that luxury.’

Bouzaid’s involvement with Thomson’s singlehanded campaigns has given him enormous respect for the Imoca boats and the skippers who drive them hard around the world. The punishment they and their machines endure is something that Bouzaid has observed firsthand through thousands of miles of ocean testing.

‘I have done several Atlantic crossings with him, done passages from Auckland to Portugal and we have notched up countless miles in the English Channel,’ he says. ‘Alex knows I don’t particularly like going offshore anymore so he doesn’t tell me the plan. I arrive in England and we generally leave to go sailing the next day.

‘Only once we are at sea does he tell me we are going to be away for two or three weeks. He gets great enjoyment out of that,’ Bouzaid laughs, before confessing that, despite the discomfort, he greatly values the association and the experience. He even uses the term “phenomenal fun” at one point in the conversation.

These passages typically have four or five people on board and involve testing all day and then usually slowing down overnight. Even with this rare switch to “cruise” mode, it is not exactly an occasion for relaxing. Life aboard an Imoca is relentlessly tough. ‘These boats are incredibly noisy and the motion is extremely harsh and jerky, both from the slamming and from the autopilot making constant high-speed course corrections,’ says Bouzaid.

‘It is hard enough just standing up, let alone moving about and getting things done. As each generation has evolved, it gets more brutal as the boats go faster and spend half their time out of the water.’

In racing mode, the idea of one person alone coping with 70 to 90 days of this onslaught non-stop is hard to comprehend. The endless battle against fatigue and sleep deprivation; the fine line between speed and risk; manhandling sails weighing up to 80kg either to make changes on deck, or re-stacking them below to make trim changes, surely make this one of the most extreme mental and physical endurance challenges on earth.

‘I take my hat off to them,’ Bouzaid acknowledges. ‘I really don’t know what drives them to do it. You can’t race these boats for any period of time and not do some damage. It is almost 50-50 whether you are going to finish for one reason or another.’

Alex Thomson knows the pain of not finishing. His first two Vendée Globe attempts ended that way. The last two, however, ended on the podium with a 3rd and a 2nd respectively. Momentum in sport is greatly prized and the trend is decidedly positive as he embarks on his fifth bid to seize this daunting title.