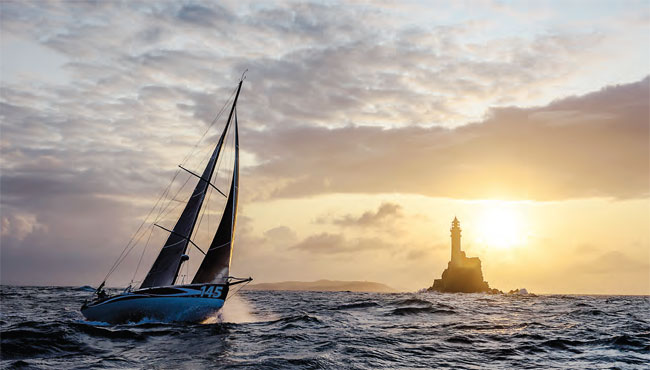 Tactical, demanding, rewarding, every offshore sailor who gets even half a chance needs a Rolex Fastnet Race on their CV. Few regret it, particularly once they have had time to dry out…

Much gin may have been spilled last December when the Royal Ocean Racing Club announced that the finish of its flagship event, the Rolex Fastnet Race, was moving from Plymouth, its home for the last 95 years, across the Channel to Cherbourg. However, the best part of a year on, even the staunchest traditionalists are warming to the new finish venue and its benefits, such as actually being able to get a free berth alongside until the prizegiving, the potential for fine dining and the public interest that only yacht races taking in la Belle France seem able to create, especially when the fleet gets to moor in the heart of one of the country’s most historic ports.

France is the world’s top offshore racing nation. It is home to Rolex Fastnet Race competitors in the Ultim, Imoca 60 and Class40 grand prix offshore fleets, among them some of the world’s fastest offshore multihulls and monohulls, many of whose skippers are household names and whose sponsors – including some of France’s biggest companies – will gain value from the move to Cherbourg.

Meanwhile, for competitors in the main IRC fleet, from serious grand prix entries to enthusiastic amateurs, sailing schools and family entries, not only do they get to take part in an event in which they can rub shoulders with the international offshore racing elite, and can have a chance of winning the race overall if they sail well enough, but now at last they can be part of a finish worthy of the world’s largest participation offshore yacht race.

In Cherbourg the fleet will be moored in the giant Port Chantereyne and in the Bassin du Commerce in the heart of the city centre. Berthing in Cherbourg is also available to competitors for free during the week before the start of the Fastnet Race, where it will be possible for crews to complete their registration formalities.

There is the prospect too of a mass departure from Cherbourg bound for Cowes on the Saturday night. At the finish competitors will be able to enjoy a big race village with top-quality live entertainment and the local organising team anticipating a footfall of around 150,000 over the duration of the finish period. All this has been made possible thanks to the City of Cherbourg-en-Cotentin, the Communauté d’agglomération du Cotentin, the Conseil départemental de la Manche and Région Normandie, working alongside the RORC.

From a tactical point of view, the move to Cherbourg adds around 90 miles to the course and presents a different challenge.

While the tidal conditions at the Lizard and fickle wind on the approach to the Plymouth finish line could see places change, so too the approach to Cherbourg from the west has similar challenges which could affect the outcome of the race and provide opportunities for those still in with a chance of winning their class and the race overall.

Entry
Over the past two decades the Rolex Fastnet Race has proved itself hugely popular, as demonstrated by its enormous and growing fleet that last year saw a record 388 yachts on the startline from 27 nations. Equally extraordinary is that, when registration for the race opens in January, all available places are snapped up literally within minutes before a waiting list is inevitably opened (the record time being just four minutes, 24 seconds).

However, this and the event’s familiarity perhaps underplay the fact that the Fastnet, now slightly longer at close to 700 miles due to the move to Cherbourg, remains a very serious race, usually involving a lengthy, ultra-tactical beat southwest down the Channel followed by open ocean crossings to the Fastnet Rock and back, during which competitors are exposed to the full brunt of the Atlantic Ocean.

The race has gained a reputation for being tough and demanding, not least because in 1979 15 competitors died after a storm hit the fleet in the Celtic Sea. Safety standards and the design and build of yachts have immeasurably improved since but for safety reasons the RORC is obliged to demand stringent qualification.

The all-important registration opens on 12 January 2021 at 1000 UTC, with entries admitted on a first come, first served basis. Signing up takes place online and requires competitors to log in to their RORC Sailgate account. Those yet to register for Sailgate are strongly advised to do so well before the 12th.

By 17 January the race team will have allocated places. RORC members take priority over non-members (to join, visit www.rorc.org/membership/join-the-rorc). A non-refundable 50 per cent of the entry fee must then be paid within 10 days of registration (ie by 22 January).

Qualification
Entrants must also liaise with the race team over their plans to comply with the qualification requirements. For the 2021 Rolex Fastnet Race the main points are:

RORC racing manager Chris Stone says, ‘Crews can benefit from carrying out their qualifying miles within the RORC’s own programme as it provides a chance to size up the competition. Some races, notably the Myth of Malham from the Solent around Eddystone Rock and back, also offer opportunities to test-sail parts of the course plus you can of course practise starting from the Royal Yacht Squadron line and familiarise yourself with the complexities of exiting the Solent.’ 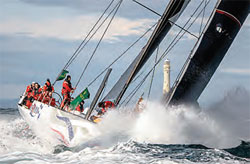 Above: Peter and David Askew’s V070 Wizard heads for home after rounding Fastnet Rock in last year’s race en route to overall victory – a rare occurrence in recent years when French teams on much smaller boats have dominated.
Below: it’s only the first dozen or so miles, but make the wrong choices after the start through the currents and shifts of the Solent and life can start to look a little bleak for that first night of the race to the aggressive and often spectacular tidal gate at Portland. Fortunately the Fastnet is a complex course, much more complex than most of the other 600nm classics. and there are plenty of options ahead of you to make up the lost ground (or not…) Even more in 2021 with the course having been extended to the new finish port of Cherbourg (bottom) with its enormous all weather harbour (and plentiful excellent hostelries – ed). With a race village on a scale not seen before for this offshore classic the French organisers confidently expect a total footfall in excess of 150,000

For entries without access to the RORC’s domestic offshore programme, for example yachts coming from overseas, an alternative method of qualification must be agreed with the RORC race team on a caseby- case basis. Proposals should be lodged as soon as possible after registration.

Apart from the grand prix classes like the Ultim, Imoca 60 and Class40, and multihulls eligible to compete in the Mocra class, yachts will race in the main IRC fleet. Here competition is typically hottest for the respective prizes within the five main IRC divisions. The minimum permissible IRC TCC for entry is 0.850, which roughly equates to a Contessa 32. There is no upper limit, so sailing superyachts and 100+ footers can also apply.

The overall winner of the Rolex Fastnet Race under IRC receives the historic Fastnet Challenge Cup trophy. It is said that each boat races to win its class and the weather will decide who is the overall winner and recent winners have shown this to be true. Many have been French – father and son team Pascal and Alexis Loison, the first two-handed team to win the race overall in 2013 (double-handers remain eligible to win overall), followed by French champion Géry Trentesaux’s Courrier Du Leon and Didier Gaudoux’s Lann Ael 2, with American brothers David and Peter Askew’s VO70 Wizard finally prising the trophy from French hands in 2019… when French crews won every class with past winner Alexis Loisin (this time sailing with Jean-Pierre Kelbert of yacht builder JPK) claiming IRC Three and the IRC Double-Handed class, and Géry Trentesaux (of course) winning IRC Two.

Like the crews, yachts entering the Fastnet Race must be fit for purpose. In terms of equipment they must comply with Category 2 requirements of the World Sailing Offshore Special Regulations (including RORC prescriptions) that prescribe a boat’s stability, equipment and construction standards.

Full details of all of the qualification requirements will be published in the 2021 Rolex Fastnet Notice of Race, but a full blow-by-blow guide on how to enter, including a sample email outlining how a team intends to carry out its qualification mileage, can be found on the event website at: www.rolexfastnetrace.com.

Chris Stone concludes: ‘Above all we are keen to ensure that anyone wishing to enter the 2021 Rolex Fastnet Race will have the opportunity to do so. If anyone has any queries about any aspect of entering or qualification please feel free to contact the RORC race team in Cowes. We are here to help you.’
James Boyd

Click here for more information on the Rolex Fastnet Race »