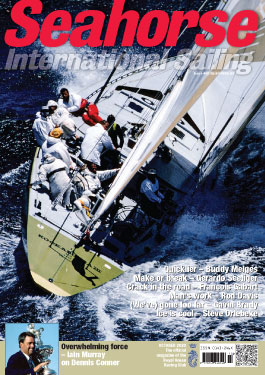 Careful what you wish for
STEVE ORLEBEKE is terribly hooked

Last chance saloon
We are fast approaching the elections for the World Sailing executive which for once really do have big implications for sailing. Or maybe not? GERARDO SEELIGER talks to CARLOS PICH

And then they were free…
The brilliant FRANÇOIS GABART did not pick the best day to open a new facility and receive the main hull of his new Ultim. JOCELYN BLERIOT

Out on a limb
It is a brave man who makes performance calls about any America’s Cup fleet, let alone this one. ‘Nothing ventured,’ says DAVE HOLLOM

Update
Getting closer… at long last, relieved to have made the trip, winning the Cup was just the start of it all, TED TURNER at his finest and the Not-a-Pogo hits its stride (rather quickly). Plus is there really no end to that man’s ingenuity? PAUL BIEKER, JACK GRIFFIN, TERRY HUTCHINSON, GARY JOBSON and LYNN FITZPATRICK

World news
Even the proudest warriors make mistakes, all credit to the Stars&Stripes, French sailing loses one of its finest, the Brits (really) are coming, PHILIPPE POUPON – happy customer, lateral thinking in Auckland. Plus why ever faster and ever higher is not necessarily a good thing. PATRICE CARPENTIER, DOBBS DAVIS, IAIN MURRAY, BLUE ROBINSON, GAVIN BRADY, IVOR WILKINS, BLAIR TUKE

Rod Davis – Man up
It all went rather better than expected

ORC – Let’s hunt
A new custom raceboat for the US circuit is much too rare a beast. But it’s a start. DOBBS DAVIS

Sailor of the Month
More similarities than there are differences