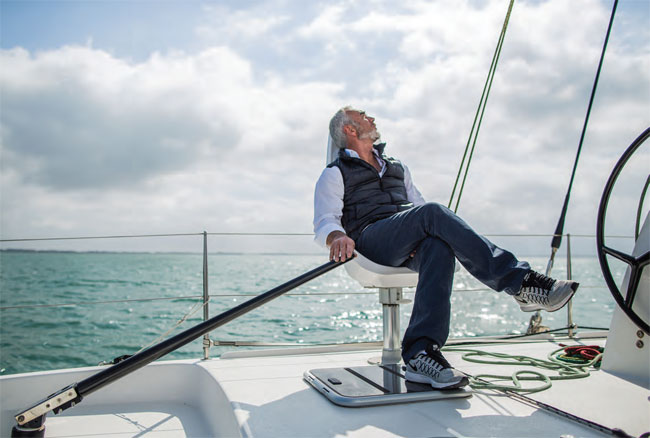 At one end of the scale are the money-no-object speed machines. At the other end are docile cruising cats heavily laden with furniture, equipment and domestic systems. It’s almost a binary choice, but in the middle of the multihull performance spectrum one brand stands alone. Outremer has built a unique reputation as the only major catamaran builder that offers a balanced compromise between these two extremes.

It wasn’t always that way. Most builders started off in the 1980s making cats that were fast, comfortable and fun, aimed at experienced sailors who wanted to cruise long distances and win a few races, too. Then new models from nearly all builders began to get progressively heavier, slower, roomier – and less rewarding to sail.

The main driver for this trend, which continues today, is the yacht charter industry. Multihulls tend to have a lot more living space than monohulls and unless overpowered they’re inherently stable. That makes them ideal as a holiday platform for a wider range of charter clients including novice skippers, families with non-sailing members and couples sharing a boat who want a bit of privacy from one another.

Thus the builders started producing yachts to charter spec: 40-45ft long with at least 6ft of beam in the forecabins to allow full-size double island beds; four big en-suite bathrooms; a foolproof rig; a price tag under €400,000 in today’s money; and a short delivery time. Tax laws also encouraged the charter cat boom, allowing owners to deduct the cost of their boat from their taxable income if the boat was involved in the charter industry.

Main picture: Wheel or tiller – why not both? Multihull grand master Loïck Peyron at the helm of an Outremer 4X, enjoying the perfect ergonomics of the rather clever deck and cockpit plan that he helped to optimise for efficient and enjoyable sailing. Very few cruising cats have the feather-light yet highly engaging helm “feel” that you get from a well-balanced monohull... or an Outremer!

Outremer’s founder Gérard Danson refused to go down that road. ‘I asked him back then why he was not interested in growing his business,’ says Outremer’s Mattheiu Rougevin-Baville. ‘He told me about his experience in the Transmed Race in 1980, with 60-70kts of wind and six to eight-metre waves. So many boats were lost or capsized. He survived on one of his own designs and became convinced of some non-negotiable safety features.’

Danson’s essentials include long, slim hulls, low freeboard, low centre of gravity, central weight distribution and daggerboards. ‘He was well aware that the company would not grow as fast as the others who were aiming for the charter market but said he wanted to sleep at night, without worrying about owners’ safety,’ Rougevin-Baville explains. ‘It took time to grow but we are very proud that you can meet any kind of weather and still be safe on an Outremer.'

Today, Outremer remains true to Danson’s ideas. Even its sporty models, the 48ft 4X and 60ft 5X, are not overpowered. ‘Both have a sail area : displacement (SA:D) ratio of 14m² per ton upwind and 30m² downwind,’ Rougevin-Baville says. ‘We feel it’s the maximum power ratio to keep a cruiser-racer safety margin.’ Above 14m² per ton the yacht will readily fly a hull upwind, which has serious safety implications for ocean sailing.

By contrast, most cruising cats have an SA:D of 7-10m²/ton upwind and 15-20m²/ton downwind. They may have more sail area than an Outremer of similar length, but they’re a lot heavier. ‘The lightest 4X we’ve built weighs 8.5 tons in cruising trim; our lightest 5X is 14.5 tons,’ Rougevin-Baville says. Compare that to 20 or 30 tons for a typical cruising cat. ‘The main difference in performance doesn’t come from extra power, but from reduced drag and better windward ability,’ he says. ‘There are lots of claims about performance but the real one is the ratio between wind force and boatspeed.’

Platform length to overall length is another important ratio. Many cruising cats have a platform nearly as long as their hulls but for Outremer it’s never more than 50 per cent. ‘This is very important to keep the boat light, keep the weight centred and avoid waves slamming underneath the bridgedeck,’ Rougevin-Baville explains. Multihulls are more sensitive to weight distribution than monohulls because they don’t have a ballast keel that puts 35 to 50 per cent of their overall weight in the optimal position to reduce pitching. The shorter the platform, the better the weight distribution and the gentler the boat’s motion in a seaway. ‘The bows should be narrow too and can’t have a wide double bed if you want to dampen the ride and keep the motion smooth,’ he says. ‘The height of the centre of gravity (COG) and weight distribution are crucial on a multihull if you care about sailing with a comfortable motion.’

The 4X and 5X both have a very low vertical COG: just 70-75cm above the waterline, 80cm lower than a typical cruising cat. This is achieved partly by having low freeboard, a carbon bimini and foam-cored decks, topsides and superstructure with heavier solid GRP underwater sections, but also by not adding a flybridge (which also raises the boom) and not mounting the mainsheet on the coachroof or bimini, which then needs heavy reinforcement.

Bridgedeck clearance is also important. Waves slamming the underside of the platform and hulls slow the boat, exacerbate the hobbyhorsing caused by poor weight distribution and a high COG, and can prevent the boat making headway to windward. While most cruising cats have 45-60cm of clearance, Outremers have 85-95cm.

Hull beam is another factor. Charter spec dictates a beam for each hull of 1.85 to 2.4 metres. By contrast, the slender hulls of an Outremer – 1.2m for the 4X and 1.6m for the 5X – create much less drag and aren’t prone to pitching. Buyers have to choose between two different types of comfort. A wider living space inside the hulls means a less comfortable motion.

Daggerboards are a further differentiator. Nearly all other cruising cats have fixed keels. ‘They make a huge difference,’ Rougevin- Baville says. ‘We feel they’re compulsory for safety (getting away from a lee shore in bad weather, for example). A tacking angle of 90° allows you to sail anywhere, faster than most. Fixed keels usually give a tacking angle of 110°-120° and if you add some current, you can’t make headway without engines.’

The upwind performance boost of daggerboards is impressive. ‘The best VMG is usually around 48-53°,’ he says. ‘An Outremer will beat a good racer-cruiser monohull upwind in good conditions, with a target speed upwind of 10kts at 47° TWA in a true wind of 15kts.’ Few other cats can do that. 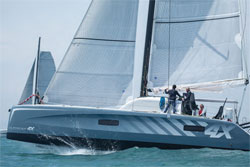 Above and below: owners enjoy close-matched and hard-fought racing in the Outremer Cup organised annually by the shipyard. Above: very careful weight reduction and distribution are key to Outremersʼ performance, seakeeping and comfortable motion. Even the furniture is foam-cored to save weight, which means more speed: transatlantic passage times are typically just 10 to 13 days 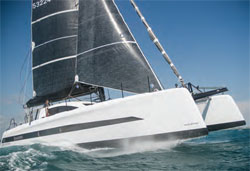 He cites a round-the-world voyage in which two friends – one with an Outremer, the other in a cat with fixed keels – sailed the same route: ‘The Outremer spent less than five per cent of the time close-hauled, for the other cat it was 30 per cent. When you can sail against the wind efficiently you spend less time doing it. And no one enjoys beating into the wind for a long time.’

Aren’t daggerboards a liability? ‘They are designed to be a fuse if you hit something hard and will break,’ he says. The board’s front crashbox will go first, then the rear one, and then the whole thing will shear off. ‘It’s not a big deal, you can use the other one. That’s why we’re not big fans of asymmetric boards.’

Outremer’s construction methods are also different. Most builders assemble a cruising cat in a few weeks by gluing together prefabricated pieces. An Outremer takes seven to nine months to build, laminated entirely by hand as a single solid piece, including berth supports and shelves. Cabinetry is fitted with a soft bond of Sikaflex, not rigidly bonded. The result is a very stiff boat with none of the creaking, squeaking, cracking noises most multihulls make in choppy seas.

Vinylester resin is used as an osmosis barrier and for carbon fibre lamination but regular polyester is used elsewhere. ‘It’s very practical for ease of repair,’ he explains. ‘You won’t be stuck for weeks until a shipyard with a controlled environment can handle your eight or nine-metre wide boat. In the tropics, where 100 per cent humidity is common, it helps being able to laminate a repair with any resin you can find. You can’t do that with a hi-tech composite.’

Buyers can specify how much carbon fibre is used. ‘We have a tool to define the optimum compromise between cost and weight depending on the result the buyer wants to achieve,’ Rougevin-Baville says. ‘You add more carbon to go faster or to compensate for heavy equipment. Of course the price goes up, so our cost/weight tool is useful to decide where to set the limit.’ A hand-built yacht tailored precisely to your own sailing plans does of course cost more than a standard production model but due to a combination of build quality, performance and ocean cruising capability, Outremers hold their value remarkably well and are highly sought-after on the secondhand market.

Despite being built for blue water cruising, with things like washing machines on board, Outremers have performed impressively in passage races: line honours in many editions of the ARC and Transmed, an OSTAR win back in 2000 and first production boat in the 2018 Route du Rhum. And while Outremer has never built a raceoriented boat, that’s about to change. ‘We have several projects under way for the next Route Du Rhum,’ Rougevin-Baville reveals. ‘For the first time they intend to race “for real”, so we should start pushing boundaries soon!’