New in every sense 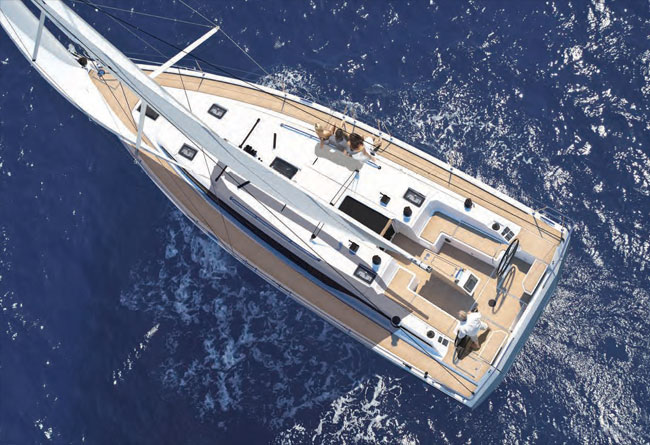 It’s not only the management that’s changed at Bavaria Yachts. Race yacht designers Maurizio Cossutti and Alessandro Ganz are moving the boats steadily towards the speedier end of the performance spectrum

It’s Bavaria Yachts’ big comeback boat in more ways than one. Launched at the recent Düsseldorf Boat Show, the Bavaria C42 is the first new sailing yacht brought to market under the shipyard’s new management, following a change of ownership. Not only that, but it signals a significant shift in Bavaria’s yacht building strategy: a definite and deliberate move away from the rather sedate family cruisers of the previous generation, which were aimed primarily at novice sailors, towards a new and more broadly appealing range of boats. They’ll still be spacious, high-volume cruisers designed for easy handling but the Bavaria C42 makes it clear that the new generation of Bavarias will be more rewarding to sail with bigger, higher aspect sailplans, better ballast ratios, sharper handling under sail and more performance potential.

One thing that hasn’t changed is the design team: Maurizio Cossutti and Alessandro Ganz are best known for their IRC/ORC racers but since 2015 the highly regarded duo have overseen a subtle design evolution at Bavaria Yachts with a gradually increasing emphasis on sailing performance in the three models leading up to the Bavaria C42. ‘The yard’s request was to retain the main design features of the C57, C50 and C45,’ Maurizio Cossutti explains, ‘but at the same time to impart a clear, precise sign of the change in direction and mindset.’

Cossutti Yacht Design has earned a reputation for designing hulls that are elegant as well as easily driven and this one is no exception. At first glance the Bavaria C42 is a goodlooking yacht with an attractive sheerline, an elegant silhouette, some race-derived design features and a sleeker, generally more angular appearance than previous models. That said, the brand’s identity has been carefully preserved and despite the Italian-accented style of the hull shape and deck layout, it’s unmistakably a Bavaria.

Hard chines make berths bigger
Perhaps the most obvious of this yacht’s key features – especially for those who know the brand well – are the prominent hard chines running back from amidships to the aft quarters of the hull, just above the waterline. It’s the first time Bavaria has ever produced a sailing yacht with a chined hull.

Main picture: itʼs a Bavaria yacht but not as we know it... the new Bavaria C42 signals a change in philosophy and mindset at the German shipyard. Key features include a tall mast stepped quite far aft, a rather large self-tacking headsail with a narrow sheeting angle, high volume bow sections, a well thought out cockpit layout and boxy aft quarters that boost form stability and make space for wider berths in the aft cabins

Some yachts’ chines are mainly cosmetic but as Cossutti and Pascal Kuhn, Bavaria’s product manager for the Bavaria C42, are both keen to point out, on this boat they serve several functions. ‘We’ve developed the Bavaria way of doing chines,’ Kuhn says, explaining that they give the hull a significant amount of additional form stability while creating useful extra living space, or stowage space, inside. ‘And it’s the Italian way of doing chines,’ says Alessandro Ganz. ‘We’ve saved a lot of wetted area and of course we care about the aesthetics too.’ The positioning of chines on a cruising yacht’s hull has to be extremely precise, Cossutti explains, much more so than on a racing yacht hull where higher boatspeed allows a greater margin of error. ‘The position is crucial, otherwise negative effects can occur.’

The extra form stability of the chines comes into effect at a heel angle of 15 to 20 degrees and the hull’s waterline length also extends, improving the yacht’s boatspeed when sailing upwind. ‘When designing the underwater hull, you can also use the dynamic effect of the chines for faster water drainage on the hull,’ Cossutti says.

The other big benefit of these boxy aft sections becomes clear when you look into one of the aft cabins: where most yachts have a tapered double berth due to the curvature of the hull, the C42’s aft cabins have straight full-size doubles: 1.6m wide all the way from head to foot.

At the aft end of the hull, another innovation – Kuhn’s idea this time – has added about half a metre of extra length to the saloon. In most cruising yachts the aft end of the accommodation is curtailed by the steering system, which occupies the last few feet of the hull and requires a bit of elbow room around it for maintenance and repair. On the Bavaria C42, it’s neatly slotted into a shallow recess under the aft end of the cockpit, allowing the aft cabins to be shunted further aft, but easily accessible from above simply by lifting a panel in the cockpit sole between the twin wheels. It’s a great solution, easier to inspect and maintain than the usual setup.

Above: Bavariaʼs brand identity has been preserved but itʼs a sleeker design with a low-profile coachroof and the style of the C42 is most definitely Italian. Itʼs the first Bavaria yacht with a chined hull.
Below: itʼs also the first model with the new VBow, which is set to become a key feature of the next generation of Bavarias. The V-Bow subtly but substantially increases the volume of the forepeak, making space for a huge sail locker 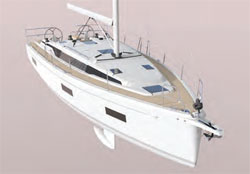 Benefits of a bulbous bow
The other obvious design feature of the C42’s hull – which sets it apart not only from the other Cossuttidesigned C-Line models but also from nearly all the other new boats at Düsseldorf – is a bow profile that flares out from a narrow vee at the waterline to a rounded, high-volume section at deck level. It’s a Cossuttiand- Ganz innovation derived from recent offshore racing yacht designs, with great potential for production boats. ‘Most modern yachts have a very wide stern and a lot of volume in the aft sections of the hull,’ Cossutti explains. ‘When the angle of heel increases, the hull gets out of balance. The stern comes further out of the water and the bow is pushed further into the water. As a result the pressure on the rudder increases. A vee-shaped bow with more volume, which we call the C42 Bavaria V-Bow, compensates for this effect and the boat is easier to steer. However, it was important for us to keep the bow narrow at the waterline so that the dive into the wave is not too hard when the boat is sailing upright.’

As with the chines, the new bow profile produced unexpected benefits for Kuhn’s in-house team who were designing the yacht’s interior. Thanks to its bulbous bow, the Bavaria C42 has a huge full-depth sail locker that can easily swallow a crossover sail, a gennaker and a full set of fenders and docklines, with a separate compartment for the anchor windlass and chain. The other big benefit is the extra space in the forecabin, which has to be seen to be believed. ‘We were able to expand the double berth to a width of 1.8m and a length of 2.3m,’ Kuhn says. ‘And we’ve got full headroom throughout the cabin and plenty of large lockers.’

Bigger sails, better balance
Another notable feature of the C42 s the height and position of the twinspreader, deck-stepped mast. It’s extremely tall and stepped further aft than you might expect. The extra height allows more sailpower and compensates for the loss of roach – as Kuhn explains, most buyers are expected to opt for in-mast furling mainsails. ‘When you get to 42ft long, slab furling starts to be hard work,’ Cossutti says. The difference in performance is minimal: ‘With vertical battens providing a moderate roach, you will have only five per cent less power. And in 10kts of wind, the self-tacking jib will give the same performance as the 110% genoa with a narrower sheeting angle, too.’

Moving the mast step aft is more to do with handling, Ganz explains: ‘We always take great care to achieve the best possible balance.’ With the mast stepped aft, the headsail and mainsail of the C42 are roughly the same size and deliver similar amounts of power, resulting in a nicely balanced sailplan. Selftacking jibs are typically small, but a large one actually makes a lot of sense. Not having to haul the sheets of a powerful genoa in and out with every tack is a definite benefit and the self-tacking option makes the yacht much more nimble. ‘If you are sailing somewhere like Sweden where there are lots of rocks you need to be able to tack very quickly,’ Cossutti says. The self-tacker is fitted as standard and in another nod to performance, the standard spec also includes a backstay tensioner.

Meanwhile, back in Giebelstadt, the next new model in Bavaria’s comeback range is already taking shape – shrouded in secrecy, of course – but with a host of new features and design ideas, the C42 is a taste of things to come.