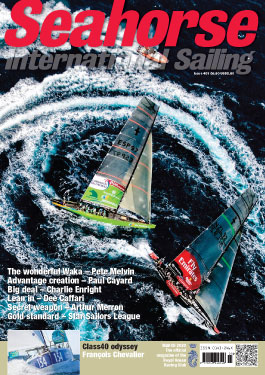 Big deal
Why that Transat Jacques Vabre fourth place in the Imoca class was priceless. CHARLIE ENRIGHT and JOCELYN BLERIOT

Best of the best
The Star Sailors League is doing exactly what it set out to do. JAMES BOYD travels to Nassau

That ‘man’ again
Round-the-world record holder DEE CAFFARI is delighted to have finally got hold of the research she needs... less happy it took a friend to pay for it

Who was Arthur Merron?
The world of boatbuilding throws up some remarkable parallels. CHARLES LAWRENCE

No limits at all

(Don’t) shake it about

Update
Early Cup words from Sardinia, the Cup mist refuses to lift, a complex Cup task, (good) wood is good and KENNY’s on the money. Plus why the French are ahead from the start, JACK GRIFFIN, TERRY HUTCHINSON, ADRIAN MORGAN, ANDREW SINCLAIR, MIKE GILLUM

World news
What you didn’t see in New Zealand, everything’s new in France in 2020, happy face for FRANCK CAMMAS, sad face (for now) for YANN ELIES, it’s only au revoir from GERY TRENTESAUX, a different Sydney Hobart future (perhaps). Plus US Olympic sailing, US offshore sailing, does none of it ever get any easier? DOBBS DAVIS, IVOR WILKINS, PATRICE CARPENTIER, BLUE ROBINSON, DAVE HUGHES, PETE MELVIN

IRC – When less is more
The trend to shorthanded racing is having some interesting consequences. JASON SMITHWICK

RORC news – How do they cope?
EDDIE WARDEN-OWEN