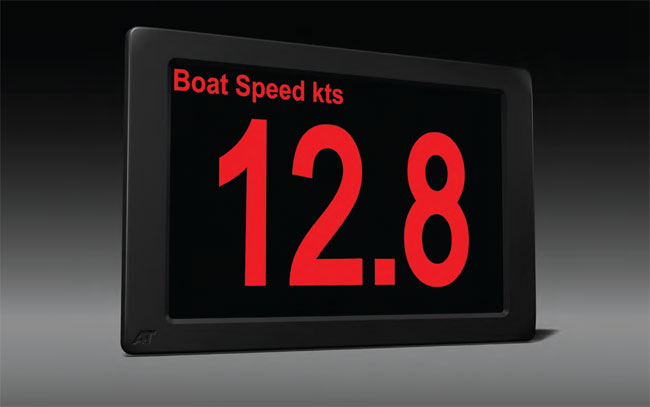 Even the best calibrated and most accurate performance instruments in the world are of little use if you can’t see what they are saying...

Being clear on what you are watching has never been more important. Modern instrument displays now play a crucial role and the A+T Big Format Display (BFD) is a game changer. Larger and brighter than any other display on the market, the BFD has the same footprint as a 40/40 display and yet its digits can be configured to be 50 per cent larger than these. But there’s far more to this new display.

The BFD is capable of displaying any number of panels or graphics, making it more of an infinitely configurable data screen rather than a fixed instrument display. Individual data can be assigned different colours for the digits as well as the background which helps to mark out crucial data from information that is of general, non-urgent interest.

The data can be contextualised with colour as well, so in the case of a panel reading running backstay load, the numbers could range through green, amber to red in order to provide a range of warnings as loads increased through to dangerous levels. Alternatively, or in addition, the background colours can be configured in a similar way.

Each display can be set with up to six pre-set layouts that can be cycled with an external button or selected on a racing mode, upwind, downwind, pre-start and so on. Alternate data channels can also be set up in one display area to save space for information that is non-urgent and doesn’t change significantly. This is particularly useful for data that is unlikely to be confused such as Course Over Ground (CoG) and Speed Over Ground (SoG).

Main picture: A+T’s new Big Format Display makes those critical numbers much easier to read. The BFD display unit is the same size as a regular 40/40 unit but can display digits 50 per cent larger. To achieve the required brightness in direct sunlight inevitably generates a lot of heat, which the BFD cleverly dissipates through its screen while remaining watertight.
Below: data read-outs – or backgrounds – can be shown in different colours to give them a bit more prominence. The BFD display here is shown at METS submerged in the A+T fish-tank... 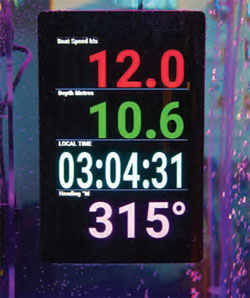 The ability for different crew to hone in on certain colours quickly and without ambiguity is an important part of the modern performance world. But providing such an important function also requires the units to be robust and reliable. And while this is at the heart of all of A+T instrumentation systems, it would be easy to underestimate the challenges of building a large display of this nature.

‘The fact is that it’s difficult to compete with the sun, but this is one of the key challenges of the environment we are up against, says Hugh Agnew of A+T.

‘Making displays clear in bright sunlight means achieving more powerful backlighting which in turn means heat. This heat needs to be dissipated and that becomes a challenge when you have set out to maintain waterproof integrity and the overall robustness of the unit.

‘Cracking this nut was always going to be a tough one but we have achieved our objectives by dissipating the heat through the screen.’ The ability to operate the displays in either landscape or portrait mode was another key detail that required careful engineering to cater for the polarisation that is necessary for the displays to work in both orientations.

The result is a display that is brighter, tougher and more energy efficient than anything else on the market and that comes with a power range of 10-36v DC as standard.

Each of the units is tested to one bar over and under pressure to take account of the additional pressure that heat and shipping by air can provide. Every unit is also run for an hour, submerged at one metre underwater before it is shipped to ensure its watertight integrity.

So, while the company’s goal continues to be to serve the largest and fastest boats in the business, this is also an arena where displaying the right data accurately and in an unambiguous way has never been more important.

Making mistake at speed can be costly and for some, disastrous. In the modern world of high performance, tripping up has never been easier. High speeds, be they aboard rocket ship raceboats or fast superyacht cruisers, are often accompanied by an eerily light feel on the helm. Traditionally, as boat speed increased, the load on the rudder would build too providing a warning that things were getting out of shape. But today such feel has been designed out in favour of high-speed hydrodynamic trim, reduced drag and balance.

The result is that sailing by numbers has not only become increasingly common, but crucially important. Keeping the boat on the boil, whatever it is, is far more about keeping on top of the numbers.