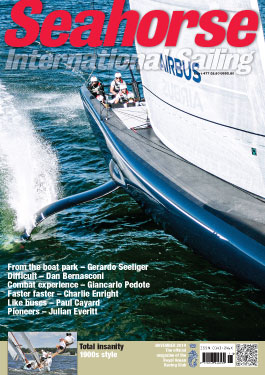 A little stress helps
But how much is a little? ROB WEILAND

Changing of the guard?
ANDY RICE watched as Enoshima Bay put on a rough display for Tokyo 2020 Olympic hopefuls

One hell of a team

Heart of the system

Update
The America’s Cup’s then and now… it’s really not so very different, putting it right after Dorian, up off the canvas and around the Horn, putting on the AC75 wings at last. TERRY HUTCHINSON, JACK GRIFFIN, GIANCARLO PEDOTE, GIULIANO LUZZATTO, DOBBS DAVIS

World news
Overwhelmed by foilers, then washed away by Imocas, is this the slickest raceboat ever to go afloat… pacing it in Palma, hamming it up in Hamo (really! ed), the pipeline was looking good… And firming up the US bridgehead in round-the-world racing. CARLOS PICH, GUILLERMO PARADA, IVOR WILKINS, BLUE ROBINSON, PATRICE CARPENTIER, DOBBS DAVIS, CHARLIE ENRIGHT, LEANDRO SPINA, CAROL CRONIN

IRC – Winning ways
The CV of Juan Kouyoumdjian’s Volvo winner Groupama 4 gets better with every change of name as those big trophies just keep rollin’ in. CHARLIE ENRIGHT

Maxi – the biggest and the best
Another successful show in Porto Cervo but there’s always room for improvement. ANDREW MCIRVINE