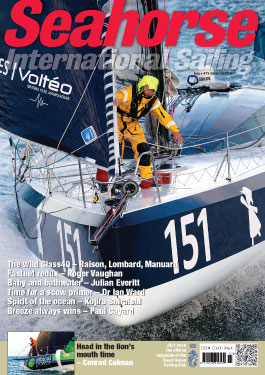 Sharing thoughts
Is it time to package up events tighter still… and cut down on a few air fares? ROB WEILAND

My Vendée
It is nothing like a yacht race yet it is one of the best yacht races of all. CONRAD COLMAN

K.I.S.S.
The Class40 has been an epic story, of ignoring professional rule managers and instead getting a few experienced yachtsmen in a room with a limited supply of paper. Now we are about to witness the next step for the class… LIONEL HUETZ, MARC LOMBARD, DAVID RAISON, SAM MANUARD, ANDI ROBERTSON

Refresher
Scows are the most important ‘new thing’ in raceboat design (and coming to a cruiser near you). So one of the modern pioneers of the genre DR IAN WARD looks at a little of the history

An expensive mistake?
Most things are easy in hindsight but the pointers were staring us all in the face. JULIAN EVERITT

Belief
Japanese Imoca skipper KOJIRO SHIRAISHI has quietly acquired a remarkable number of solo miles at sea, but his second Vendée Globe is still going to be a mighty challenge. YOICHE YABE

Update
Figaro 3… great fun but far from easy, of noisily breaking very big things, when one of the world’s most sensible (and successful) boatyards goes a little wild, pumping out to win… and to live. And don’t let the staff near the keyboard. GIULIANO LUZZATTO, TERRY HUTCHINSON, JACK GRIFFIN, WILL HARRIS, VICKY JACKSON

World news
Volvo winners both but still nice work if you can get it, scows are (definitely) coming, go the Netherlands… with a little Kiwi help, under the skin of the ‘new’ TP52s… and helping out the old ones. Plus more nice work… CARLOS PICH, DOBBS DAVIS, MARCUS BLACKMORE, IVOR WILKINS, BLUE ROBINSON, AARON MCINTOSH… along with most of the scow invasion force

IRC – Grass roots and weedy bottoms
Or why handicap yacht racing can turn into an extended round of poker. JASON SMITHWICK

Seahorse build table – Over to you
ANDREW BUCKLAND

Sailor of the Month
Round-the-worlders both...