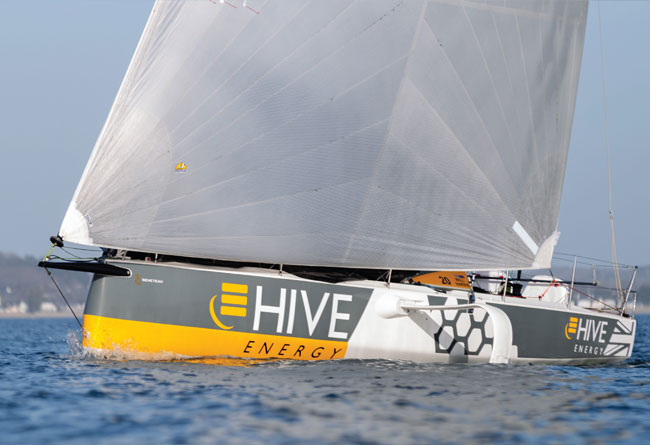 With its innovative Cable-less technology Doyle Sails has been making significant inroads into grand prix ocean and offshore racing fleets. A wide range of winners are now using Doyle’s cable-less technology across an increasing range of sail codes and configurations, from the top Fast 40 in the UK, Rán, to most of the major trophy-winning Maxi 72s – Momo, Bella Mente, Proteus and now Cannonball – along with the two 100ft Rolex Sydney-Hobart 2018 racers Comanche and InfoTrack and a number of new superyachts including this year’s Saint Barth’s Bucket winner Hetairos.

Cable-less technology was developed from 2016 onwards and was initially applied only to Code Zero sails, but its uses are constantly expanding. The Sydney-Hobart 100- footers have been using cable-less J-Zeros developed from the VO65s as well as furling J1s, A2s and A3s. But without doubt the hotbed of upcoming development for all major sailmakers will be the Imoca class as The Ocean Race joins the Vendée Globe as the twin peaks for crewed and solo round the world racing.

Doyle Sails’ Stu Bannatyne has already won The Whitbread/Volvo Ocean Race four times, most recently with Dongfeng and is now progressively turning his focus towards Imoca and The Ocean Race. Personally he may not be completely dismissing a tilt at a fifth round-theworld race win, and he is delighted to see the pinnacle event return to a development, Open class – albeit one with some one-design elements. Correspondingly he is drawing on his 25 years of experience as he formulates his ideas of what it will take to win The Ocean Race, what role he would like to play, talking to teams as they form and advising how Doyle Sails’ competitive advantage can work for them.

Main picture: Will Harris’s Bénéteau Figaro 3 flying a new Doyle Cable-less Code Zero that sets with a ruler-straight luff, with just a fraction of the halyard tension that’s needed for a sail with a conventional luff. Doyle’s cable-less technology is starting to make inroads in France, not just in the Figaro class but also in the latest generation of Imoca 60s, which are working on their sail wardrobes for the next edition of the Vendée Globe with one eye on The Ocean Race, too

Doyle is making progressive inroads into France, both within the Imoca world and also in the showcase Figaro Beneteau 3. ‘For a start there is going to be much more development going into the Imocas than they have ever seen before,’ he says. ‘Some of the budgets are going to be a bit higher than Imoca budgets have been in the past. There will be a design brief as soon as we know the course.

‘Thereafter it will require a great collaboration between the sail designers and the boat designers and engineers to come up with an all-round package that can win.’

One example Bannatyne cites is on a typical cable-less Code Zero, where the tack load is 50 to 70 per cent of that of than previous cabled sails – and with less luff sag, too. He has clear ideas of what it will take to win The Ocean Race and where cable-less technology could be a must-have game changer in the Imoca fleet.

‘Straight away the ramifications are significant,’ he explains. ‘When you think about designing new boats and new rigs for existing boats, you can take account of the load reduction across all of the sails. The weight savings can be quite significant. The Ocean Race is a particular special case with the Imocas because there is a onedesign mast and rig, so the big thing there is that everyone is looking to max out the righting moment because that is the limiting factor. So what we can do is limit the compression on the mast, because our cable-less sails require less load. We can carry bigger sails and push the boat harder without overloading the mast. I think that will be a very, very significant factor in the next generation of Imocas. For the new boats being built now, we can take that advantage of the load reduction to the hull structures and look to save a lot of weight,’ he says.

Cable-less technology integrates a continuous lens of unidirectional fibres which is designed into the luff of the sail, taking all of the loads from the tack to the head. Thus the load is shared along the natural load path of the sail rather than using a heavy, heavily loaded cable to keep the luff tight. On the cable-less Code Zero, the luff is actually pushed to windward to render it straighter and more even, but at a fraction of the load of a cable-supported sail. The luff can be eased and the sail flown at deeper angles. Solo or shorthanded sailors especially appreciate the quick and easy bottom up-furl that is made possible by the strands of unidirectional carbon running down the luff.

‘We started off with Code Zeros and have evolved into more upwind sails with a significant load reduction for a given amount of luff sag,’ Bannatyne explains. ‘So what we have been doing with the sails, the Code Zeros and now the headsails, is taking a bit of that gain in terms of load reduction – but not taking all of it – and taking a bit of it for less luff sag, so less load and less sag. Ultimately you are looking for the best compromise between these two factors to give the best performance.

‘We are reducing tack loads by 30 per cent so then the structural requirements of the boat are less. There is weight to be saved. And we are able to design sails that provide much more driving force. Because of the reduced luff sag, the draught is further forward and the resultant force on the sail is acting much more on the boat, so we are seeing huge increases in drive force.’

Above and below: Two more Figaro 3s with new wardrobes of Doyle sails: Alan Roberts (above) and Conrad Colman, seen in training mode off Lorient in Brittany where the new Bénéteau one-design class is mostly based. The foiling Figaro 3 is already regarded as the primary feeder class for skippers whose sights are set on higher things, including of course the Vendée Globe. 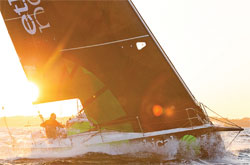 In common with all round-the-world race projects, getting started as early as possible will confer many advantages for The Ocean Race teams and Bannatyne observes at least one practical, key advantage in getting a sail programme started now.

‘As long as you have a budget to be operating, the sooner you start, the more you can learn. One of the milestone points of the Notice of Race is that prior to November next year there are no sail limitations, so if you can get a bunch of sail testing in before November next year then you can basically do what you like before the limitations come in for The Ocean Race itself. That gives a big advantage to teams who are early and can get a lot of sailing in before next November whether on an existing test boat or a new boat launched early.

‘The ideal scenario is to have a test boat up and going soon. Then you can test – budget dependent – foil concepts and different sail concepts. Then the longer you can leave your final new boat design and your sails, then then better off you are going to be.’

Meanwhile there is interest not just from The Ocean Race teams but also Vendée Globe programmes. ‘We are talking to all the prospective Ocean Race teams and there are a few other Imoca teams showing interest. We are gaining traction in the Imoca class, definitely. Jérémie Beyou has had a new cable-less Fractional Zero on his boat (Charal) since last year, which he has used a bit. Unfortunately he did not get far enough in the Route du Rhum to prove it very much, but that sail shows a lot of promise. We will keep talking to him. One of the things we are concentrating on is just slowly gaining traction in France. We don’t yet have a big facility there, but we do have an arrangement with a local loft in Lorient and our Doyle Solent Loft is only a ferry trip away with experienced Imoca/Orma man, Brian Thompson, ready to take those projects on. So for sure we can make it work with a few projects at a time, making sure we do a good job of looking after those ones,’ he adds.

‘Pretty much every new boat we do now incorporates this technology,’ says Richard Bouzaid, head of design at Doyle Sails. ‘Some of the more high profile ones in the Rolex Sydney- Hobart were the 100 footers Comanche and Infotrack with a few cable-less sails each. But we also then put a new mainsail on Comanche which was 10 per cent lighter than the previous one. Cableless sails are giving us a foot in the door with some of these high-profile programmes, and then we are able to try out some of the more conventional sails and jibs and spinnakers. That’s nice.’