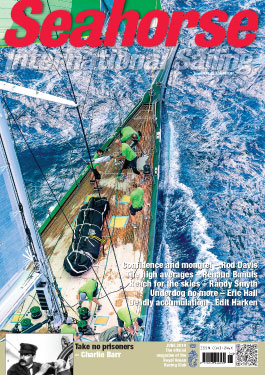 One hundred years later
Let’s focus on what can be achieved and then leave people to do their jobs. ROB WEILAND

Taming the talent
It takes time but eventually the full picture emerges of most of the great sporting heroes. And so we learn that CHARLIE BARR was not an easy man to manage. JOHN ROUSMANIERE

Orphan child no more?
Did the code zero really first appear on the dock in Southampton at the start of the 1993/94 Whitbread Round the World Race or was it a re-boot of something that had been around for quite a while? BRIAN HANCOCK

(Truly) something else – Part II
Turning the Eagle 53 foiling cat and its Hybrid Wing into reality was not the work of a moment. PAUL BIEKER, RANDY SMYTH, STEPHEN ROBERT, WOLFGANG CHAMBERLAIN

The new norm – Part II
If we are to plough on into the world of foiling Ultims we are going to be relying increasingly on the quality of the maths. RENAUD BAÑULS

Time to catch up
This may well be the most important Seahorse article you ever read. EDIT OLASZ HARKEN

Too good to refuse?
Rhode Island’s long love affair with the America’s Cup shows no sign of easing up. ERIC HALL

It’s about cost (not price)

Waxed cotton (not so much)

Editorial
ANDREW HURST
Surely things cannot go on like this… can they?

Update
Of business and billionaires, some things just don’t work out, an unwanted rocky start… and it’s (truly) a Laser fiasco. Plus it takes a lot to persuade us to do a book review, but sometimes… JACK GRIFFIN, TERRY HUTCHINSON, WILL HARRIS, ROB KOTHE, RODNEY PATTISSON

Seahorse build table – Crowdfunding
We’re in if you guys are. UMBERTO FELCI

Sailor of the Month
Recognising all the talents