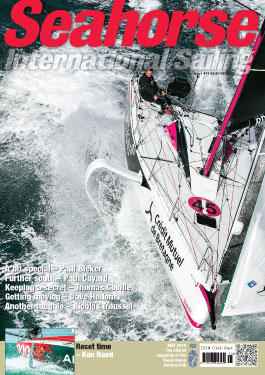 What’s in a name?
Where will the next great offshore racing dynasties materialise from? ROB WEILAND

The new frontier
Not so much a sport that is going in different directions as one that will soon benefit from some quite different approaches. KEN READ

(Truly) something else
Certain special boats can float quietly under the radar (see here page 57). We doubt this one will stay silent for long. PAUL BIEKER and ANDRES SUAR

Tsunami of talent
Non-Figaristes, beware… come the 2020 Vendée Globe there is a whole flood of fresh but extremely battle-hardened Figaro talent joining you all on match day. NICOLAS TROUSSEL talks to JOCELYN BLERIOT

To fly or not to fly…
DAVE HOLLOM has no concerns about the performance and manoeuvrability of the new AC75s. It’s getting going that worries him

Lean (and hungry)
There is good reason for those who train the current crop of America’s Cup sailors to be worried about keeping their charges healthy and happy. ALAN BOOT and MARK CHISNELL

Throw it out there

Not just a pretty face

Everything in its place

When life’s (not) a drag

A game of contrasts

Update
Will this America’s Cup ever start, good times sad times for the Super Series family, our man in the Figaro could have done without that. And a very American scandal. JACK GRIFFIN, TERRY HUTCHINSON, WILL HARRIS, DOBBS DAVIS

IRC – In pursuit of simplicity
Ideas come and go… some of them good. But keep your eyes on the prize. JASON SMITHWICK