All star cast (all star venue) 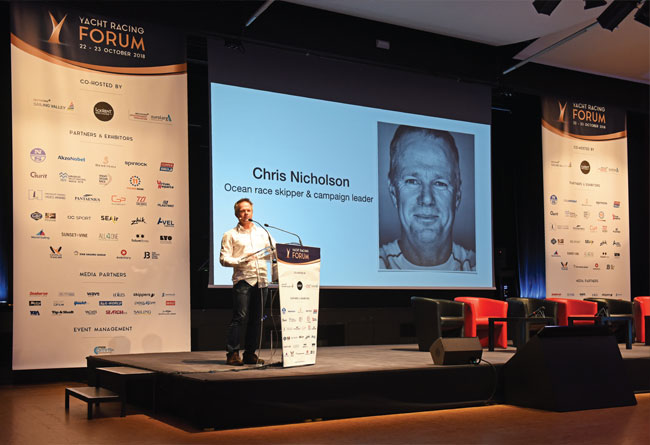 We all knew it would be good, but hosting the latest Yacht Racing Forum in Lorient – world capital of offshore sailing – was indeed a stroke of genius

With more than 450 delegates from all over the world gathering in Lorient, France, for two days of conferences, presentations and debates, the Yacht Racing Forum has confirmed that it is indeed the premier business-to-business platform for the sport of sailing.

Sailing history oozes out of Lorient, where Eric Tabarly is feted as a hero of French sailing, alongside living legends such as Franck Cammas, Michel Desjoyeaux, Loick Peyron and Alain Gautier, many of whom were present at the Yacht Racing Forum. The conference brought together no less than 450 delegates, while the exhibition space included around 20 stands representing the most dynamic brands from around the world that are involved in competitive sailing. Three state-of-the-art yachts were also on display: the new Figaro Bénéteau 3, the 26ft one-design foiling catamaran Easy to Fly and the Volvo Ocean 65 AkzoNobel.

Peyron shared his passion for cruising and racing at the Design and Technology Symposium on day one of the Forum. ‘When I’m racing, I’m dreaming about cruising. When I’m cruising, I don’t like to be inefficient,’ he explained. ‘That’s why many of our innovations from racing are useful for cruising.’

Technology trickledown was a big part of the discussion, with experts from some of the world’s most successful boatbuilders and sailmakers explaining the application of America’s Cup, Volvo Ocean Race, Class Ultime and other cutting-edge Grand Priz innovations to the rest of the sailing scene.

Main picture: in his keynote speech at the Yacht Racing Forum, the Volvo Ocean Race and Olympic veteran Chris Nicholson called upon World Sailing to embrace innovation. He also praised the vibrant and healthy professional racing scene in France and urged delegates to support Paralympic sailing as it battles to get back into the Paralympics

The Design and Technology Symposium grew yet again from the previous year, with interest overflowing the room capacity of 150 people in one space. This popularity was due in a large part to the location of the event this year in Lorient, the heart of French offshore racing technology, but it also reflects the widespread appreciation for advances in all aspects of sailing yacht technology, coupled with strong interest in where technology is driving and the parameters that are driving it within the America’s Cup, Vendée Globe, Volvo Ocean Race and other elite racing events. The topics covered included yacht and foil design, sensing technologies and performance analyses, modern film-less sailmaking, advances in standing rigging and composite materials, new fabrication and sustainability technologies.

Networking and the opportunity to rub shoulders with some of the sport’s big decision-makers is another reason for large numbers attending the two-day Forum. The high point of the social calendar was the gala evening reception provided by North Sails and Bretagne Sailing Valley, at the spectacular waterside Cité de la Voile Eric Tabarly – an interactive museum entirely dedicated to sailing and yacht racing, unique in the world.

The double Olympian and six-time Volvo Ocean Race veteran Chris Nicholson used his keynote speech to call on World Sailing to embrace innovation, and for the rest of the world to take notice of the vibrant and healthy professional racing scene in France. Nicholson also stressed the importance of supporting the Paralympic movement, deeply regretting the decisions taken recently.

Charles Caudrelier, winning skipper of the Volvo Ocean Race and Bruno Dubois, former team manager of Dongfeng Race Team, explained the strength of the French system and laid out a blueprint that other countries could follow to emulate its success.

Whilst several sessions focused on the high end of the sport, this year’s Forum also gave a large amount of space to youth sailing, dynamic classes and events for kids and youngsters.

However, the conferences devoted to the tremendous technological developments that our sport has enjoyed in recent years, as well as to elite sport, the America’s Cup, the Ultimate and Imoca classes, Figaro Bénéteau 3 or the future of the Volvo Ocean race, were the most popular among the delegates.

The next America’s Cup and its fascinating foiling monohulls was one of the key topics of interest, generating plenty of speculation about the future of the event. However things play out, Phil Lotz, commodore of the New York Yacht Club, is happy for his club to be involved again: ‘We have some ulterior motives to competing in the Cup,’ he admitted. ‘Yes, we’re sailing to bring back the America’s Cup to America, but also to bring America back to the America’s Cup. We have 11 American sailors on our team.’

Another area of interest was the fully crewed round-the-world race formerly known as the Volvo Ocean Race. It generated some heated debates, with speakers arguing whether the switch to the Imoca class would still allow female participation, give space to onboard reporters, and provide platforms that are usable by full crews and singlehanded sailors alike.

The Volvo Ocean Race veteran Richard Mason provided some insight into the next edition of the event, reflecting on some of the successes of the last race. ‘People have got used to men and women racing side by side’, he said. ‘It’s become a non-issue.’

While there were inevitably a lot of questions about the cost of a campaign, Mason reminded people of the value, too. ‘We had a million people live watching the tracker as the Volvo fleet was sailing across the top of Scotland. There’s no other sport that can do that. We need to remember what we’re worth as well as thinking about limiting costs.’ Mason also confirmed that the race’s new title partner would be announced in the ‘coming months’.

Below: Armel Le Cléac’h’s awesome 100ft Ultime class foiling trimaran, which has the theoretical potential of sailing around the world in well under 40 days, was a focus of discussions at the Yacht Racing Forum. Held just two weeks before the start of the Route du Rhum, the Forum attracted many of the race’s key competitors, including Le Cléac’h, Loïck Peyron and Sam Davies. The continuing success of the ‘more’ accessible Class40 was also high on the agenda, proponents hailing it as the only international offshore class where amateurs can still compete against the world’s best professional sailors 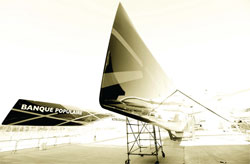 ‘From a commercial and institutional point of view, it’s not about the boats’, said Nathalie Quéré, campaign director for team AkzoNobel. ‘The big corporations and their boards and stakeholders don’t care about the type of boats used. What they’re interested in is the story and the potential to generate high-quality content.’

Quéré explained the long and challenging process of pitching a sponsorship proposal to a large corporate organisation. Her presentation was packed with useful information for prospective teams and campaigns looking to secure backing from a big multinational sponsor. ‘Don’t pretend you have all the answers straight away,’ she said. ‘Don’t pretend to be what you’re not. Just start an honest conversation with them and build a relationship from there.’

The Yacht Racing Forum took place two weeks prior to the start of the Route du Rhum, and reassembled some of that race’s key competitors including Armel Le Cleac’h, Loïck Peyron, Samantha Davies and many more. Since winning the Vendée Globe Race last year, Le Cléac’h has moved out of monohulls and on to his breathtakingly quick 100ft Ultime class trimaran, Banque Populaire. ‘Yes, the boat is capable of almost 50 knots peak speed, but I am interested in high average speed,’ said the French hero. He was looking forward to the Route du Rhum, but confessed that he was mainly looking forward to the solo round-the-world race in Ultimes, a race called Brest Oceans that is scheduled to start on December 29, 2019. ‘The idea of sailing around the world in around 40 days, singlehanded, is a fantastic dream,’ he added.

While it is hard to challenge the thrill and ambition of the Ultime trimarans, at more than €10m they are not within everyone’s budget. With no less than 53 boats on the Route du Rhum start line, the much more affordable Class 40 continues to go from strength to strength as the most successful offshore racing class. Class 40 promoter and offshore veteran Halvard Malbire claimed that the class is one of the most cost-effective today. While a new boat might cost around €600k, ‘you can buy a very competitive secondhand boat with good sails for around €250k. It is perhaps the only serious racing class where private individuals can race against some of the world’s best professional sailors.’

Inshore racing was also well represented, thanks in particular to the presentation of a new event that promises to be very successful: the Star Sailors Nations Gold Cup, a new World Championship of Nations. Its promoters announced that their event, fully funded, will bring together 40 teams from 40 nations to compete in a keelboat class measuring somewhere between 45ft and 50ft long. The 1996 Olympic Champion in the Finn class, Mateusz Kusnierewicz from Poland, presented the new concept and revealed that Robert Scheidt and Torben Grael were already organising Brazil’s entry into the event.

For its second edition, the competition brought together 28 videos, which were viewed online more than 350,000 times. English producer Rob Dickinson (Orillo Films) was crowned the overall winner of the Mirabaud Sailing Video Award thanks to a film recounting Team AkzoNobel’s journey in the Volvo Ocean Race 2017-18.

Click here for more information on the 2019 Yacht Racing Forum »