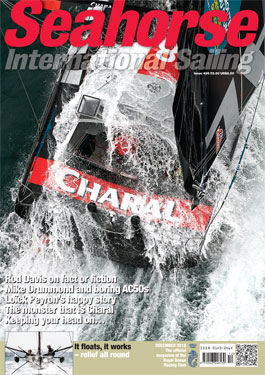 Done and dusted
That one was a battle. ROB WEILAND

Faster faster
If all goes to plan the SailGP series’s new F50 foilers will leave the AC50s of Bermuda trailing in their wakes. MIKE DRUMMOND, NICK HOLROYD and JAMES BOY

Rodeo time – Part I
This Rhum should make some people very happy… and others rather sad – especially in their pockets. VINCENT LAURIOT-PRÉVOST, QUENTIN LUCET, DANIELE CAPUA and JOCELYN BLERIOT

A head for sailing
Time to get serious. GORDON UPTON

Flying the flag
Former Luna Rossa helmsman CHRIS DRAPER was one of the first to be recruited by the new SailGP programme. He talks to JAMES BOYD

Come fly with me
Man, this one’s been a while. DAVE HOLLOM and MIKE LENNON give you the ‘Thinnair’

Moose on the loose

Seahorse build table – There is a choice
It’s not only about the big multihulls (though they can be quite pleasant). TOM HUMPHREYS

Sailor of the Month
The American Civil War… Hmm, not exactly