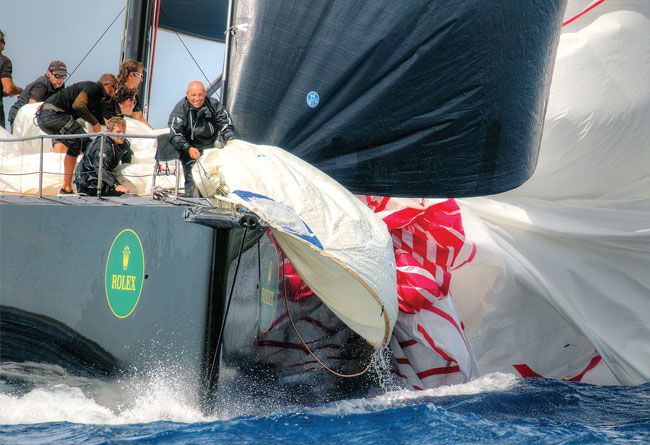 Back here in a rather grey and damp London it is difficult to believe that the 29th Maxi Yacht Rolex Cup was just a few days ago. This continues to be the undisputed flagship event for the International Maxi Association and is where it all started in 1980 (initially known as the Maxi Worlds, it did not take place annually until 1999, hence the discrepancy between years and events).

This year a wonderful and disparate collection of superb yachts assembled in the idyllic sailing conditions of Sardinia, hosted, immaculately as always, by the Yacht Club Costa Smeralda. There was the contrast of the massive black pin-tops on the Js compared with the bowsprits and gaffs (square-heads) of the modern boats almost harking back to earlier pre-Bermudian rig times…

In Porto Cervo we continued our long tradition of conventional starts for all classes, with the advantage this year of having two separate race areas so that classes doing the windward-leeward and coastal courses did not interfere with one another. Also different this year was the J Class opting to race within the Supermaxi class using the ORCsy rule as well as privately scoring using their own J Class Association rating.

And in among their more modern (looking) rivals these 1930s designs fared rather well. Topaz did not start as favourite but ended up just a point ahead of Velsheda to win her owner the Rolex time piece. The magnificent Reichel/Pugh 130ft My Songwon every race on the water but only managed to displace the Js from the top three places in one race on corrected time – and then by only 11 seconds.

The Maxi class included the no-compromise racer Rambler 88 competing with boats designed more as cruiser-racers. No rating rule can easily cope with the huge performance differences especially in different wind strengths – something not allowed for by IRC.

Once the wind got up on Friday Rambler won. But to show how difficult it can be the results show that in that 34.2-mile race the finishing time difference was 50 minutes… but the difference on corrected time was a mere 2m 16s in a race that took the winner 2h 34m to complete.

The Minimaxis were split into two classes, mainly on judged performance which could broadly be described as racer-cruisers vs cruiser-racers. This produced excellent racing with the former class won again, as in three of the past four years, by the Mark Millsdesigned Supernikka, probably the raciest of the racer-cruisers.

In the more cruiser-racer oriented division the largest and fastest, the Vallicelli H2O, had the only clean sweep of the regatta winning all six races. She also won in 2017, mainly due to being able to take full advantage of being the fastest boat in her class and enjoying a full week of clear air! In future perhaps we should run it like the football league with the leading boat in Division 2 being moved up to Div 1.

Main picture: in the Wally fleet in Porto Cervo the Mark Mills-designed Tango ended her first full season by tipping Magic Carpet off her perch as top-dog in Wallycento world… albeit by 0.5pt. Both Centos were beaten by newcomer Terry Hui’s Wally 77 Lyra. Competing under the ORCsy rule this year’s Supermaxi division was dominated by the three J Class boats competing, with Topaz (below) taking the top spot steered by former Alinghi helmsman Peter Holmberg; Topaz was designed by Frank Paine in 1935 and ‘then’ launched by Holland Jachtbouw in 2015 – call the delay design optimisation. The five Supermaxis were the only yachts not competing under IRC this year 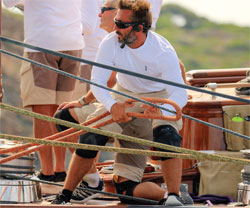 It looked as if the Maxi72 Worlds would see another picket-fence on the winning scorecard, but Momo tripped up to a single second in the penultimate race on the final day. However, Momo have now closed their programme and the twice world champion is surely a tempting prospect for a new owner? The 72s put up an impressive show of close racing and flawless boathandling – a joy to watch.

In the Wally Class the 77ft Lyra won five of seven races – the big surprise was that Lyra did so with a new owner on the helm who had never sailed a maxi before. He was of course surrounded by top professionals but it was still a great achievement for young Chinese- Canadian Terry Hui. The next three boats were all within 1.5pt, with the latest Mills design Tango just making it to the silver position. In the Wally Class we saw the opposite of the fastest boat sailing away in clear air, the three Cento 100-footers fighting each other all the way giving the smaller boats the space to find clear air well astern.

We now look forward to the Voiles de Saint Tropez to wrap up our inshore Mediterranean season. There we will have an excellent entry of 28 Maxis. After that comes the final offshore of 2018, the Rolex Middle Sea Race which for us opens the 2018-19 IMA Mediterranean Maxi Offshore Challenge Series. With both Momo and the much lighter Rambler entered it will be an interesting battle.

In northern Europe offshore racing is robust (in some size bands and specialties like the shorthanded classes it is growing) and we aim to take advantage of this change in emphasis by working hard to increase participation in offshore races in the Med – hence this series. We have had more boats involved this year but not enough doing the minimum three out of five races to score for the overall trophy. Congratulations to Carlo Puri Negri’s Atalanta II who won this year competing in four events.

Next year’s IMA Mediterranean offshore series is based on the best three of the 2018 Rolex Middle Sea Race, Regata dei Tre Golfi, 151 Miglia, Rolex Giraglia and the Palermo-Montecarlo Race. No reason not to compete in this great variation on the great classics and other soon to be classics.

We have recently distributed a questionnaire to better identify what maxi owners would like to be seeing and how the IMA can help. A major disincentive to maxi participation is the way classes are currently divided; racing on corrected time, an older or more cruiser-racer oriented Minimaxi has little chance against much racier smaller boats such as a TP52 or Cookson 50 – as well as against a race-oriented size-equal like a Maxi72. Therefore, we aim to encourage more Maxi entries by separating out a dedicated Maxi class at our supported events as well as where the number of entries allows us to separate true racers from racer-cruiser Maxis.

A final aspiration, which now looks achievable as we increase our membership and support from our partner Rolex, is tighter measurement and safety controls at all events to give owners and crews confidence that an IMA-supported event will always be of a suitably high standard and that if a boat has a current IMA certificate it will also have a clear measurement history. We also have several other interesting projects in the wings which I hope will support sailors in general, not just maxis – but more of that another time.

In Porto Cervo we also honoured George Sakellaris and his yacht Proteus as IMA Yacht of the Year, while last but not least the members (unanimously) elected Benoît de Froidmont as association president for the next three years. With Benoît, one of the younger Maxi owners, at the helm we look forward to becoming an even more forward-looking and hands-on operation.
Andrew McIrvine, IMA secretary general