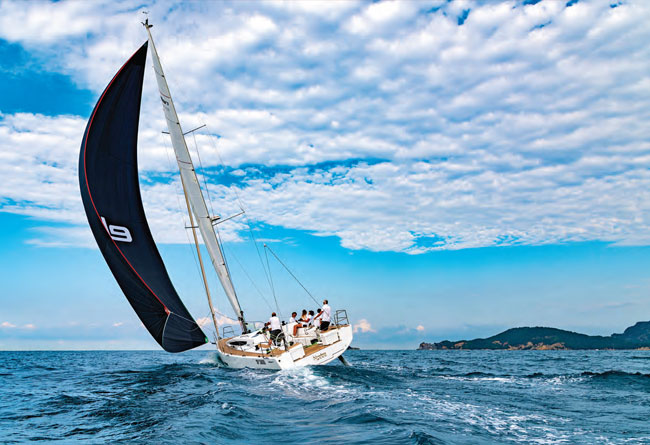 It’s easy to describe your latest design as a cruiser-racer but that often just means a boat that sits somewhere in between the two categories. Elan are taking a rather more scientific approach to their own product descriptions…

The Elan E-Line
There’s a gap right in the middle of the new boat market, which has been there for years. If you want a docile cruising yacht that’s designed primarily for novice sailors, there are lots of those to choose from. There are also plenty of options if you’re mainly focused on racing with a bit of family cruising on the side. But if your style of sailing lies halfway in between, you’ll no doubt have noticed that there aren’t so many genuine cruiser-racers in production.

This used to be an important segment of the market: yachts designed for experienced sailors who put the same emphasis on both racing and cruising, who value performance and comfort in equal measure, and who above all want a boat that is simply a joy to sail. It’s no coincidence that most of today’s “modern classics” were originally conceived as cruiser-racers. Today, by contrast, a lot of yacht builders expect their customers to make a fundamental choice between “performance” and “comfort”, and they produce yachts accordingly.

Elan has spotted this gap in the Venn diagram between racing and cruising, which it calls “crossover sailing”, and moved to fill it. Market research and new management have set the Slovenian yacht builder on a new course, straight down the middle. Rather than making separate racing and cruising versions of its highly regarded E-Line yachts, Elan is now focused on producing one really good, dual-purpose version of each model in the range.

‘We’re much closer to a boutique yacht builder than a production line operation,’ says David Rajapakse, Elan’s head of marketing. ‘This becomes obvious when you delve deep into the details of the boat: the quality of finish, technology and state-of-the-art equipment.’

Main picture: Elan’s E-Line yachts are genuine cruiser-racers aimed at experienced sailors who value speed and comfort in equal measure. The hulls feature very wide, powerful afterbodies with twin rudders and hard-chined quarters. A bulbed keel keeps the boats’ centre of gravity as low as possible and a redesigned cockpit makes them more suitable for twohanded racing and shorthanded cruising

Equipment Upgrades
Instead of offering a vast array of optional extras for owners who want to “cross over” between cruising and racing, Elan has given all three E-Line models a major upgrade, aiming to optimise them for both purposes. There are still plenty of options available, but all boats now come with a much higher specification of standard equipment, including a retractable carbon fibre bowsprit.

A headsail furler is now standard kit – a Furlex unit with its drum recessed into the foredeck to allow the foot of the sail to sweep the deck, closing the slot to give better performance upwind. Deck hardware has been completely upgraded and now includes premium brands such as Harken, Seldén and Spinlock, cordage from Gottifredi Maffioli and retractable mooring cleats that should be impossible to foul with the spinnaker sheets.

The yachts’ sail plans haven’t changed, but their standard-spec rigs have been upgraded. All boats come with a tapered, keel-stepped mast and an adjustable split backstay. ‘A keel-stepped mast allows more rake, it has a smaller profile and lowers the centre of gravity, which are all crucial benefits for a boat that has a performance pedigree,’ Rajapakse says. ‘We have also designed it so the usual risks of keel-stepped masts are negligible.’

Elan’s new “crossover” approach is evident in the boats’ cockpits, which have been made more spacious, easier to move around in and better suited to both singlehanded cruising and short-handed racing. ‘The winches have been moved closer to the wheels so that all sheets can be managed by the helmsman,’ Rajapakse says. Composite twin wheels are another notable upgrade to the standard spec, along with larger steering pedestals, which incorporate sturdy grab rails, and teak-topped bench seats. All laid teak on Elan yachts is “framed” with additional strips of teak set along the edges of the vulnerable end grain to protect it.

The E4’s German mainsheet system has been changed to a T-system (which the other models already had) because it’s safer to use, easier to maintain and requires less rope. The E-Line yachts’ cockpits have also been refined for cruising, Rajapakse says. ‘They can now be equipped with additional storage boxes and a swimming platform can be added.’ Crew safety has also been slightly enhanced by ducting lines and sheets out of the way to reduce potential trip hazards and by enabling the crew to retract the bowsprit from the cockpit.

Ocean Racing Pedigree
Elan’s existing E-Line hulls are well suited to their new dual role: a lot quicker and more agile than most cruising yachts, but also easier to sail short-handed and more comfortable to live aboard than your average IRC racer. Some of these boats’ stand-out features – powerful, hard-chined aft sections, low-slung bulbed keels and twin rudders – are inspired by developments in Grand Prix ocean racing as their designer, Rob Humphreys, explains.

‘To make a link between wholesome racer-cruisers and full-on trans-oceanic greyhounds may seem tenuous,’ he says, ‘and any direct translation of features from Volvo, Vendée or Class 40 type formats to the wider commercial sphere is never going to deliver the same proportional performance gains. However, it doesn’t mean to say that such features are carried over merely as marketing decoration or style statements, especially when there is a direct cause and effect in the development of a model range.’

This cause and effect goes back about 10 years, Humphreys says: ‘Sailors were increasingly seeking exciting sailing without sacrificing the dual role of comfortable cruising and part of this was the trend towards more powerful sterns with coincidentally more accommodating cockpits and better access to the water while at anchor.

‘With Elan, as we developed this aspect we moved early into twin rudders, which liberated afterbody power and space, and, in turn, we worked on increased form stability with more powerful aft sections, sectional shapes which dealt with operational heel angles but conveniently truncated beyond those angles by an integrated chine.

‘Whilst a chine might deliver a direct performance return on a Volvo or Open-style boat as it does in a powerboat, shedding wetted surface drag, on a moderate displacement yacht its contribution is more towards form stability.’

Bulbed keels lower the boats’ centre of gravity as much as possible, which allows their displacement to be reduced for a given level of build weight, interior fit-out and righting moment. Deep draught is crucial in this regard, Humphreys explains: the gain is magnified in proportion to the VCG (Vertical Centre of Gravity) gain.

‘What we have developed over the years for Elan is a cohesive range which displays many features honed in the unforgiving world of transoceanic racing, but with performance expectation proportional to a plausible impact,’ Humpreys says, citing the Elan 350, which evolved into the E4. ‘It was one of the first production boats that would actually plane rather than surf. Given the right ownership and dedication, such as by Tor Hove in Norway in what is a large and competitive short-handed fleet, a frugally appointed Elan 350 is devastatingly fast in the light and heavy, against any competition.’

Under the Skin
Elan has a long history of innovation in composite manufacturing. It was a pioneer of glassfibre boatbuilding in the late 1940s and one of the first to use vacuum infusion in yacht hulls, some 20 years ago. Today, it uses a process called 3D VAIL (vacuumassisted infusion lamination).

‘3D VAIL incorporates the whole structure of the yacht with the hull,’ Rajapakse says. ‘There is no secondary lamination, which makes the hull extremely stiff and limits the loss of force due to flexing. The hull’s closed cell structure makes it even more rigid – it's a common anecdote among Elan owners that when other yachts get damaged in accidents or crack under harsh conditions, Elan yachts are the ones still standing.’

The E-Line yachts’ interiors have been completely redesigned and made much more comfortable, with high quality natural oak joinery throughout. Beamy hulls allow for a very wide, sociable saloon and much larger than average galley and chart table. The electrical and plumbing systems have also been upgraded. But despite adding all this extra cruising kit in the standard spec, Elan has actually managed to reduce the overall weight of the boats’ interiors

‘Also, 3D VAIL ensures that the whole lamination is done at once, which means there is much less margin for error. This makes our yachts much more durable.’ Owners can add even more strength to their yachts by upgrading the resin used in the hull from polyester to vinylester.

All Change Down Below
While most of the exterior upgrades to the E-Line range are subtle refinements and improvements, the boats’ interiors have been completely redesigned with comfortable cruising in mind and the fit-out has been comprehensively upgraded. The standard spec now feels a lot more luxurious throughout, with plush upholstery and natural oak veneered joinery with solid wood trim. The hatches overhead are fitted with integral shades and blinds.

Thanks to these yachts’ wide beam, the main living space easily accommodates a settee with a fullsized, forward-facing chart table hidden inside – it’s deployed when needed by flipping the settee – as well as a large, fully equipped L-shaped galley with ample worktop space and stowage. The saloon is an elegant and sociable space where a full crew can lounge comfortably around the dining table with plenty of elbow room and a good view out.

The boats’ electrical systems have been upgraded, with full Bluetooth capabilities, plenty of USB ports and the DAME Award-winning SIMarine control panel – an impressive piece of kit that combines sophisticated digital controls with analogue overrides – now fitted as standard.

Doesn’t all this cruising kit add weight and affect the boats’ performance? Not so, says Rajapakse. ‘Even though it was redesigned to be more cruisingfriendly, we have actually reduced the weight of the interior.’