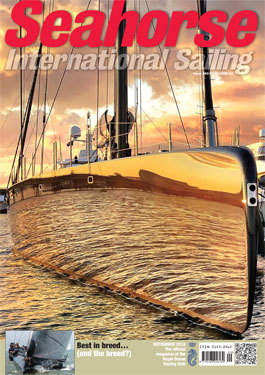 No place for wimps
KRIS KRISTOFFERSON

Pondering
When to push for change and when it’s (probably) better to leave well alone... ROB WEILAND

No coincidence
The success of the Class40 has not happened by chance and there are good lessons to be learnt. TOM HUMPHREYS on managed evolution

But first a new yard
Before ordering the first roll of pre-preg for the latest Fast40+ Rán there was the small matter of building a boatyard. JASON CARRINGTON

Not just a fast sailor

World news
And (some of) the Cup has already come home. Plus going a long way (in every sense) in a short space of time with KYLE LANGFORD and the New York YC’s ‘other’ big campaign... IVOR WILKINS, BLUE ROBINSON and DOBBS DAVIS

Paul Cayard – Sailing
Are how far does that go exactly?

IRC – First among equals
And a first look at the challenges of creating a new look dual-purpose Imoca 60. JAMES DADD

Sailor of the Month
Well who would you have picked this month?