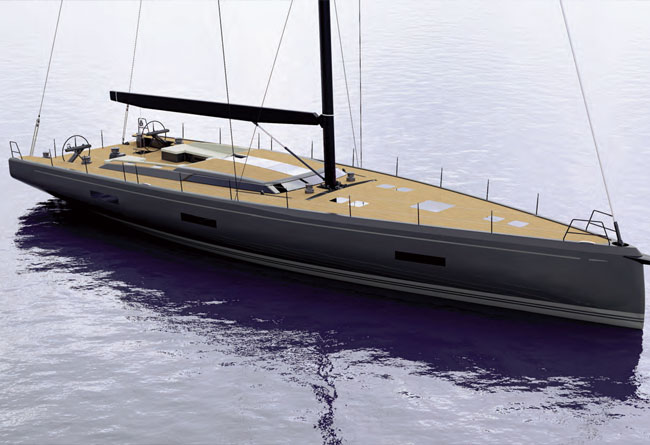 Speed, power, beauty. That is the essence of the Grand Soleil 80 Custom, the first of a series of custom and semi-custom projects to emerge from an ambitious new endeavour by Cantiere del Pardo.

The new facility in Fano, Italy, announced by Cantiere del Pardo in May 2017, is about to bear its first, rather impressive, fruit. The Grand Soleil Custom Yard will build special one-off projects too large and specialised to be handled by the main Cantiere del Pardo yard where Grand Soleil’s production yachts are built. In a partnership with the Adria Sail shipyard, a yard synonymous with high-tech custom boats in Italy, the construction of the new 80ft high-performance racer-cruiser was managed by Adria Sail’s master builder, Maurizio Testuzza, while Giovanni Ceccarelli took care of design, working closely with Cantiere del Pardo and the boat’s owner.

‘Cantiere del Pardo commissioned Ceccarelli Yacht Design for the naval architecture, exterior and interior styling for the new Grand Soleil 80,’ says Ceccarelli. ‘I was given a design brief, drawn up together with the owner and his consultant, Paolo Semeraro, for an 80ft highperformance custom-built sailboat for cruising and for racing in IRC or ORCi against other similar racercruiser yachts. Cantiere del Pardo wanted to explore the possibility of building a limited series of these yachts, updated from time-to-time to reflect an owner’s particular requirements. In the brief, certain basic parameters were fixed for this boat. It specified light displacement of about 33 tonnes and a keel weight of roughly 12 tonnes.’

For the hull, Ceccarelli gave himself a head start by unleashing the full analytical arsenal available to him and by narrowing the design options based on known performance. ‘Extensive use was made of CFD and VPP to design the hull and appendages, and the hull and structures were all validated by Italian structural designers Advanced Mechanical Solutions with FEM verifications. The brief drove me towards a hull form with high righting moment and a considerable beam. I’ve designed similar boats and the best five were CFD-tested, simulating a range of sailing conditions and wind angles, without appendages. Then we CFD-tested the best again, with a range of appendages added.

‘There are no chines aft because I don’t feel that they offer a performance advantage. Indeed CFD analysis shows that once the boat is heeled and the chine immersed, it becomes a brake. This is why the hull is clean and chineless, with moderate rocker and a moderate prismatic coefficient of 0.550. A lot of care was taken over the volume distribution, with the boat both heeled and level. The result is a very powerful hull, both in shape and waterline, with flared quarters and flat aft exits to minimise both the wetted surface of the hull and its wave resistance.’

Main picture: ‘Che bella!’ Designer Ceccarelli was briefed by Cantiere del Pardo to make sure this new custom project looked like a member of the existing Grand Soleil family and he hit the brief out of the park with his styling. In performance terms, Ceccarelli has drawn a powerful but chine-less low drag hull, while still carrying the maximum beam all the way aft for well-balanced offwind performance

It certainly looks powerful, so what sort of rig is developing all the horsepower? ‘The sail plan features a considerable J measurement, about 41 percent of LOA, in comparison with other boats of a similar type. This is to have headsails and a genoa equal to roughly 45 per cent of total sail area. Paolo Semeraro’s Banks Sails loft will make all the cruising and racing sails for this boat. There’ll be two mainsails, one pinhead for the cruising rig and one square top for racing, for which we have two running backstays on winches. When cruising, the two backstays will be fixed and their winches made available for sail handling.

‘The mast is deck-stepped, quite novel in a yacht of this size, which means it isn’t obstructing the interior. It also eliminates a critical point for water ingress. The chainplates are on the gunwales, angled at about 22° aft of transverse. Mast compression loads are transmitted through a longitudinal bulkhead to the keel structure.’

Cantiere del Pardo had made clear that, despite its custom nature, the Grand Soleil 80 had to share visible DNA with her smaller siblings. ‘The aim was to get a modern yet timeless style, one that would last, and one with clearly-recognisable Grand Soleil style,’ explains Ceccarelli. ‘The dimensions of the boat, in particular her maximum beam, which extends all the way aft, give her force and power. To reflect this I worked a lot on the coachroof, which has characteristic Grand Soleil styling in the cockpit coaming that sweeps forward into the side of the coachroof, and the sheerline where I introduced a highly-pronounced chamfer, which has a structural function and also serves the aesthetic function of lowering the freeboard forward.

‘The deck plan reflects the owner’s dual-purpose intentions. We went for two electric halyard winches at the foot of the mast, two primary winches in the cockpit for genoa and gennaker and a primary central one for the mainsail, between the two wheels. Aft of the helmsman, the two backstay winches, used while racing, are also useful for handling sternlines while mooring.’

Down below, the owner demonstrated an inclination towards the functional. ‘He wanted a boat in which luxury and modernity had to be coupled with classic yachting elements – it had to be a boat and not a floating apartment. Particular effort was made to create a sense of elegance, tradition almost, reflected in the quality of the furnishings and finishes, with a clean and essential design. Having defined the general arrangement on a boat of this type and size, the interiors are developed hand-in-hand with the owner. In this case I was lucky to have a hands-on owner who was very demanding about every detail, but at the same time was entirely realistic and had a clear vision of what he wanted.

‘All of the boat’s internal compartments are structural, created with PVC core and carbon skins, and the furniture features light, hickory veneers. Bulkheads in the living areas are clad with removable panels in composite and fabric, and when the yacht is converted into racing trim, most of the furnishings are easily dismantled and removed for weight-saving purposes.’

Regular and exhaustive consultation between the owner, the designer and the Grand Soleil Custom Yard’s build manager ensured a shared vision and a smooth design process. ‘Once we moved on from the preliminary stages, which helped to define the exterior styling, there have been no major modifications to the general interior arrangement – furnishings or structures – the sail plan or the appendages. Every detail was finalised in collaboration with the owner, with Cantiere del Pardo, and with the experienced build manager Maurizio Testuzza.’

Adria Sail’s Maurizio Testuzza, formerly of Tencara and Wally Yachts, is managing the build of the new Grand Soleil 80. Together the team focused on weight management and opted for a three-stage ‘outside-in’ lay-up using female hull moulds built within a robust structural framework with vacuum infused laminating throughout. The freshly demoulded result (above) is immaculate

Testuzza, who cut his project managing teeth with Raoul Gardini’s Tencara yard in the 1990s before moving on to work with the thenemerging Wally Yachts, explains the driving motivation behind the build. ‘The entire team, including the project’s structural analyst, focused on the building of a very stiff, lightweight boat, which in turn allowed us to create a luxuriously appointed yacht. The more weight we managed to save in the hull and deck, the more comfort we could build into the yacht.

‘The boat was built using female moulds for both hull and deck. The skins are carbon reinforced plastic sandwich using biaxial and woven roving carbon fabrics. Unidirectional carbon has also been used in highload areas. Skins, structures and bulkheads have been built using the vacuum-assisted resin transfer molding (V.A.R.T.M.) technique, with epoxy resins. The core for hull, deck and bulkheads is Corecell. Most of the composite components, including hull, deck and structures, have been post-cured to optimise their mechanical properties.

‘Rig and mast are supplied by Axxon Composites. The mast tube is high-modulus carbon fibre laminated in a female carbon mould and cured in an autoclave. The rig is fractional, with three pairs of tapered, sweptback carbon fibre spreaders. Standing rigging is PBO with a single backstay for cruising and running backstays for racing. Rig loads are supported by full-carbon panels glued and laminated to the hull using V.A.R.T.M. and floors have been infused into the bottom of the hull to bear keel loads.

‘The fin-and-bulb keel weighs about 12 tonnes and boat’s draft is more than 4.5m from the waterline. This generates impressive righting moment, and that stiffness allows the boat to carry more sail area than any other comparable racer-cruiser. The fin is Weldox 700 stainless steel, a high-strength steel with extraordinary toughness and resistance, which enabled us to reduce the thickness of the AISI 316L stainless steel plating, resulting in a lightweight, rigid structure. Both keel and bulb are outsourced and the bulb is CNC machined.’

As the first Grand Soleil Custom performance project launched by a new facility, the pressure was always going to be on to do something extraordinary, as Testuzza explains: ‘The biggest challenge has been to reduce weight. For this reason, the entire boat is made of vacuumcompressed carbon fabrics, vacuuminfused to optimise the weight of both carbon and epoxy. This is a highquality, no-compromise technique for a boat of this size. Hull and deck were laminated three stages: the outer skin was infused first, the sandwich core was glued and vacuum-bagged to the outer skin, and then the inner skin was infused. This allows us to reduce resin impregnation of the core, and so optimise the weight.’

Designing and building the Grand Soleil 80, due to debut at the Cannes Boat Show 2018, has been intense, as Ceccarelli reflects: ‘We’ve designed a performance cruiser, the first in a custom series, with her own personality in the style of hull and deck: elegant, contemporary and with a sporty character, a boat we believe will become a future point of reference, and a boat that will redefine “Made in Italy”.’