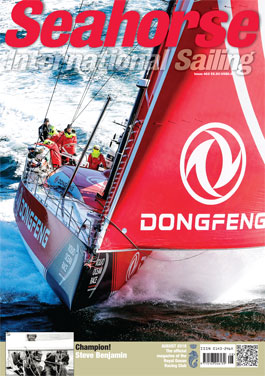 An extraordinary vintage
The Yale Class of 76 was exactly that and STEVE BENJAMIN was far from being the only sailor that summer to go on to much bigger things. DOBBS DAVIS

Delivery – Part II
Preparing for the Bermuda Race… albeit in 1926. CLARE MCCOMB

Oxymoron
Even a double Olympic medallist, Volvo Ocean Race winner and the current RYA Director of Racing is struggling a little with the ongoing Olympic classes selection process. IAN WALKER

Re-entry is a bitch
Often the finish of a round-the-world race can ‘simply’ see one set of all-consuming challenges replaced by another. BRIAN HANCOCK

In good hands?
Probably none better in fact… ROB KOTHE talks to the new owners of the Volvo Ocean Race RICHARD BRISIUS and JOHAN SALEN

Update
Quite the new (TP52) toys, Cup ‘foundations’ and is there (finally) some light at the end of the USA Olympic tunnel. JACK GRIFFIN, TERRY HUTCHINSON, BERNARDO SANCHEZ

World news
That six-second victory, on a very complicated racetrack, foils lose out again in Nice, ALEX THOMSON goes public (at last), 50 years ahead of the game... from one America’s Cup to ‘40’ and Class40 holds its ground over there... IAN BURNS, PATRICE CARPENTIER, BLUE ROBINSON, IVOR WILKINS, DOBBS DAVIS/p>

Rod Davis – Freshen it up
Get up forward to Marlboro Country, you worthless bunch of backstay hangers…

Seahorse build table – Coming on very nicely (thank you)
First it was 20 boats, then suddenly it became 40 boats… And now even that number is looking as if it may be an under-estimate. DOBB DAVIS