It hardly ever rains where we sail 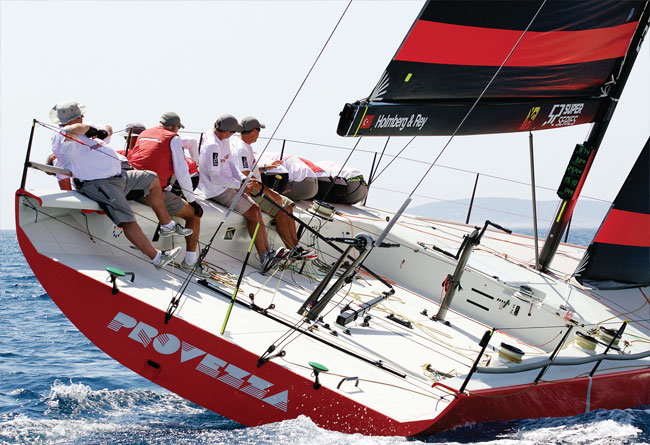 O rganising big boat regattas without a palm tree in sight seems doomed to fail. With the sun and blue sky as other desired features from there it gets more complicated to put a finger on what makes a successful event, let alone a successful regatta series.

Simply asking ‘Where would you like to race next year?’ or ‘What would make you come back to our event next year?’ seems like a good approach if you are not selling a particular club or location, a position 52 Super Series is in. But quite honestly it is not as easy as that because you are most likely to get a real answer only if you ask from August onwards, so when owners traditionally start thinking of and making first plans for ‘next year’. Why Copa del Rey is such an interesting – reliable – event for those in the marine business is that all of a sudden next year comes into sight as if a magical switch has been flipped each year.

For club events this autumn timing works, as their event dates and locations are fixed. Then adjusting what is on offer, the menu, so to speak, to the client’s wishes is still very possible when it comes to race format, regatta management, choice of staff and the certainly important social menu… the parties.

For clubs the more longterm concerns are sponsors, sponsor contracts and relations with authorities and marinas. As the number and quality of entries are not guaranteed there always is an element of uncertainty in longterm deals made with event sponsors and other stakeholders. For sure, it makes quite a difference to a sponsor whether there are 50 or 100 boats in an event and whether there are a good number of boats and sailors of name and fame or that it is a family affair.

Classes tend to have a number of their own events each year, together forming a series for an overall trophy. Quite a few classes use existing club events for this, in which the class has a start – the easy way as it keeps funding and organisation to a minimum and the events generally offer a quality, certainly on the social side, that is impossible to match for class events. Also, it avoids the hard work of finding sponsors... and pleasing them.

The class management will then try to get all the ‘ducks in a row’ on a nice dock close to the clubhouse, find parking for trailers, cars and containers, create the class start in the circle and under the race management that suits best (if there are options) to establish a bit of visibility and organise a class party or daily cocktails… and ‘Bob’s your uncle’, as they say.

If nicely played both host club and class benefit from the co-operation and after a few years you only have to be careful not to rely too much on past performance as too much routine quickly bores and makes us lazy.

Clubs like this symbiosis but also soon rely on it and can be really disappointed if a class reschedules to break the pattern. Fair communication and ample warning in case of a change of plans generally keep it civilised. In the end the product has to be the main attraction, not the PR – you cannot sail or party on words.

It gets much more complicated as soon as a class organises its own events or, the alternative, an event organiser builds its events around a class. The event organiser can have various reasons to do so. Commercial reasons, such as if the boatyard producing the class boats is the organiser, or perhaps the distributor of the class boats. Also, commercial interests exist where the event is an organiser’s main activity. Or, the opposite, an organisation born out of necessity or lack of alternative, like the 52 Super Series where in 2013 three TP52 owners felt this was the best way to get the class of boats they liked to race and owned back on its feet.

Two of just three Judel-Vrolijk designs racing the 2018 Super Series in a fleet dominated by boats from Botín Partners. Provezza is a brand new design built by Persico while Paprec Recyclage (below) is the former 2015 Rán; in this most grand prix of fleets Paprec’s owner Jean-Luc Petithuguenin always includes promising youngsters among his crew. Provezza’s deck layout is a stark example of what a grand prix yacht looks like when you ‘super-specialise’ it for one course type. Not too many starboard roundings please… 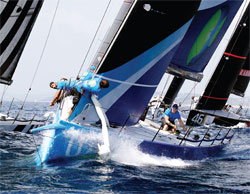 They certainly achieved their goal but as great as it is to have ideals longterm it needs more than that, just as there is probably little chance of having fun and success without hard work.

Whatever the reason for being, longterm it works best or maybe more exactly there can only be hope of ‘a long term’ if there is a realistic balance between all the interests in play, reasonable transparency and at times an open debate about functioning and future.

Certainly the more interests the more complicated it gets but the one that is special in our sport is how to involve the clients, the boat owners? Whether to involve them is not the question – they might not be interested but clearly that then has to be their choice. Nearly all are accomplished businessmen used to running more complicated entities than sailing events, spending much more on their boats than the event organiser has as budget to accommodate them, and nearly all are in it because it is their passion, which makes it special.

Just narrowing down to ‘where to race’, location planning. Within the sun, breeze, palm trees limits is it possible to find five dates and locations that will be unanimously embraced by your clients? I am afraid the answer is no. Not a ‘no’ as in they will not join but certainly a no that needs constant care and attention.

Problem number one as soon as you organise a series of five standalone regattas is that these need more time to plan than the traditional late summer owners’ planning of next year’s sailing allows. Not just by one or two months but more likely by about a year…

There is no hope of a match here and that is where it gets complicated. You know you have to ask the question ‘where do you like to race in one and a half years’ time?’ and you also know you won’t get a serious answer as most would feel giving that answer is pledging commitment and for commitment the timespan is generally too big.

Most classes and event organisers resolve this by repeating a yearly pattern of dates and locations, thus avoiding surprise and surprise criticism. At the risk, however, of boring the more adventurous owners into taking a break or seeking alternatives and limiting potential future participation by not travelling and ‘catching local boats and their owners’.

At 52 Super Series we try to cross the Atlantic every three years but have not achieved full support for this yet. More successfully we aim to mix trusted and generally appreciated locations with one or two new ones. Meeting new people, making new friends, sailing in conditions new to us, experiencing local ups and unavoidably some downs. Generally and certainly if the sailing has been good we return home satisfied knowing next time it will be easier to ‘sell the location’ and some even might become yearly favourites.

The other bone of contention is whether to race five events in five months, so one a month over the summer period or spread out and have a break in July-August, allowing for family holidays?

Certainly for owners with young children the break scenario has its appeal. It also has the appeal for the event organiser that it avoids the main tourist season in which everything is more expensive, more complicated and potentially very hot in the Mediterranean.

But finding good sailing conditions in October is not that easy if not going as far south as Sicily or Malta, and the same for starting early as well in the sense that it often rubs with new boats not being ready yet or crew racing in the Caribbean, and so on.

It is certainly not easy to please all but I guess as long as we keep trying to do so we stand a chance of pleasing most. Tell us what you like most and we will try not to disappoint.