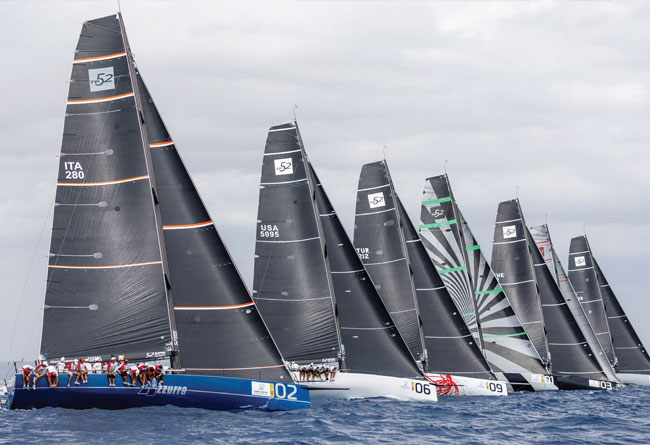 Nine new TP52s launched in 2018 with nine new Southern Spars rigs, but each of them carefully tailored to individual crew requirements…

With nine new yachts on the startline for the 2018 TP52 Super Series, it’s a testament to the health of the class and the commitment of owners and teams who continue competing at the highest level. Adding to the excitement is the fact that teams gearing up for the 2021 America’s Cup will be using the TP52 circuit to hone their skills in preparation for the new class of Cup monohulls.

Sir Ben Ainslie’s British syndicate has partnered with Tony Langley’s British Gladiator Sailing team, while Challenger of Record Luna Rossa have a new build for the series. Quantum Racing, with their connections to the New York Yacht Club challenge, are also a leading contender in the fleet.

First of the new boats launched was Sled, built in New Zealand for Japanese owner Takashi Okura. Sled has a number of Kiwi sailors onboard, including senior Emirates Team New Zealand member Ray Davies as tactician. Commenting on the evolution of the class, Davies notes: ‘Most teams have made changes to the positions of the appendages and the masts have been changed, the evolution being the stiffness of the mast and the position of the deflectors. Most of the new boats seem to be heading in the same direction. Everything is stiffer and more locked in.’

The single common factor across all nine new boats in this super-competitive environment is the selection of Southern Spars and associated Future Fibres as the rigs of choice. Southern Spars have been closely involved in the circuit from the outset and this across-the-board confidence in the brand reflects the results achieved on the racetrack.

Keeping pace with the evolution of the class has involved a relentless programme of rig development, which has delivered improvements in all areas. Looking at the numbers tells a story of precision engineering producing masts that are lighter, stiffer and more aerodynamic through each generation, while at the same time accommodating constantly increasing load demands.

Forestay loads, for example, have doubled from 4-4.5 tons to 8 tons; square-top mainsail areas jumped to 93.5m2 in 2010 and then to 98m2 in 2014; righting moments have increased to 12 tonne-metres. Meanwhile, mast stiffness has increased by 10-20 per cent, despite a weight reduction of up to 60kg in the overall rig with the addition of backstay deflectors and carbon rigging. The use of custom highmodulus carbon fibre and application of thin-ply technology combined with continual detailed refinement applied to every component have improved aerodynamic efficiency and weight.

Refinement of fittings and attachments has been a constant theme through the evolution of Southern Spar’s TP52 rigs. Early versions featured two spreaders, cathedral jumpers and clamp tang rigging attachments.

Under the 2010 rule changes carbon internal tangs replaced metal and Southern Spars introduced their thin-ply technology. Using ultra-thin layers of carbon, down to 50 microns, represents a significant improvement in the accuracy and precision of the structure.

‘It means our designers can add or shave fibre in tiny increments, so a mast is only as heavy as it needs to be,’ says Southern Spars director Mark Hauser. ‘Weight and strength are optimised down to microscopic levels to create very specific bend and load profiles for every mast. At grand prix level that measure of accuracy translates to performance on the track.’

Above: runner deflectors are now de rigueur in every one of today’s grand prix fleets. Composite work as art form (left)… the plug-in headstay socket on one of Southern’s new 2018 TP52 rigs.
Below: as thin and light as you (currently) dare; after a cautious introduction in 2016 Future Fibres’ solid carbon RAZR rigging system is being used by all of the nine new builds…

Through every iteration of these masts designers and engineers engage in a drive for aerodynamic efficiency. Anything that could interrupt airflow is hunted down and reduced to the smallest possible factor. Weight and drag reduction is pursued with obsessive attention.

One example is the development of Future Fibres’ RAZR rigging, the company’s new solid carbon rigging system produced for grand prix inshore competitions – the logical evolution for a fleet that is constantly chasing that one per cent performance gain, at the expense of everything else.

Commenting on this evolution, Jonathan Duval, research and development manager at Future Fibres, explains: ‘We started testing RAZR with just two boats in the TP52 fleet in the 2016 season. We wanted to create a new product that would push their rigging to the limit, giving the TP52 teams everything possible to reach their optimum level. After gathering data and working closely with the teams to refine the product a further third boat was equipped with RAZR in the 2017 season.’

This year, Future Fibres are supplying all nine new builds with the RAZR product. This is a great testament to the company’s dedication to innovation and the high-performance levels that the rigging has already shown during the past two series. ‘We wanted to create a rigging with the smallest diameter, great stiffness and lowest possible weight, as well as delivering a great mast tune,’ Jonathan concludes.

All of this has been achieved by Future Fibres with the development of RAZR, after a continuous process of research and development, where incremental improvements are chased relentlessly.

In producing the rig, the design process begins with a global analysis. Using two primary software packages, RigCalc and MemBrain, Southern Spars work directly with the sailmakers, applying their respective data sets of the loads and forces generated by the sails and how they deform throughout the wind range to simulate every possible load case.

‘A lot of effort goes into modelling for all these cases,’ says Jarrad Wallace, sales engineer at Southern Spars. ‘Our biggest challenge in the design process is matching the exact bend characteristics for the specific sailplan and stripping the weight right down to its minimum. This lets us make the mast laminate as heavy as possible, giving the mast its characteristic stiffness. We put a lot of work into that and we have to get the final weight very accurate.’

Despite the fairly narrow parameters of the rule, there is no one size fits all solution. ‘A lot of customisation goes into every rig. All the teams have different ideas about how they want to set up their rig and sail programmes. Some may want to optimise for light-air performance, others to focus on mid-range; some put a higher premium on upwind speed. Within the raw weight restrictions some want the weight distribution to be different, or to place the centre of gravity slightly differently. That all goes into the discussion.

‘There are a lot of variables and they all have a bearing on how the mast will be designed and built,’ explains Jarrad.

Once the design is agreed the engineering design and laminate architecture are calculated in conjunction with rigorous finite element analysis of major components. Physical testing of built components is also conducted to verify and refine the FEA process on an ongoing basis.

With the TP52 rigs the process from design discussion to finished product is approximately 16 weeks, with three weeks for design, two weeks for laminating and autoclave curing and 11 weeks for component production and assembly.

Given the highly competitive nature of the series – which may well ramp up as America’s Cup teams come into the picture – how does a single supplier like Southern Spars guard their secrets?

‘Different project managers are assigned to each team,’ says Hauser, who is very familiar with the need for confidentiality from long years of supplying rigs to rival America’s Cup, Volvo and other grand prix teams. ‘The project managers ensure any confidential issues are very well guarded right through the process.’

The TP52 Super Series represents the pinnacle of professional keelboat circuit racing, with a growing schedule of events around the Mediterranean and Adriatic coasts. It attracts a dedicated and highly competitive group of owners and sailors and every expectation is that the injection of America’s Cup interest will only raise the intensity levels as they hone their skills for 2021.

As each new generation of TP52 yachts comes on stream great attention is paid to what the various teams and their designers have produced to gain advantage. The pressure to perform ramps up across the board, from the sailors to the sailmakers and equipment suppliers.

‘It never ceases to amaze me how the sport at this level manages to keep evolving,’ says Hauser. ‘Every year we put the best possible rigs out there and it is hard to imagine how they could be better. Then through the season we work with the teams and review everything we have learnt. We apply all of that information, plus any technological advances that have arisen with materials or techniques, and pour it into the next generation of masts. The performance jumps are measurable.

‘Who knows where the limits are, but that is the fascination of technical sports like yachting. You never stop pushing the limits.’