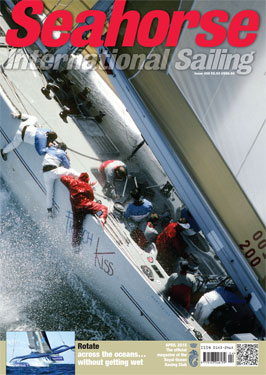 State of the ‘art’

It gets no easier
Gentlemen and players... ROB WEILAND

On to the next one
It won’t be there in Japan but it may very well be there when you get to Paris. ROB KOTHE

The great Victorian
... and a gentleman yachtsman with a very, very long name. JOHN ROUSMANIERE

The genie’s out the bottle

Update
The flying Banque Populaire IX in detail; don’t buy it use it; let’s ditch the (damn) triangle; running a Cup campaign is some kind of a job. Plus be in no doubt... we are going to capsize. JACK GRIFFIN, SCOTT DICKSON, PETER HEPPEL,TERRY HUTCHINSON

World news
ARMEL LE CLEAC’H is a happy man, the Class40 is still nuts, a lot of truth in the Kiwi legend, BILL MACARTNEY’S latest TV spectacular gets underway. Plus this time we will to make it to Bermuda (really). PATRICE CARPENTIER, BLUE ROBINSON, DOBBS DAVIS, IVOR WILKINS

Rod Davis – Just the three
When you finally get right down to it, it really is that simple

ORC – A new experience (for all)
And a time to learn... as the ORC and IRC fleets compete together at long last at the Hague

RORC news
And a celebration of sorts! EDDIE WARDEN-OWEN

Sailor of the Month
You don’t have to be a spring chicken, you know!