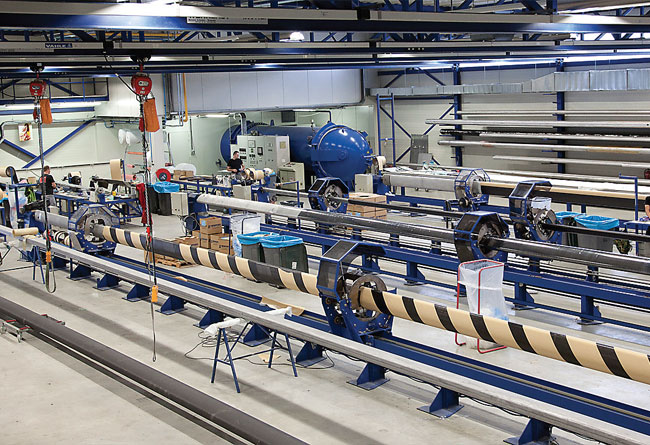 Almost every raceboat of any size built in the past two decades has been fitted with a carbon spar, as have many larger cruiser/racers and every large sailing yacht of any type over 20m. The advantages in safety and performance are just too great to ignore, and composite spar manufacturing has been refined to a remarkable level of reliability that exceeds even where alloy was at its peak a quarter of a century ago.

Hall Spars have been a pioneer in this field for almost four decades. The company has produced countless championship-winning spars, with a clear commitment to continuous development to remain at the cutting edge of a competitive field, where not only is light weight important, but strength and reliability are crucial. This is especially true for spars supplied for series-built production boats where efficiencies in production timing and cost are also important parameters.

Hall Spars’ approach to carbon sparmaking was from the very beginning to build their rigs in a seamless process, which has set them apart. Ben and Eric Hall recognised the advantages of using male mandrels in construction when they started building their first carbon spars in 1984.

With this method a tapered mast plug is selected, which matches the dimensions of the tapered and untapered portion of the spar. These are typically alloy extrusion blanks that have sections that can be added as needed to match the dimensions of the final product, and then made smooth. The simplicity of Hall’s mould designs also makes the sealing of these moulds straightforward, which in turn allows for high autoclave pressures to gain good fibre consolidation.

With the aid of a motor-driven mechanism to rotate the plug, unidirectional carbon fibre tapes are placed longitudinally as well as wrapped in tension concentrically around the mandrel so that the fibres are aligned to the load paths in the spar at a range of ply angles (typically 0, 45 and 90°).

Main picture: Hall Spars manufacture their custom rigs at their original plant in Breskens and in Auckland, along with a new service centre in Portsmouth, Rhode Island. Seamless has long been the company’s watchword: ever since they began making carbon spars back in the 1980s Ben and Eric Hall recognised the positive merits of laying up over male mandrels (below)

The tube is then reinforced with patch stacks of biaxial cloth used at attachment and reinforcement points outside the basic laminate, such as at spreader roots, halyard exits, the boom gooseneck, vang lug and so on. The amount of material, its modulus and cloth weight, number of layers and their orientation can all be customised to the locations where needed in the spar structure. This produces ‘power’ bulges on the outside of the spar where there is reinforcement. As this is a process where inside lamination is not required, it is faster and more cost-efficient.

After initial lay-up the laminate is wrapped tight and placed with its mandrel in the heat and pressure of an autoclave to catalyse hardening of the pre-impregnated resins. Once cured, the mandrel is removed and, with minimal grinding and fairing needed, the spar is either clearcoated or finished with a paint coating of the client’s choice. The result is a seamless carbon tube ready for assembly and, particularly when clear-coated (as it often is), the visual effect is always stunning.

Hall Spars’ use of a range of pre-fabrication and remote access techniques developed over many years ensures a strong, clean and effective internal fitout of the spar as well. This has benefits by reducing friction when internal halyards and other cables and fittings are run inside the spar. It also almost total eliminates carbon waste: all the fibre that is laid in the laminate ends up being cured into the spar.

In summary, advantages include:

Hall Spars were recently acquired by the North Technology Group and now operate out of their original facility in Breskens in the Netherlands as well as in Auckland and a new service centre in Portsmouth, RI, in the US. With successful integration into this major marine industry group Hall’s strong commitment to quality and reliability has only been reinforced.

‘We see the addition of Hall Spars as a further strengthening of the group’s mast-making skills,’ said Sam Watson, CEO of North Group’s mast businesses. ‘It broadens our reach with the addition of the male mandrel mastbuilding technology, which is a great approach for series production.

‘We are aware of the advantages both production processes bring, however, and will endeavour to ensure the client is always fully informed to make the correct choice.