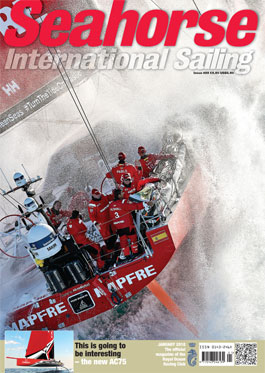 Oops!
And a respectful Seahorse nod to Santa Claus

The race that launched 1,000 careers
FREDERIC AUGENDRE takes the Figaro 3 prototype out for some testing of his own

Planes, trains and automobiles
Décision Composites outside Lausanne have been responsible for some of the fastest and most ‘edgy’ raceboats of the modern era. And plenty else besides. Founder BERTRAND CARDIS reflects on an interesting 30 years…

Cup heritage – Part III
From a disappointing Big Boat to an elegant if rather large ‘C-Class’ to a technical run through of the IACC America’s Cup era. ERIC HALL

Update
Well, this time it was always going to be about the Cup boat. Plus the growing case for a compulsory re-education programme for navigators – aimed at reminding them that the paper chart came before the transistor. The list of offenders is growing expensively… JACK GRIFFIN, RAY DAVIES, GRANT SIMMER and DON STREET JNR

IRC – One size does not fit all
A mainstream view from a grand prix expert. JAMES DADD

Design – Opening some very big doors
From the outside the boat just looks beautiful, but Gurit senior engineer SIMON EVEREST looks at the challenges that were hidden away out of view

Sailor of the Month
Two of the biggest guys in the sport… mes amis!