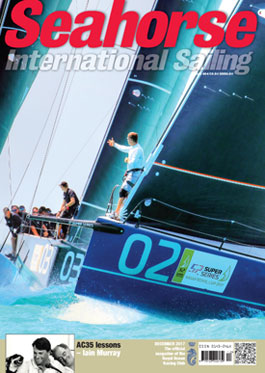 Surrogate?
In the new Cup Protocol TP52s are exempt from a ban on ‘Surrogate Yachts’ – only a part of the reason nine TP52s are in build. ROB WEILAND

Now that is the question…
There are obviously cases to be made, some class specific, for and against one-design. But one-design everything? Just some things? Then which things? KEN READ revisits the broad perspective

A level playing field… of his own
JEAN-PIERRE KELBERT and JPK in-house designer JACQUES VALER are second to none in turning out IRC winners. The queue for their next boat is second to none too…

Behind the scenery
Seen off the boat the mechanics always look to operate pretty seamlessly onboard the modern J Boat. But all that glistens… TED STREET

When lower is higher
The foiler Moth has hit new highs of technical performance and the focus swings back on sailing technique. Between them the Cup guys and Olympic champions have it nailed. Current design no1 KEVIN ELLWAY talks to ANDY RICE

Fast boats just got faster
Fast enough for Franck Cammas and tough enough for all you lot!

Warmer, drier, fresher
Boats getting faster also means getting wetter; so clothing demands only go up

Update
Devils, details, a second French ‘Vendée’ and our columnist gets an America’s Cup team (which is handy!) JACK GRIFFIN, ROB KOTHE and TERRY HUTCHINSON. Plus some special words on the entente from the always magnificent SIR ROBIN KNOX-JOHNSTON (a walking advert for the virtues of ocean racing, BTW)

World news
The remarkable people of the Caribbean. The TJV Grand Cru, go the ‘new’ Multi 50, inside (2021) track, US back in the game. GRANT DALTON, IVOR WILKINS, KEN READ, DOBBS DAVIS

Design – Look back in pleasure
Considering what has been created from scratch in a relatively few years… a revelation awaits. SEAN MCMILLAN

Sailor of the Month
The Cold War Edition