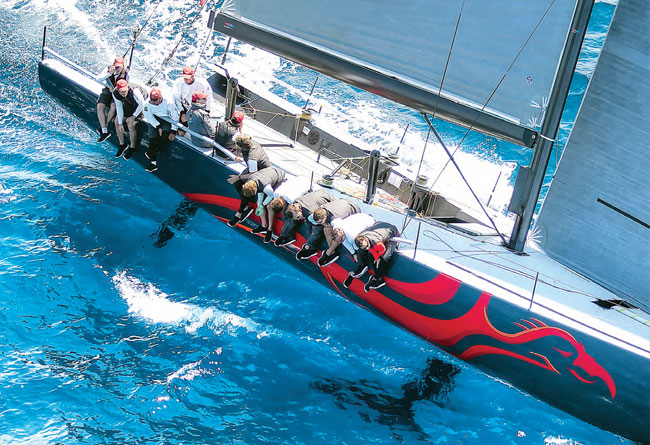 In the new Cup Protocol TP52s are exempt from a ban on ‘Surrogate Yachts’ – only a part of the reason nine TP52s are in build. ROB WEILAND

Main picture: So the wheels turn… American Richard Cohen put together a strong team late in 2016 including Paul Cayard, Peter Holmberg and Marco Constant (above) to campaign the 2014 Botín design Phoenix. He began racing that autumn before a full 2017 campaign. In January 2017 he unexpectedly put his TP52 up for sale. Phoenix was sold to Hasso Plattner, who was aiming to race mainly in South Africa; in fact, at the 2017 Copa del Rey Plattner, racing with his daughter, found he was having so much fun that he ordered a new Botín design for 2018…

Building new at Persico to a Botín design will be Tina and Hasso Plattner, who are first-time TP52 class members. A daughter-and-father combination on the helm is a first; we’ve already had father and son twice!

With the Protocol of the 36th America’s Cup specifically mentioning the TP52 as an exception to its ‘Surrogate Yacht’ rule one may expect the 52 Super Series to be a safe haven for AC teams aiming to practise monohull racing with a similar number of crew as on the future Cup boats.

The Protocol reads: ‘No competitor shall acquire, sail or test any Surrogate Yacht as defined in this Protocol and the AC75 Class Rule.’ And then describes a Surrogate Yacht as ‘Any monohull exceeding 12m LOA which is capable of producing meaningful design or performance information for use either directly or indirectly in the design, construction or sailing of an AC75 yacht, but excluding existing class yachts such as TP52s used only for the participation in and preparation for their class or any other official regattas.’ Quite special to see the TP52 singled out in the AC Protocol, thank you, Defender and Challenger of Record.

Already two AC teams have expressed their intention to join the 52 Super Series 2018. Land Rover Ben Ainslie Racing joins Tony Langley and the Gladiator team – with Langley remaining on the helm of his yacht – but I would say the sailing news of the month is the return of the New York Yacht Club to the AC stage, carried by two of its members who are both familiar faces at grand prix regattas, Doug DeVos and Hap Fauth.

They joined forces under the mouthful ‘Bella Mente Quantum Racing Association’ with Terry Hutchinson as skipper and CEO. In the margins of this project Doug DeVos also has a new Botíndesigned TP52 under construction, to be built in the USA at Composite Builders, Grandville, Michigan and Hap Fauth, a new Botín-designed Maxi72, to be built at New England Boatworks in Newport, Rhode Island.

No surprise then that Botín will be part of the NYYC AC36 design team as well; I am sure there is a story behind this as Botín were in the Luna Rossa camp for the 35th edition of the Cup till the plug was pulled on the red moon. I bet client loyalty to Doug DeVos and taking the longterm perspective helped Marcelo Botín to decide in what must have been a difficult choice. Talking about Luna Rossa, I reckon you will see them in the 2018 Super Series.

I expect in the 2018-generation Botín boats to see further refinement of the 2017 Interlodge (now Gladiator) concept in which the sail plan was moved aft slightly in combination with changes in hull volume distribution and appendage sizing and positioning.

Rolf Vrolijk, drawing a new Platoon and Provezza, will try to keep some of his 2015 boat’s dominance over 12kt of breeze but has the clear task of coming up with a design that is easier to sail in the light-medium conditions so often experienced in the Med.

In the end both designers will find ways to be just a little more all-round than the previous-generation TP52s and, yes, to be a bit faster…

The 2018 TP52 Rule has very few changes from the 2017 version. I pushed for slightly lighter boats and a little more mainsail area but bowed to the members, deciding that rule stability should be more important. Because of the latest EU and US emission rules we did have to upgrade our trusted Yanmar engine to an updated version from the same manufacturer. More electronics involved and a slightly heavier engine but, with the older model now discontinued, there was little choice.

As we also cleaned up our rules on the use of titanium, I hope some of the weight ‘lost’ on the new engine will be recouped by introducing titanium where so far stainless steel was used. It is not easy to keep a good balance between logical rule improvements unavoidably creating differences between generations of boats and keeping the previous generations competitive. But we have always managed to agree on the changes and this time was no exception.

The Notice of Race for the 2018 Super Series will be posted in December. We should possibly open up our thinking to introducing some match racing in addition to our regular five days of fleet racing. Whether to do this and how to run it will depend largely on the interest to support this.

Where one can expect AC teams to back the idea I am quietly confident we will also see support from the private and owner-driver teams. Variation will spice things up a little and if fitted into the traditional training days it will not add to the time spend for each event.

So not much change at first sight but then again many new boats, many new faces, two new regatta locations (both in Croatia), existing boats changing hands, new bow numbers, new hull colours… It certainly will be more than interesting to watch, if not compete. In a sailing world without much direction it is quite amazing to see that what we started against all odds in 2012 now seems to be leading at least some of the way.
Rob Weiland, TP52 and Maxi72 class manager