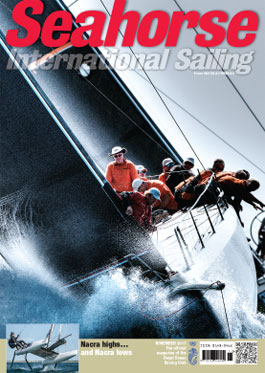 Children of chaos
All agree that the foiling Nacra 17 is a stunning Olympic machine. Not everyone is thrilled with the problems of joining the fleet. ROB KOTHE

Cauliflowers to (very fast) catamarans
Vendée Globe winner Armel Le Cléac’h had some formidable technology on his side on Banque Populaire – but not all of it was from the usual suspects...

Pickled herring all round
And it’s away to Aarhus in Denmark for the 10th anniversary Yacht Race Forum, sailing’s premier conference

Update
America’s Cup then and now – in more ways than one. Racing a Volvo on the hoof? DEE CAFFARI, JACK GRIFFIN and BLUE ROBINSON

World news
Maxis keep getting better (and faster), the pressure on the (runaway) favourite, back around the wrong way, bucking the (IRC) trend, big shoes to fill, Multi 50 resurgence, Hamo is rebuilt and a Caribbean we can help to rebuild. IVOR WILKINS, DOBBS DAVIS, PATRICE CARPENTIER, CARLOS PICH, BLUE ROBINSON

Sailor of the Month
Two champions one language