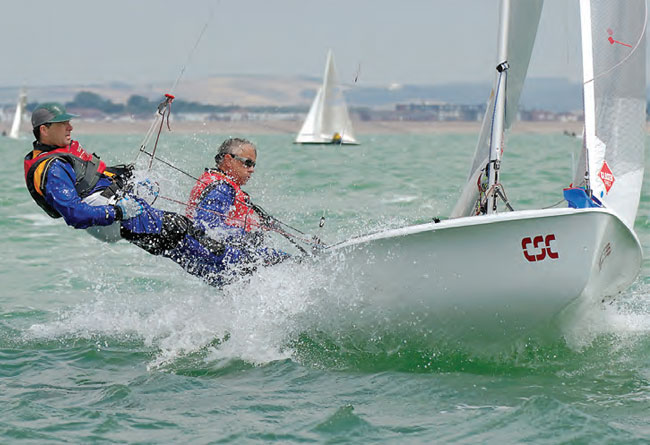 Give me a fast boat, any fast boat. ANDY RICE

Making sense of sailing is hard enough when you’re in the race, let alone when you’re on the outside looking in, whether as organiser, coach or spectator. But the advent of accessible GPS tracking is now starting to make things easier to understand and Germanybased software giant SAP is working hard to refine the technology while – and this is crucial – also making it relevant at a level of regattas below the rarified heights of the America’s Cup.

SAP was founded in 1970 by well-known racer of maxis and 505s… Hasso Plattner along with four of his fellow former IBM software engineers. So a healthy racing connection from the start. Today Milan Cerny is the innovation and technology lead for sailing at SAP Sponsorships. ‘When we started working with SAP Analytics in 2010-2011 it was not much more than a live leaderboard on the edge of the screen… though that was already quite a breakthrough for the sport!

‘Making sense of who’s in the lead and how that lead is changing from one side of the course to the other, it’s not even that easy to know for the sailors, let alone those watching from outside.

‘Bit by bit over the last five years we’ve added more and more functionality, working closely with sailors and race officials to help make sense of the racing by taking advantage of the data that we can now grab from the boats, the wind and the racecourse.’

Cerny says they have designed SAP Sailing Analytics to appeal to three distinct groups: the competitors, the race officials and the fans. So Cerny and his team developed a race management app to help make the whole process of running a race more precise and efficient. ‘The app now enables the race officer to digitally lay out his racecourse together with the schedule for the day.

‘I would say that was a big step forward for the process of organising a regatta. It sounds simple but it’s actually very challenging to make it happen.’ With everyone on the race team – including the mark-laying crews and umpires – all with access to the same data on the app, Cerny says it helps keep everyone on the same page as the race officer and so enables the regatta to proceed more smoothly and with fewer delays.

For the competitors and their followers their needs are much the same, according to skiff sailor and racing commentator Andy Rice. ‘Watching pretty images of boats racing is beautiful but in itself not that informative,’ says Rice, who has been commentating on the Olympic classes at World Cup Series events for several years.

Seahorse readers will be familiar with SAP co-founder Hasso Plattner as a maxi competitor – less well known is an enduring passion (main picture) for racing 505s, competing in numerous events over many years. No coincidence then that SAP is also a major sponsor of the 505 class itself and used the 505 worlds (below) in Aarhus in 2010 as an early test of its Sailing Analytics system 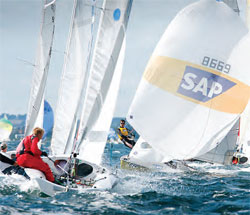 ‘Having the live data from the SAP Sailing Analytics helps bring those pretty pictures alive. We knew the pin end of the line was 10° biased, but why did the boats at the other end of the line take the lead less than five minutes later?

‘The data helps inform us, the commentators, of when and why the lead is changing, who’s faster through the water, who’s sailing the shortest distance, who’s making the fewest or most manoeuvres, what the tack-loss is for different boats, and so on.

‘You can see who are the risk-takers, the ones who prefer to bounce out to the corners of the racecourse compared with the steady-up-the-middle, more conservative sailors. This information is great for painting a much richer picture for the fans following the racing, and the very same data is great for the sailors to analyse what they did right and what they did wrong when they get ashore at the end of the day.’

So what comes next? Using the technology to help umpires make instant decisions perhaps, as we’ve seen in the past two America’s Cups? Or using GPS positioning to confirm who has jumped the gun at the start? Cerny says that it’s all possible, but with some clear caveats. ‘Of course it would be nice to rule out human error from some of these critical decision-making processes, but you can’t 100 per cent rule out system error either.

‘Out on the water in a damp, salty environment, with potential problems of internet connectivity, there’s a lot to think about before you’d go over totally to systems-based race management. The human factor is vital, and will be for a long time to come.’

But while systems-based event management is now active across sports like tennis, cricket, football, ice hockey and basketball, Cerny believes the next big gains for sailing will be in using the technology to simply make the sport more spectator-friendly.

‘It’s a beautiful sport to look at, but it’s much harder to understand for those who don’t participate in sailing – other field-based sports tend to be much easier to grasp even if you don’t have the advanced technology.’

However, what SAP Sailing Analytics has shown is that you can start to explain the complexities of racing even to a lay audience. Well-presented live data has become a vital part of bringing the story alive. With augmented reality on the horizon the future for live sailing coverage looks healthy.