Moving on from Rio 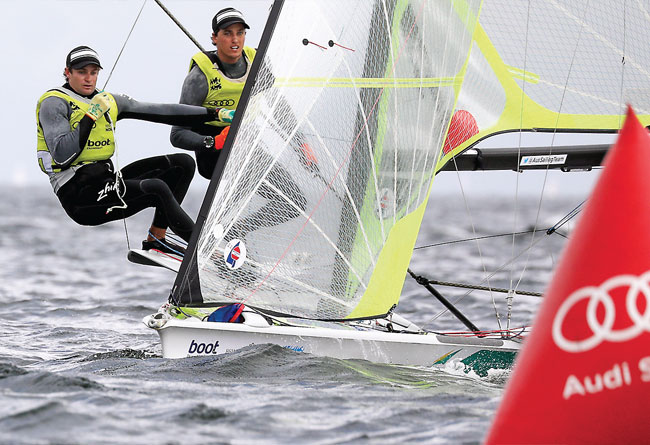 While two flying boats grabbed the headlines in Bermuda a very much bigger... 135-year-old regatta was also taking place in northern Germany

For the organisers it was another typical Kieler Woche… this year attracting 4,000 sailors from 65 nations, competing in 1,700 boats of all shapes and sizes. The race committee started more than 400 races over the nine-day regatta.

Kiel Week is one for the bucket list and you really have no excuse not to take part at least once in your sailing career. Aside from the high-profile Olympic classes, there is every kind of keelboat class plus junior and senior one-design fleets such as the Laser 4.7, the 420 and 505. From the seasoned pro to the almost-beginner, there is something for every sailor.

This year’s Kiel Week, ‘Kieler Woche’ as locals refer to it, attracted some of the biggest names from Rio 2016. The irrepressible Robert Scheidt was back, now in a 49er with fellow Brazilian Gabriel Borges. ‘I first came to Kiel Week in 1993 when I was 19. My mother was with me and I was racing the Laser,’ Scheidt recalls. Three years later he would go on to win the first of his five Olympic medals, a gold in the Laser at Atlanta 1996, beating a certain 19-year-old from Great Britain, Ben Ainslie, into second place.

Scheidt has since competed in numerous Kiel Weeks, first in the Laser and then in the Star, winning a few trophies along the way… Now 44, he started this year’s regatta well, lying third after day one’s racing in 10kt of breeze. Not bad for an old dog trying to learn new tricks in the trickiest of Olympic skiffs. ‘If the breeze gets too strong you will see a different side of my abilities,’ laughed Scheidt. ‘Maybe some swimming!’

He wasn’t far off the mark because when the breeze did kick in the legendary Brazilian tumbled out of the top 10 to finish 17th overall. But at this early stage of his skiff career, he’s not worried. ‘We are just out to enjoy the boat and learn how to sail it and then we will see what happens,’ says Scheidt. After he narrowly missed out on a record sixth Olympic medal after coming fourth in the Laser in Rio, one has to wonder if Scheidt believes he has it in him to win that elusive sixth medal at Tokyo 2020, when he’ll be 47 years young. Don’t bet against this bloke…

Other big names from Rio included 49erFX silver medallists from New Zealand, Alex Maloney and Molly Meech, who finished second in Kiel. The 49er bronze medallists Erik Heil and Thomas Ploessel just missed out on a medal on home waters, and it was an agonising fourth place in the Finn for Max Salminen, London 2012 Star gold medallist.

This being a new Olympic cycle, many are trialling new partnerships including Rio bronze medallist in the Nacra 17 Thomas Zajac. The Austrian is now teamed up with Barbara Matz and together they dominated the Nacra course. They will be back again this month when Kiel hosts the combined European championships for the 49er, 49erFX and now-foiling Nacra 17s.

A special part of this year’s Kiel Week was the Para World Sailing Championships – a key event in the quest to get sailing back into the Paralympics for 2024. The International Paralympic Committee (IPC) was expecting to see a minimum of 35 participating nations in Germany and the regatta ticked that box – more than 80 sailors representing 39 nations.

Aside from the well-established 2.4mR (now the Norlin 2.4mOD), this was a debut for the Hansa 303, a small keelboat not specifically designed for disabled sailing but well-suited for the purpose. Victory went to Poland’s Piotr Cichocki in the Men’s division while Spain’s Violeta del Reino won the Women’s. Local sailor Heiko Kroger was also delighted to emerge victorious in the battle for his latest 2.4m gold.

The regatta served as a milestone on the road back to the Paralympics. ‘Congratulations to Para Sailing for its strong development over the last few months. Nearly 40 nations and a large number of participants on the racecourse were two of the requirements from the IPC,’ said John Petersson of the IPC Governing Board. Petersson competed in five Paralympic Games as a swimmer, winning 15 medals including six gold. He enjoyed seeing the Para Worlds integrated into Kiel Week, where disabled and non-disabled sailors can compete alongside each other. ‘It’s great to have the competitions combined here; both parties can learn from each other and enjoy each others’ company.’

Nothing can quite match the breadth and depth of sailing on display at Kiel Week. Which may be why so many sailors return year after year.