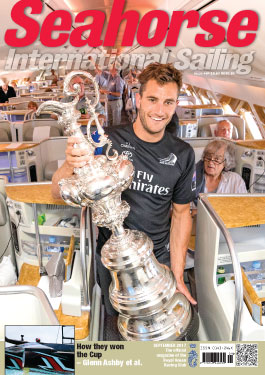 THE 36th AMERICA’S CUP
And now it’s all about what happens next...

Early signs
And IVOR WILKINS already knows a lot more than he is quite ready to let on... So watch this space

Incoming
But new rating office director and IRC supremo DR JASON SMITHWICK has yet to decide...

My... we do breed ’em
There are some quite remarkable people who are drawn to race sailing boats... TIM JEFFERY sits down with DR FRANK NEWTON OBE

Tomorrow’s (IRC) design today
BERNARD NIVELT has led the charge to lighter, faster IRC designs. And this is the fastest one yet...

Passione
… is everywhere on the latest WallyCento

Ten years and growing
And this year it’s the turn of Aarhus, Denmark

The 2018 Grand (Caribbean) Tour
Can’t make up your mind, why not have all of it?

Update
How the Cup was won and why the Golden Globe in 2018 is going to be such a huge story. ROB KOTHE, JACK GRIFFIN and TERRY HUTCHINSON

World news
IVOR WILKINS loves a parade, CARLOS PICH with a (complete) change of tone for the Barcelona World Race, VINCENT LAURIOT-PREVOST and PATRICE CARPENTIER race the Atlantic, the JOYON-COVILLE battle without end and DOBBS DAVIS watches the return of a wizard

World Sailing – Some legacy
Give me a fast boat, any fast boat. ANDY RICE

Design – Welcome back
A long time ago (boys and girls) there was a fast type of yacht called the GS34. And now it looks like there is about to be another one...

Sailor of the Month
Two masters of all they survey