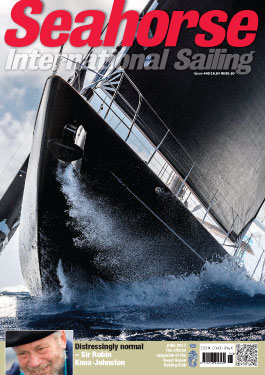 (Taking it) in the right order
With the launch of the ClubSwan50, Nautor has rewritten the book on how to ensure the best possible one-design racing with a new offshore class

Wow!
With just a few weeks to go the AC technical teams are still getting surprises. KEN READ

A bad mix – wolves and sheep
Which is why we must work hard to keep them apart. ROB WEILAND

Better (motor) boats
Low drag has played a central part in the long and successful design career of NIGEL IRENS. And nothing’s changed with his latest venture...

A shrine to sailing speed
Newport News, Virginia seems a fitting new home for a rather special ‘yacht’

Update
LUCA DEVOTI does not wholly agree with HUTCHINSON worries the America’s Cup is being turned into just another regatta and JACK GRIFFIN tries (hard) to explain what is about to happen with the scoresheets in Bermuda!

World news
SEBASTIEN JOSSE prepares to meet his monster, as THOMAS COVILLE speeds his up, scows rule (again), timeless in Auckland, gagged in the USA and who got there first? PATRICE CARPENTIER, IVORWILKINS, ROB KOTHE, DOBBS DAVIS

ORC column – Justice prevails
Yes at last we have a 2016 European Champion!

RORC – In the chocolates
EDDIE WARDEN-OWEN

Seahorse build table – Practical... and a thing of beauty
ORION SHUTTLEWORTH reminds us of a famous name in multihulls with a new design which we’d definitely be clearing out the shed for