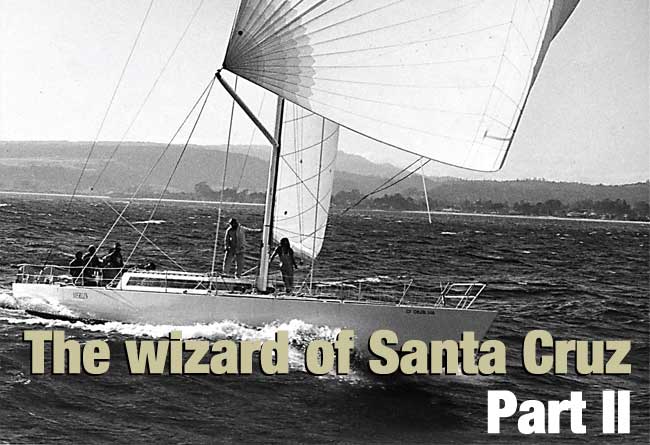 How could you ever write a story about BILL LEE without looking at the mythical tales of Merlin...

Bill Lee says that it was while onboard Panache racing to La Paz, Mexico in the autumn of 1973 that he had his eureka moment, prompted by a close interest in Ragtime, paying particular attention to designer John Spencer’s low-freeboards and slender hull form. This inspired Lee to consider how, rather than pursuing light weight with a flat, beamy hull for form stability, greater weight savings could be had by going narrow and more rounded in his hull shapes. So Lee refined the Ragtime concept, going longer, with slightly more beam, and with no chines, for a new boat that ignored every rating rule but would be guaranteed to be in Hawaii for ‘all the parties and not just the awards’, as he says.

It took a while but finally in 1977 Lee produced from his chicken coop a selfdesigned and built boat that would place him firmly on the world stage. Named after the Arthurian legend, the 67ft Merlin was at 12.5 tons about half the weight of peers of a similar length, much narrower and also with less sail area. While no great shakes upwind, Merlin exploded as soon as sheets were eased, planing away with effortless ease from the lead-mines of the day. From her first sail she was clearly poised to fulfil her destiny as a Transpac Barn Door Trophy winner.

However, today Lee also remembers how soon after her launch, in February 1977, he entered Merlin in the annual singlehanded race from San Francisco around the Farallon Islands… He won that race, but says that the experience was so humbl - ing that ‘it cured me of trying anything like that ever again’. Nothing broke, but for Lee it demonstrated the potential for getting into serious trouble when such a big, fast boat is sailed shorthanded. Never again did he trouble the solo genre. Bill Lee’s personal philosophy is clear: sailing should be fun and social, and you should not invite unnecessary risk.

To campaign Merlin seriously Lee assembled a strong team of eight who he also relied upon to fit out his new boat in time for its first Transpac. The truth was that Lee had spent every cent on building Merlin so by now he was himself ‘pretty much cleaned out’. Learning fast how to sail a boat that did not load up or slow down, the team overcame their closest rival, Drifter, not only to get to the Diamond Head finish first but also smash the course record by a remarkable 22 hours. At the ripe old age of 34 Lee had created a legend.