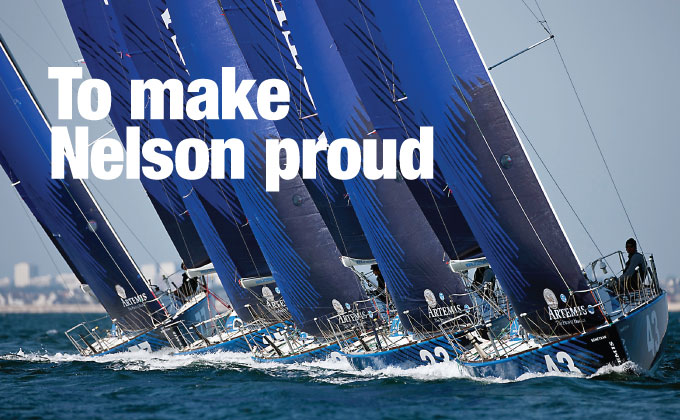 Set up to encourage British talent into the French-dominated solo offshore scene, the Artemis Offshore Academy is now in its second year. Former Figaro racer Marcus Hutchinson looks at the significance of this fast evolving initiative.

At the prizegiving ceremony of the 1998 Solitaire du Figaro in the main square in Concarneau, France in mid-August I stood with a huge number of locals and holidaymakers who had come to see the show. By the time the top skippers were called up the crowd was ready for the climax. The presenter called for multiple winner Jean Le Cam to step up: 'They call you "Le Roi Jean" because you are so dominant. This is your 17th participation, you have won it twice… Yet you still come back for more!

'Jean, tell us all why? What brings you back again and again to this tough race, sailing by yourself in a little boat, getting no sleep, offshore around the coasts of France, Spain and Ireland for three or four days at a time, in all kinds of weather? Why do you do it?'

Silence. Le Cam reflected for a bit before responding. 'It's difficult to explain. Standing here, telling you what it's like and why I do it. There is only one way I can share with you why it is so special and why I keep coming back. And that is for you to come with me next time and experience for yourself what I feel when I'm at sea by myself. There is only one way for you to understand the magic, the highs and the lows, the excitement and the monotony, your own personal strengths and weaknesses.

'You have to come with me to understand. But of course you can't! It's for one person only. You will never know why I do it unless you try it yourself. So come and try it yourself. Trust me. It's worth it. You won't regret it.'

Rapturous applause from the crowd, the band sparked up and the street party got underway. I could now definitely trust Jean. He was right. I had just finished my first Solitaire du Figaro, somewhere in the mid-20s overall in a 55-boat fleet. Now I too could relate to what he was talking about. And I could also relate to the fact that no one, without doing it themselves, would ever really appreciate or understand quite how special this kind of racing is.

Solo sailing is the domain of the French. Fact. Offshore sailing is practised at Grand Prix level much more by the French than anyone else. Fact. Several non-French initiatives have had success up to a point within solo sailing, but in terms of a career path the non-French initiatives pale into insignificance compared with what has been going on in France for the past couple of generations. Now in its 44th year the Solitaire du Figaro is at the heart of this successful culture. It is the training ground but it is also the event the big champions come back to, time and again, to check in and stay sharp and relevant.

The race has evolved from using IOR Half Tonners in the 1970s and 1980s before the first one-design class, the 30ft Bénéteau Figaro, was introduced in the early 1990s. Since 2002 the Figaro has been raced in a second fit-for-purpose offshore one-design, the 32ft Bénéteau Figaro II. The race has been the proving ground for young talent, equipment and techniques for all other forms of shorthanded sailing. In particular, this is where the development of highly sophisticated and robust electronic self-steering systems took place.

And yet the race's format has never changed and is as attractive today as it ever was. The key features are its four-leg format, each of roughly three days and nights, and most significantly a scoring system that uses combined elapsed time only to determine the winner – a much more interesting system for multi-stage ocean racing. 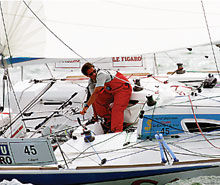 My own shorthanded experiences in the late 1990s came about more by accident than any great career choice. For work reasons I was living in France and had 'fallen in' with the solo racing crowd. My big break came when a young Michel Desjoyeaux, looking for a suitable foreigner to introduce to the scene, invited me to sail with him for a multiple-stage weeklong two-handed race around Brittany.

The night before the first leg we had a chat over dinner about how we would sail the boat. 'MichDej' was fairly well known in the French scene, having already won the Figaro race, but he didn't have the profile at the time of the likes of Le Cam or Philippe Poupon, both already multiple winners. 'You haven't sailed one of these boats before so you steer and I'll do the boat handling,' he said. Much to my surprise we went out and won four of the seven legs. But it was clear that all I was doing was acting as a 'huma n autopilot' for him, and that the real work was being done by the guy handling the boat and anticipating sufficiently far in advance what the next key decisions were going to be and then executing them perfectly at exactly the right moment.

Anticipation is everything. Speed, as in any yacht race, is fundamental but there was no point being fast in the wrong direction or being brilliantly fast for 60 per cent of a 400-mile leg before fading off to no better than mediocre for the last 20 per cent. In shorthanded racing self-management is all. The following year a boat became available at almost the last minute and I struck a deal with the owner and entered my first Solitaire du Figaro. Even after 35 years of this race with peak entry numbers of 60 boats, I would be one of the first dozen foreigners ever to compete.

I hardly had any money but MichDej and others were extremely helpful with advice, shore-based help, sails, gear and encouragement. 'We will get you around,' the future two-time Vendée Globe winner assured me. Fellow Irishman Damian Foxall, competing for the second time that year, was making a strong impression following a lot of hard work. But we two were the exception to the rule: other than French sailors no one really knew much about the importance of the Figaro to the solo racing scene. So why so few foreigners? Many reasons. The opportunities weren't particularly well promoted outside France.

Whatever way you look at it, major time and commitment were required and of course if you didn't speak French it was infinitely more complicated. Most of all, to get going required access to a boat, as well as financial and logistical support. These three ingredients were, and still are, in relatively plentiful supply in France but not for non-nationals. Not until now, that is. Fast forward 15 years and we have the Artemis Offshore Academy – with a raison d'être to develop singlehanded offshore sailors from 'north of the Channel' and set them on their way to one day winning one of the 'majors'… like the Vendée Globe.

The programme cycle takes five phases: Stage one is the selection trials, where candidates put their names forward, go to a trial event in Cowes in late summer, race two-handed and have their sailing CVs, motivation and attitude all assessed. Stage two sees five successful candidates sent to French training camps with their own boat and shore support to learn the basic and the more advanced elements of shorthanded sailing, partly in the classroom, partly on the water.

Stage three is start racing the following spring on the Figaro circuit, which for the most part features 200-mile coastal races with the occasional inshore windwardleeward thrown in for good measure. Stage four is the final assessment of skippers by the Academy board to decide whether they are capable of doing the big race – La Solitaire du Figaro – with its four back-to-back legs each of 250-500nm. The board will not send a candidate just because they have proved they can sail well solo. It also wants to believe the candidate has the potential to be a worthy competitive future offshore skipper, able to engage with the public, fans and, most importantly, with sponsors and their guests.

Stage five of the season entails the skippers racing Cowes Week in an IRC class with crews made up of Artemis guests. Yes, at the end of the day this 'solo sailing business' is a business. For the Artemis Offshore Academy to train up sailors to get themselves around the course without instilling that it takes money, sponsors and goodwill to make the world go round would be failing in its own guiding principles. And then the cycle starts again with the Class of 2013 getting their hands on the boats this autumn before heading off to France for stage one. In the Academy's second year, among the five sailor 'scholars' are Sam Goodchild and Nick Cherry, both part of the show last year, and now graduated to a second season.

The Figaro is an exhausting exercise in body-management, with sleep likely to be limited to no more than two hours a day – as demonstrated by 'le professeur' himself, Michel Desjoyeaux (below), seen on the way to his third race win in 2007. MichDesj's first Solitaire du Figaro win was in 1992… which tells a story in itself 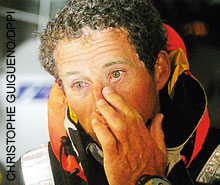 Goodchild is the only one to have actually done the Figaro itself and over the winter he also co-skippered a Class 40 to a dramatic Southern Ocean leg win in the Global Ocean Race. Cherry and Goodchild will compete together in the AG2R two-handed transatlantic race before this year's Solitaire du Figaro. While the 'seniors' are out of sight racing to St Barts the other three are racing around Brittany against the French fleet. Continuous assessment may see one of the three get the nod from the Academy board, which includes previous RYA chief executive Rod Carr, to be a third Artemis boat in this year's Figaro.

So who can get involved? All this is aimed at British passport holders and residents. And whereas to date there has been only all-blue Artemis branding, this is far from an exclusive operation. If an Olympic sailor, with existing personal sponsorship, trials successfully, then there is the opportunity to agree a joint branding package. What will you learn? The weather, the software, sail trim and tuning set-up, but probably more importantly the culture, the tricks, the language, the 'scene', management of media, partnerships, institutional relationships, administration. It's a long list. What is provided? A boat in top condition, coaches, maintenance crew, logistics, weather information, press officers, media outlets, transport and subsistence costs.

Everything to place a candidate at the same level of operational capability as the top French teams. Everything, and more. For most of the season there are five boats in the Academy team and the benefits of a squad environment are there to advance everyone's interests. Just look at the Olympic squads. What skills do you need? A defined and proven competitive sailing record goes without saying, but also a desire – or need – to explore new horizons while looking for the next stage in the career path that is professional sailing today.

Likely candidates include those on the back end of an Olympic campaign (perhaps not ready to return to the real world…), or experienced offshore sailors maybe tired of the crewed environment and looking for a new challenge. A command of the French language, though not essential, will definitely help, but above all a genuine motivation to understand what it was that Jean Le Cam was talking about all those years ago. 'The only way you'll understand is if I take you with me. But I can't for obvious reasons. It's for one person only.'

The Artemis Offshore Academy can give you the opportunity to see and to learn and to experience the most rewarding and personally fulfiling sailing you will ever do. Trust Jean Le Cam. You won't regret it. www.artemisoffshoreacademy.com