Into battle… Andrew MacFarlan, head of composite design at Red Bull Technology, describes how the manufacturing department keeps pace with the never-ending quest for aerodynamic improvement

Aerodynamic upgrades – relentless development
Once the ‘basic’ car is designed and built it is rolled out from the garage for the world’s press and fans to see. Within 24 hours it’s usually then straight into a busy few weeks of testing before the first race.

In 2010 pre-season testing consisted of four lots of four-day tests in Spain (Valencia, Barcelona and Jerez) during February. This testing is critical as it’s the only real circuit testing the teams are now able to ­conduct. As part of a raft of cost-cutting measures a couple of years ago all F1 teams lost the right to run testing sessions during the ­racing season, so now we’re restricted to Friday running at race meetings and a limited number of ‘straightline’ aerodynamic tests on runways or at suitable commercial proving facilities.

Pre-season testing is critical to confirming that the car behaves as expected, mechanically and aerodynamically. Other aims are to ensure fundamental systems and structures are reliable and that any faults are identified and resolved without fuss. But it’s also the first opportunity to improve upon the base vehicle.

It’s usual for teams to launch their ‘new’ car in mid-January, only to immediately undergo at least one full (and many minor) mechanical and aerodynamic upgrades before the first race in early March.

At Red Bull Technology these updates are truly relentless. From the 2010 season’s opener in Bahrain in March through to winning the constructors’ championship in Brazil and the drivers’ championship in Abu Dhabi in November each race was ­accompanied by a significant, if not major aerodynamic upgrade which, as mentioned in my first article, is what keeps us, in the composite design team, very busy – especially so if next year’s car design is taking place at the same time…

For each race the aerodynamic upgrades are likely to be a mix of fundamental redesigns of or detail modifications to:

To read on simply join us TODAY!!!!!
Please take advantage of our latest subscription offer or order a single copy of the April 2011 issue of Seahorse International Sailing

Below: Challenging and extremely unpleasant for the drivers, wet weather can occasionally provide those watching with a very vivid demonstration of Formula 1 aerodynamics 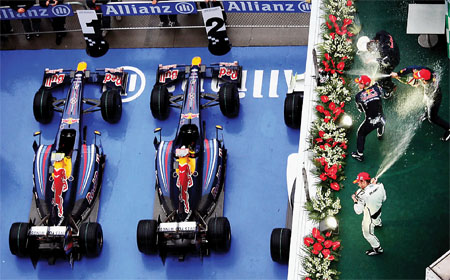