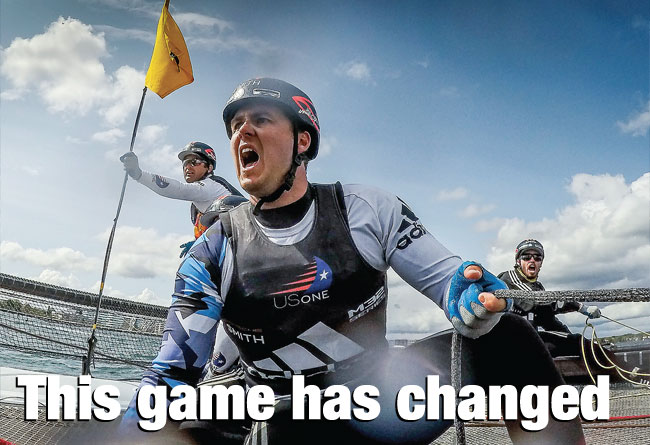 Following the switch from ponderous monohulls to M32 cats the rules of engagement on the World Match Racing Tour have certainly changed… and almost certainly for the better, says Andy Rice

At the beginning of the season the newlook World Match Racing Tour was billing itself as a #gamechanger on social media. However, when reigning world champion Ian Williams came out and won the first event held in M32 catamarans back in March in Fremantle, you had to wonder whether things had changed that much after all. 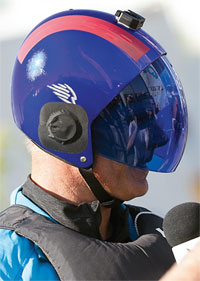 Since then, however, we’ve seen plenty of evidence that things really have shifted in a number of significant ways. At the WMRT event in Copenhagen in May the number of lead changes and the degree of uncertainty in the matches were unprecedented. In the keelboat days of the World Match Racing Tour the start was everything – or certainly an absolutely critical part of the contest. Approximately 85 per cent of the time the boat that led around the first windward mark would go on to win the match. That percentage is nowhere near as high in the new style of racing.

In the strong winds of Fremantle it was the first time we got to see the M32s and the first time we saw the use of high-speed reaching starts on the Tour. Winning the start was pretty important but now it wasn’t everything. In the predominantly lighter airs of Copenhagen sometimes the start mattered even less.

The 500kg weight of the all-carbon M32 means it responds to the slightest change of wind strength, which makes finding the strongest puff the over-riding factor downwind with the gennaker, and still very important on the upwind legs. A good start provided little guarantee of being able to defend that early lead.

One of the biggest gamechangers of all, however, has been the introduction of course boundaries up each side of the racetrack. These become particularly important when the course is at all one-sided.

Like many of the recent innovations in high-level racing (including the America’s Cup itself) – the use of a windward gate as well as a leeward gate, the reaching starts, the less expensive penalties – these boundaries aim to give the trailing boat a better chance of getting back into the fight.

It was pretty clear from watching the racing in Copenhagen that even the world’s best pro sailors are still working out what the new tactics are when you can be certain that the umpires will hand you a stop-go penalty if you stray beyond those course limits.

Chris Steele was one of 20 skippers in Copenhagen who at times were almost as focused studying the racing from the shore as they were on the water in their own matches. Everybody else’s matches are a vital opportunity to learn the winning – and losing – moves before once more submitting yourself to the learning process in your next match.

‘A lot of new scenarios are developing as you go around the racetrack,’ says the young Kiwi. ‘We’re still learning the playbook. Or rather we’re writing it as we go along and trying to make the most of every practice opportunity; the more you practise, the more instinctive you become at making the right moves.’

In Copenhagen Steele went out relatively early in the competition, falling 3-1 to M32 rookie Iker Martínez in their Super 16 knockout round. Where others booked early planes home, though, Steele stuck around to learn as much as he could from the shore. He wants to minimise the loss of experience compared with those who progressed to the later rounds. ‘The further on into the competition they get, the more and more practice they get in the M32, and right now time in the boats is massive.’ 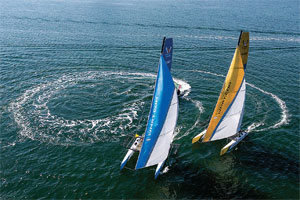 Full face helmets, crews bouncing and sprinting across their lightweight and fast-accelerating new boats… but there’s still room for some serious old-school match racing (above) although with a new and much more modern twist. The change in ownership of the World Match Racing Tour and the switch to a multihull platform has both re-energised the circuit and brought it back into harmony with the biggest match race of them all – the America’s Cup. A lack of jibs on the M32 cats only adds to the aggressive possibilities

Some of the old rules of match racing are irrelevant, as a number of skippers have found to their cost. Trying to execute a slam-dunk or a lee-bow tack on your trailing opponent is extremely risky and will mostly result in you getting rolled… to windward or to leeward. Williams, the sixtime match racing world champion in keelboats, looked to have it all worked out in Fremantle where he dropped just one match in the whole of the competition. It was a very different story when he was taken to 2-2 by young Australian Evan Walker in Copenhagen. Williams did clinch the final race to go through to the quarter-finals but went no further after losing 3-1 to Yann Guichard and Spindrift.

Whereas the likes of Williams, Taylor Canfield, Johnie Berntsson and other experienced match racers have been working hard to learn the ropes in high-speed multi hull racing, Guichard typifies the other kind of sailor who has been drawn to the Tour this season. He has almost no match racing experience, but brings other vital skills to the party. The lifelong multihull sailor has campaigned Tornados for the Olympics, steered AC45s and Extreme 40s, and skippered Spindrift 2 in the giant trimaran’s attempt on the Jules Verne Trophy last winter. In fact, the quiet Frenchman was the most consistent performer during the early part of the season, being the only skipper to reach the semifinals both in Fremantle and Copenhagen.

But in Denmark his run came to an end up against Canfield and US One. The talented skipper from the US Virgin Islands is arguably the most complete package on the Tour at this stage, with both great match racing pedigree, including the 2013 world title, and a good 18 months’ experience of M32 racing. In the final Canfield was pushed hard by another sailor with great pedigree, Iker Martínez, but who has next to no match racing experience. The Spaniard drew on all the talent that has yielded gold and silver 49er medals at the Olympics, and his tenacity gained from skippering three Volvo Ocean Race campaigns. But Canfield’s superior firepower in the M32, and in the pre-start, won through in the end.

However, even Canfield very nearly came unstuck against American skipper Sally Barkow and her female crew on Team Magenta in their Copenhagen quarter- final battle – a tussle that went down to the final mark of the fifth and final match.

Ominously, Canfield had been sniffy about what he perceived to be a comedy of errors between Barkow and Johnie Berntsson in their previous match which also went down to the wire. Multiple lead changes in every match had left that outcome in doubt until the very last gasp before Barkow fist pumped her way through to the quarters, much to the whoops and delights of a Copenhagen crowd who wanted to see the one female skipper go as far as possible against 19 male opponents.

In the last two matches against Canfield it looked as if Barkow could again square it away and book her place in the final four. But US One has always prided itself on a ‘never say die’ attitude and this, combined with a lucky gust, carried Canfield past the hapless, drifting Team Magenta, eliminating Barkow from the competition. No fist pump this time from the American, but a helmet ripped off her head and flung down on the trampoline in frustration.

For Steele watching on, he shared Barkow’s anguish but also made some solid tactical observations. ‘The default move is you’ve got to make sure you protect the inside at the final turning mark to the finish,’ he said afterwards. ‘The girls could have won the last two matches if they’d done a gybe-set at the top of the final run to get in phase with Taylor.’

The most counterintuitive move, now that the boundaries are there, is to choose the opposite rounding mark to the side that you believe to be favoured. ‘Normally you’d go around the gate that takes you to the favoured side,’ says Steele, ‘but now the game’s a lot more about “where you are willing to give up time now, to get a gain later on?” One of those potential gains is to go to the opposite rounding mark so that you can tack over later and spend more time on the favoured side of the course before you reach the boundary.’

Some skippers don’t like the boundaries, full stop. But it looks as if they’re here to stay. And for the grand finale in Marstrand, where the winner becomes the 2016 world champion and takes away a cool $1million in prizemoney, the boundaries will be real… hard lumps of ancient Swedish rock that will come off a good deal better out of a collision than a carbon M32 catamaran.

The game has changed and in Marstrand we’ll see which team has pulled off the best transformation to meet the new demands of the World Match Racing Tour.