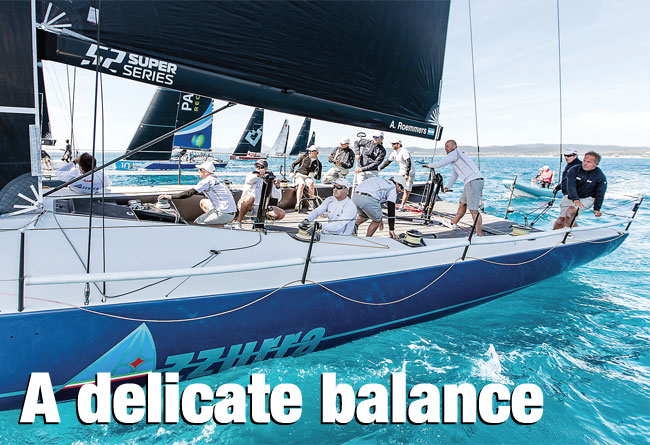 But TP52 and Maxi72 manager ROB WEILAND is just the sort of benign dictator to pull it off...

We had a great start to the 2016 Super Series in Scarlino, Tuscany, raced from the well laid out Marina Scarlino owned by Leonardo Ferragamo of Nautor Swan fame. Eleven boats at the start, battle hardened by a tough 2015 season, modified and upgraded over winter to do even better in 2016 – and sure enough more even in performance potential now than many one-design fleets. Behind an impressively consistent Quantum Racing it was a good battle between six or seven teams for the other two podium places, and perhaps even fiercer was the battle to avoid being last.

Some of the tacticians were more in phase with the often fickle and hard-to-read conditions, especially Alegre’s past 470 world champion Nic Asher and the ever sharp Terry Hutchinson who both made a solid impression. The designers’ battle, or if you wish the boat optimisation battle, has reached new levels of perfection in the sense that the teams seem able to read their boats much better and optimise more confidently for the daily conditions than last year. I feel that the work that went into the rigs and sails this winter is one part of the reason for this, but surely the game is more even now that all boats are able to set up for the high upwind mode that you need to survive in the tight 11-boat field.

Looking ahead to 2017, we have three points of interest coming up. First the announcement that our schedule for 2017 will once more include Quantum Key West Race Week plus an event in Miami, this time labelled the Miami Royal Cup; the Royal Cup Challenge Trophy, which was donated in 1995 by King Harald of Norway, Pasquale Landolfi, Willi Illbruck and Yannis Costopoulos as a challenge trophy for IMS50 racing, has now been reassigned to one of each season’s 52 Super Series events and so it will travel across the Atlantic for the first time. To get your name on this trophy ain’t easy, whether in 1995 or in 2017.

Going to the USA continues to be an important part of the 52 Super Series success. The fleet is truly international and many of the owners and sailors come from the US. Through Doug DeVos and his Quantum Racing there are strong ties with Quantum Key West Race Week and its organiser, the Storm Trysail Club. Miami has provided us with some of the best racing the class has seen over its 15 years of existence. Who is not thrilled to race in 20kt+ against the iconic backdrop of South Beach and its mix of high-rise and Art Deco buildings?

That has the first two events covered – later this summer we will announce the four Mediterranean Super Series events and the location of the 2017 TP52 World Championship. Nearer to this year’s final event in Cascais I also expect to be able to confirm further upgrades in our positioning as today’s leading grand prix monohull circuit. Bit cryptic, but it is better not to print the menu until all the ingredients are confirmed.

Of course in the USA we hope to see a few US-located TP52 teams joining our racing. One of them is the confirmed entry of Gwen and Austin Fragomen’s brand new Botín Partners-designed Interlodge that is now being built at Longitud Cero in Spain; a boat that is rumoured to have a few new ideas along with some interesting developments from the current successful Botín designs.

In a country as large as the USA, it is notoriously difficult to persuade owners to agree on what, where and how to race, resulting in a fragmented picture and low participation numbers in big boat racing. 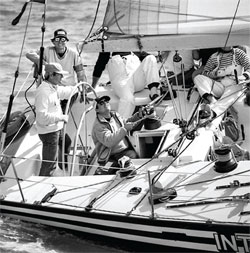 Top: there’s no two ways about it, you just have to feel sorry for the TP52 Super Series fleet as they are forced to roam the world in search of the best destinations for their next event – run the racing for the owners who are paying for it and they will come. The writer makes the exact same point that in relative terms there was no more money about 30 years ago when Two Tonners like Intuition raced big events like the SORC (above)… All is not lost

I fondly remember the days I came over to Florida as a young man crewing on the Peterson 43 Caiman – amazed to see the enormous fleet of top big boats assembled for the annual SORC. I feel the lack of agreement on an international handicap system for true raceboats resulting in fewer, if any, true international championship events for rated boats is a major driver in the decline and disappearance of such hugely exciting and super-competitive regattas.

For sure it is not the only reason and everybody is entitled to their own opinions. But please do not tell me that in the 1980s the owners had more money and more time for their hobby.

Those days it was an honour to sail for your country and win or defend a proper title, it simply was worth it to invest the money and to create the time. Again a simplified view, but not without touching the essence.

By positioning the 52 Super Series as the world’s leading monohull circuit, created and supported by TP52 owners from three continents, combined with trying to diminish the tension of competition at this high level by keeping it relaxed both in terms of race format and on the shore, in a way we are trying to recreate the hunger and motivation that we saw in the past.

The owners driving the series, as well as most of their boats, I feel are the essence of our current success; and for sure the TP52 being a development class box rule boat, allowing you to create one-off perfection without losing sight of a realistic competitive lifespan, has something to do with it too.

It is an ongoing debate whether we should take what is in some eyes the obvious next step – require all the boats to be owner-driven or at least open to Group 1 drivers only.

So far a majority of current owners support the ‘open-driver’ concept. Sailing against the best is seen as inspirational. But sometimes also as a steep task. The closer it gets the more every small detail matters and it does not get any closer than at the first windward mark of a Super Series race.

There you sometimes see that the pro driver and the owner-driver live by different ethics – but based on the same rules of sailing. And although it is hard to explain the exact difference (for sure you also see differences within the ‘categories’) the perception is a real one, and when the debate continues on the shore you usually hear terms like ‘professional foul’ or ‘professional attitude’… indicating the real source of frustration.

I have no real solution to avoid such frustration, other than to say that both sides have to take responsibility to find common ethics for this specific element of our unique sport.

As organisers we have a few weapons to ‘soften’ the game, like on-the-water umpiring and ‘protecting the zone’ by laying a windward inner mark. However, ideas of ‘putting gloves on the fists’ or of heavy policing hardly ever receive wholehearted support from sailors, owner-drivers and officials.

The conceptual development that we so much enjoy when putting together our boats seems difficult to translate to the human element. But at least we discuss and we try, whether owner, pro sailor or organisation. And I am proud to see us doing so.