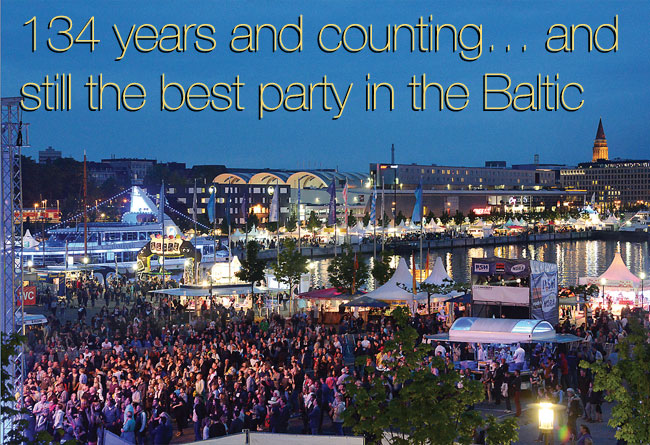 A pre-Olympics Kiel Week is always a bit special

Sailing weeks are now a common format for regattas held all over the world, thanks in part to the continued success of the largest and the oldest one of them all: Kiel Week. Started in 1882, this annual event held in the last full week of June is in its 134th edition this year and has grown to attract thousands of sailors from dozens of nations to celebrate the spirit of competition in an energetic setting that also offers the best of German hospitality and culture.

This year over 4,000 sailors from 50 countries are expected to participate in 28 classes at Kiel Week, ranging from one-design boat-for-boat racing in the smallest dinghies to racing both inshore and offshore under handicap in offshore racing yachts. For nine days there are boats of all types sailing and racing in and around Kiel, making this truly a festival of sail: no other competitive event in the sport enjoys this level of attraction.

And being an Olympic year, one of the big draws is seeing the very best performers who will be heading to Kiel to hone their skills one last time before making their final push towards earning medals in Rio. Being just six weeks before the start of the Games, Kiel Week will be the last big performance test for these sailors before they meet each other again in Brazil on the quest for Olympic gold.

This year’s Kiel entry includes 49er medal favourites Pete Burling and Blair Tuke, unbeaten Kiwis in the class for the past 26 regattas (sic!). The 470 class will feature six-time world and 2012 Olympic champion Mat Belcher and his crew Will Ryan, whose entry to the event from down under in January demonstrated a strong early commitment to compete in Germany. They will be facing numerous teams from Europe and beyond, including of course the Olympians representing Germany – strong favourites among the local audiences who will be giving their farewells to their team before they head to Brazil.

But these teams come to Kiel Week for more than just the high calibre of competition: they also come for money. In each Olympic class a total of 6,000 euros will go to the top three teams on the podium. And as they do battle throughout the week on 11 course areas set in the outer fjord, the audience of thousands ashore can follow all the action, with cameras, drones and commentators providing live coverage on giant screens placed both in the village at Schilksee Harbour and in the historic city centre of Kiel itself.

Yet Kiel Week is not only about showdowns between Olympic stars, it is also about the awarding of other important prizes: this year four German, one European and one world championship titles will be awarded among the competing classes.

For example, in the Nacra 17 Olympic catamarans the German entries are also competing for their national title, as they are in the Paralympic 2.4mR and Sonar classes. The junior 470 world championship title will be determined in Kiel, and about 80 J70s are expected for only their second European championship.

And for the big boats there is a variety of races for all levels of interest: short coastal races at the weekends for offshore-oriented teams, including an overnight race, and inshore windward-leeward races held on the outer fjord area. The best offshore racers from Germany and the Baltic will come to Kiel to compete for German titles in classes defined to coincide with those used at the ORC worlds a month later close by in Denmark.

Sailing is always the sporting focus of Kiel Week, but the attractions ashore are what engage the wider public into also making this event the largest public festival in northern Europe; during the regatta the city centre is transformed into one huge stage, with more than 2,000 events for more than three million guests.

For nine straight days rock, jazz and classical concerts are scheduled, artists present their talents on the street, kids play on a huge adventure playground and culinary treats from both Germany and all around the world are on offer to all.

And with a parade of tall ships and parallel regattas for many of the great classic racing yachts, including a good fleet of 12 Metres and 5.5 Metres racing on the inner fjord, in Kiel the festival and the sport of sailing truly meld together to become a huge and remarkable event… one not to be missed.