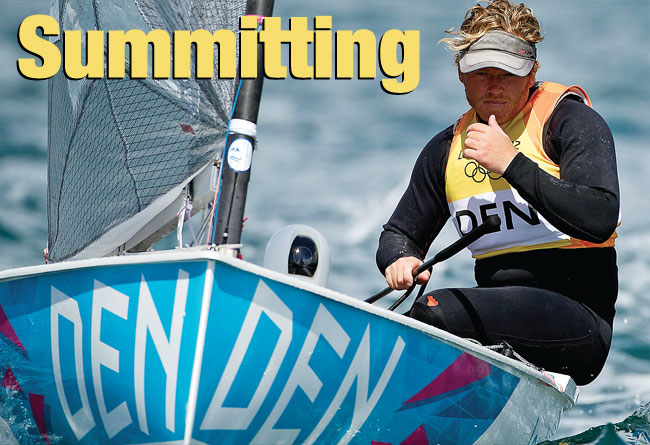 Dealing with the unfinished business

When an Olympic sailing heavyweight says ‘I think going to the Olympics is rather like climbing an Everest’, you get a feel for the commitment and determination required to reach the top.

The Olympic Games is the pinnacle of sailing, also reaching an unrivalled number of sports fans. Stars are born on the journey through the Youth Sailing World Championships and into the Sailing World Cup, but they come of age at the Olympics. It’s where dreams come true, heroes are made and sailors become national property.

The narratives within each Olympiad are some of the most compelling you will find anywhere, and when even getting there is described as climbing the world’s highest peak you know the main event will be a blockbuster.

‘I talked to a well-known mountaineer recently… he climbed Everest and he was like, you get down from the mountain and you look at it and think, can I go somewhere even higher or even more challenging,’ explains Jonas Høgh-Christensen, London 2012 silver medallist and two-time Finn Gold Cup winner. ‘To me that is the same thing: I look at the Olympics and it is the biggest challenge you can have in sailing.

‘Going to the Olympics is like climbing one of the great peaks. It’s what keeps drawing me back and going for the Games. There are times that you are going for a run and it’s raining and freezing but you just have to keep on up the mountain. It is physically tough to keep doing this every day, but everybody wants to try to win an Olympic gold medal, it is our own particular Everest.’

Høgh-Christensen faced up to his mountain at the 2012 Olympic Games. He famously battled Great Britain’s Ben Ainslie in one of the most gripping contests of London 2012. One was aiming to become the most decorated sailor in Olympic history, the other was aiming to make existing record holder and fellow Dane, Paul Elvstrøm, proud.

In front of a capacity crowd in Weymouth it was who dares wins in the Medal Race with the victor etching their name in sports history. One of the great Olympic battles ensued and it was Ainslie who pulled in all of his experience to fend off the Dane to become king.

Høgh-Christensen was left slumped in his Finn, the onboard camera showing an immediate, live impact as the disappointment hit. Ainslie’s legacy was secured as he bowed out of Olympic sailing, but for Høgh-Christensen there was unfinished business.

Thinking his time was up after London 2012 he stepped away from Olympic sailing, returning to work in the music business. But having reflected more on his achievements, the lure of the mountain was too great. The need to go somewhere higher, continue the challenge, saw Høgh-Christensen make a comeback at the Santander worlds in 2014 and now he is a serious contender for Rio 2016.

In Rio, though, the Great Dane has a new foe. Stand up, Giles Scott, heir to Ainslie’s throne. Scott heads into the Games as the unprecedented favourite to continue Great Britain’s remarkable Finn story. Ask those in the know and Giles Scott is the man who ‘should’ become the new king of the men’s heavy singlehander.

On paper Scott is certainly the Finn favourite, but in the 49er Peter Burling and Blair Tuke (NZL) are near enough nailed on certainties to upgrade their London 2012 silver to Rio 2016 gold. Incredibly they remain unbeaten in the Rio 2016 quadrennial, hold four consecutive world championship titles and are the current Rolex World Sailors of the Year. They are sailing’s hottest property.

Their dominance is frightening – not even great champions like the London 2012 and Beijing 2008 gold medallists Nathan Outteridge and Iain Jensen (AUS), as well as Jonas Warrer, now sailing with Christian Peter Lubeck (DEN), have even come close to beating them. The two young stars of Emirates Team New Zealand are quite simply head and shoulders above the rest.

The Kiwis’ four world titles in an Olympic quadrennial had never before been achieved, but Billy Besson and Marie Riou (FRA) matched them in the Nacra 17. The Mixed Multihull will make its Olympic debut in Rio and no other sailor has ever held a Nacra 17 world title! If they continue their form then expect them to reach the first Nacra 17 Olympic summit ahead of the chasing pack.

Further dominance in the Olympic scene is seen in Mat Belcher and Will Ryan (AUS) in the Men’s 470. They have won 31 champion - ship medals since their first event in 2012, 21 of which were gold. Gold at Rio 2016 would cap off a remarkable four years.

Three hundred and eighty sailors from over 60 nations will compete in Brazil. Each individual will have set a target and whatever that individual target is it’s still going to take the effort required to summit Mount Everest to get there.