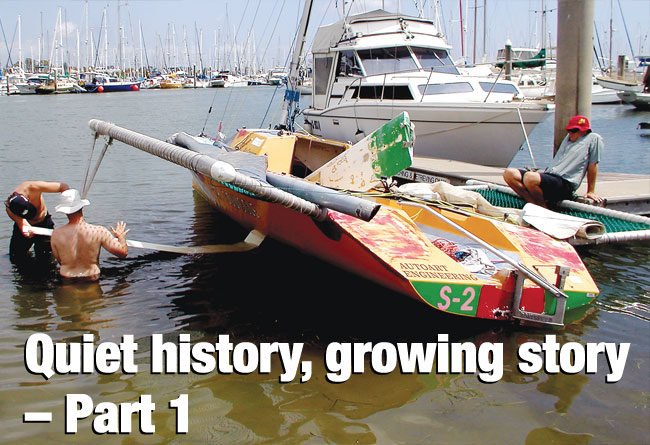 The DSS Dynamic Stability System is gaining traction. With Farr Yacht Design the latest office to add a DSS yacht to their repertoire, this is no longer quite the eccentric avenue that early critics claimed. McConaghy Boats are also currently preparing a new line of series-built 46 and 53ft DSS designs…

Hugh Welbourn and I started working on projects together back in 1999 when he helped with the upgrade of the former Whitbread Maxi Martela, which we raced with some success including a class win in the 2001 Sydney Hobart. This led to Hugh being selected to design the 93ft Bols which we built in 2002 and was nudging towards being the first ‘real’ DSS boat – now that would have been something, all those years ago.

Hugh had already had the idea for DSS and had presented it to Ellen Macarthur’s team for their Imoca 60 two years previously, but it was understandably considered a little too radical for such a career-critical project.

But it was during the build of Bols that Hugh began to look at DSS more seriously. For Bols, however, DSS was a step too far – we already had plenty on with the boat including building the most powerful maxi of its era, the first to use a retractable propulsion system… and then there were the trim tabs on the transom. But the seed was sown and we began to look seriously at the potential of the system in 2003.

We started with radio-controlled models, moving up to a retrofit on a Boatspeed 23 in Australia and then a 27ft scale model of a 30m design that we had already tank tested. Finally, after years of testing we felt we were ready to present DSS to the world at large… just as the global economy collapsed.