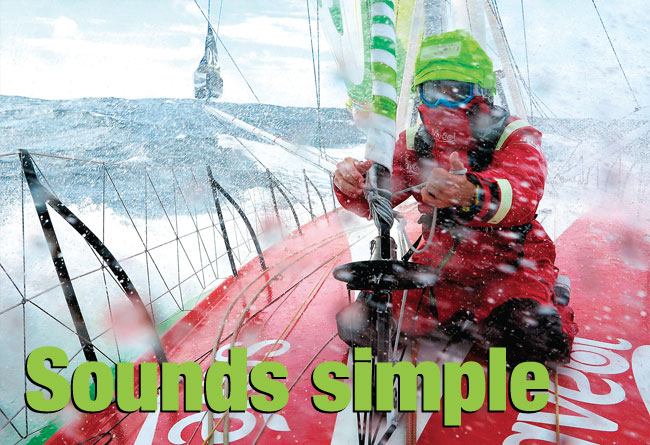 One sailor, one raceboat, one simple non-stop course, but a mix of extraordinary commercial and sporting challenges combines to make the Vendée Globe one of the toughest events in sport. Two-time Vendée veteran and recent Volvo race skipper Sam Davies explains the magic

2016 is a big year in France for sailing. The Vendée Globe is the Everest of yacht races and is followed massively by the French public. I think that it is the obscurity of this adventure that draws the public’s attention: to sail non-stop, singlehanded around the world is a pretty crazy feat. Most of the people who follow the race have never stepped on a boat themselves, but the concept is easy to understand and simply the idea of spending three months (including Christmas and New Year) alone on a boat is quite easy to imagine and that in itself is something quite ‘interesting’!

The Vendée Globe is a great tool for the school teachers. It starts in November, and in France we hype up the race as soon as the Olympic Games finish which usually corresponds with the start of a school year in September. Teachers can start work with their classes to follow the race with the many ‘kits’ that are provided free by the race organisers and also by many of the teams. We travel around the planet, cross the oceans, encounter all types of weather… the kids can study the Vendée Globe and do geography, maths, languages, science, art, the subject matter is endless.

The race continues through the Christmas holidays and past half-term, with the prizegiving during a May bank holiday in les Sables d’Olonne (compulsory for all skippers – it is there that you get your entry deposit cheque returned to you!) This means that the schools follow the race for almost two-thirds of their year. No wonder this race is so popular in France, and has so many non-sailing fans.

It becomes easier to understand why we can secure sponsors in France for the Vendée Globe when you see what a huge impact this race has on the French population. Ideally we want to be able to start preparing for the race as soon as we have completed the previous one (like an Olympic campaign); and thanks to the Imoca class there is now a circuit of races between Vendées that provide sponsors with a continuous return on their investment and the skippers and their teams with some great races around the globe.